‘Boxing is in great hands’ – what’s next for history-maker Alvarez? 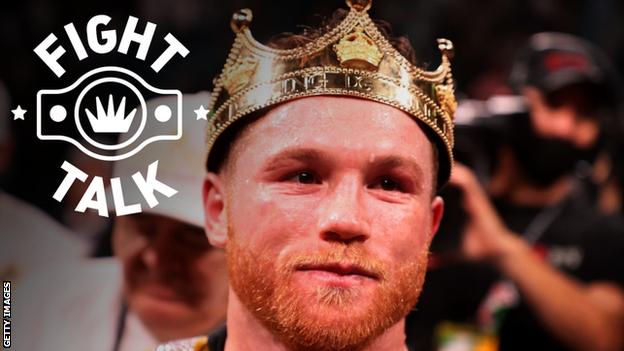 The boxing world reacts to another explosive finish from Saul ‘Canelo’ Alvarez as the Mexican cleans up the super-middleweight division – but where does he go from here? Defend the belts, move up a division or maybe even fight in the United Kingdom?

Plus, after Manchester United’s 2-0 derby loss to Manchester City, we find out which world champion is taking matters into his own hands. It’s Fight Talk – your weekly fix of boxing news.

‘Boxing is in great hands’ as Canelo makes history

Before Saturday, Saul ‘Canelo’ Alvarez was already a boxing superstar.

Then on a history-making night in Las Vegas, the Mexican cemented his place at the top of the pound-for-pound list with an 11th-round knockout win over Caleb Plant.

The king of world boxing strutted around the ring with a crown placed firmly on his head as fellow fighters, past and present, witnessed yet another special performance from the 31-year-old…

On 29 October 2005 in Guadalajara, Mexico, a baby-faced Alvarez made his professional boxing debut aged just 15.

Sixteen years and 60 fights later, Alvarez boasts a record of 57 wins, two draws and the one loss to Floyd Mayweather in 2013.

Alvarez – a four-weight champion – becomes only the sixth fighter to become undisputed champion since the WBO began sanctioning world-title fights in 1988.

Such is the confidence of Alvarez, he delivered the knockout blow to American Plant with the word ‘undisputed’ already etched on his glove, and then moments after the win he slipped into a custom made jacket… 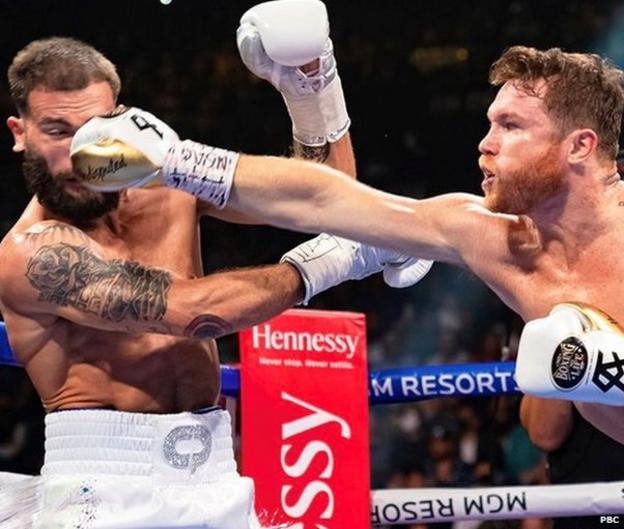 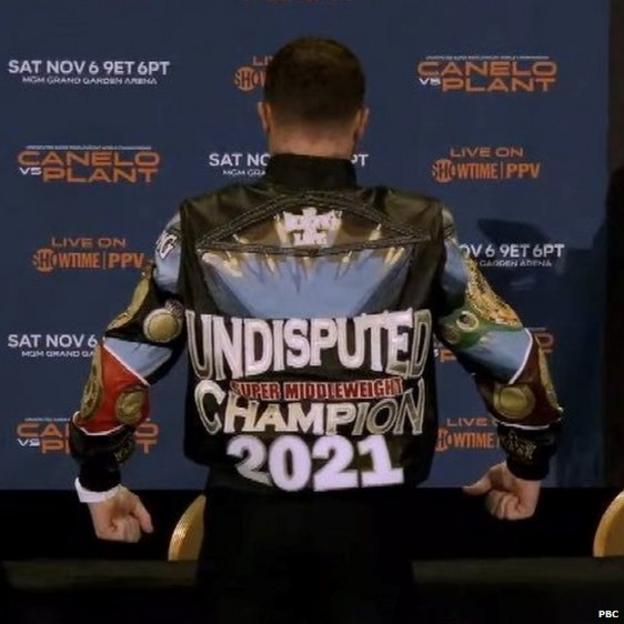 Alvarez is arguably the best active fighter today and undoubtedly a future hall-of-famer, but his name may well now enter the debate of who is the greatest Mexican fighter of all time.

That’s some going when you consider Mexico has produced boxing royalty such as Salvador Sanchez, Julio Cesar Chavez and Marco Antonio Barrera.

What next for Canelo?

Having fought four times in the last 11 months on his road to undisputed, Alvarez says his “body needs a rest” and his next fight will take place in May.

American boxers David Benavidez or Jermall Charlo are possible opponents at super-middleweight, while Derby’s Zach Parker is mandatory for the WBO belt.

A more likely scenario would see Alvarez moving up a weight class in a quest to dominate the light-heavyweight division.

Having beaten Russian Sergey Kovalev to win the WBO title in 2019, Alvarez has already shown he can excel at the higher weight class.

Joe Smith Jr is the WBO light-heavyweight champion and Dmitry Bivol holds the WBA belt, while Artur Beterbiev – the unified IBF and WBC champion who has knocked out all 16 opponents – is perhaps the riskiest option.

Promoter Hearn has suggested he could bring Alvarez to the UK at some point in the future, with light-heavyweights Callum Johnson, Anthony Yarde, Joshua Buatsi – or even a rematch with Liverpool’s Callum Smith – possible.

British fighters will be queuing up for a big money payday against boxing’s hottest property but it’s a tough ask; Alvarez has already notched up wins again seven Brits, including Amir Khan and Billy Joe Saunders.

Whether it’s in the UK, a homecoming Mexico fight or a lucrative clash in the Middle East, Alvarez has options.

But for the time being, the boxing world can appreciate another truly wonderful performance from a spectacular boxer.

Fury’s warning to the men in Red

He has ‘fought’ in the scripted world of wrestling entertainment, starred in his own reality TV show and even tried stand-up comedy, there are many bows to WBC heavyweight champion Tyson Fury’s bow.

But can the Morecambe fighter inspire one of the world’s most famous football clubs to turn round a string of bad results?

United lost 2-0, prompting Fury to share this message to the players…

The Old Trafford dressing room has endured the wrath of Sir Alex Ferguson in years gone by, but a verbal beatdown from 6ft 6in, 19 stone Fury would take things to another level.