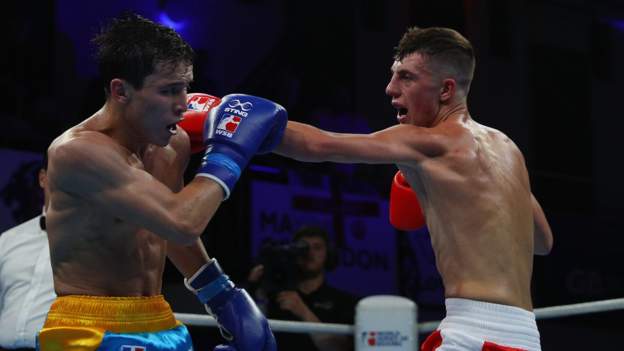 Six medals at the Tokyo Olympics was the best return for Great Britain’s boxers for a century. So how do you follow that?

With a mix of youth and experience – and start them out in a major championship.

The established team from Tokyo in the summer are being rested so GB Boxing have named a new-look England squad for next week’s World Championships as they begin the shortened cycle towards Paris 2024.

One of the most experienced heading to Belgrade is lightning-fast featherweight Niall Farrell.

He has been with GB Boxing for six years but his time with the team has been interrupted by serious injuries.

“When I got on the team I had a sore hand, but boxers always have sore hands,” Farrell told BBC Sport.

“In 2018 it was at its worst, I couldn’t even clench my fist. When the doctors opened it up they realised every time I made a fist it was just bone coming through. It was heartbreaking, I’d worked all my life to get to Team GB and I feared they might get rid of me.”

They didn’t get rid of him, and Farrell continued working on his shadowboxing skills in his dad’s gym in Birmingham. But the same problem resurfaced when he started punching again.

“The doctor told me he had to operate again. Everything came crashing down,” he added.

But instead of moping around, the 24-year-old used his time out of the ring for good.

He started working as an ambassador for a homeless charity, as well as helping to set up and run Support Futures – a non-profit organisation that helps rehabilitate and educate young people in the Black Country through sport.

“I kind of clocked boxing won’t always be there,” said Farrell. “I was able to focus on trying to help people and supporting the community.

“It’s always been about boxing for me, but now I’ve got something outside of boxing, helping people and inspiring people.”

Farrell is the only member of the World Championship squad with a major medal, but his European Championship silver came in 2017 before his hand trouble.

Now he splits his time between the ring, his charity work and fatherhood. Farrell added: “It’s a lot to juggle but I’m loving every minute of it. The day I saw my daughter, I can honestly say there’s no better feeling.”

Like the young people he helps, Farrell has been given a second chance in boxing. His hand is fixed and he is not shy about his ambitions, starting later this month in Belgrade.

“I’m gonna become a world champion in the amateurs,” he said. “Then when the time is right I’m going to light up the pro game as well.”

Before the bright lights of the professional world can lure him in there’s a mid-term goal of representing Team GB at the Olympics in Paris in three years – and next year the Commonwealth Games takes place in his home city.

“That is a dream come true,” added Farrell. “I’ve got a good fan base who come over to Croatia and Serbia with me. In Birmingham? I’m gonna take the roof off.”

The England team for the men’s ALBA World Championships: