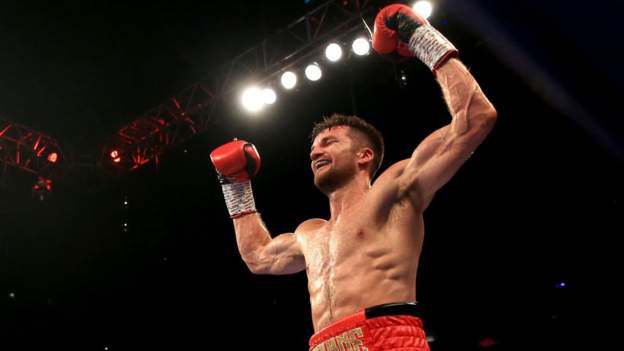 Five days before a crucial fight in July, Anthony Fowler was “crying his eyes out”. His son had just been born and Fowler spent three sleepless nights at the hospital with his partner.

It was far from ideal timing for the 30-year-old, who had to fight Rico Mueller in a light-middleweight bout a few days later.

Just 10 weeks on, Fowler is on the cusp of the biggest contest of his career against fellow Liverpudlian Liam Smith in their home city, while little Luca is still getting to know him.

“He barely recognizes me. I’m always away training,” says Fowler, who spends weekdays in London training under Shane McGuigan.

“I literally had three days in the hospital. Didn’t sleep, stuck on a chair, I was knackered. There was such a high when he was born, crying my eyes out. It was such a special feeling.”

Fowler suspects the emotional rollercoaster of Luca being born affected his performance against Mueller, although he still dominated to stop the German in the eighth round.

He expects an improved display against domestic rival Smith on Saturday but insists fatherhood has had no effect on his motivation for fighting.

Fowler tells BBC Sport: “This is my dream as a kid to be world champion since I was 11. Nothing’s changed there.”

Smith, 33, and Fowler know each other well having grown up in the Merseyside boxing scene.

Fowler remembers a sparring session between the pair where he wilted in the heat of Joe Gallagher’s gym – or the “sauna” as he put it.

“He was much better than I thought,” he recalls.

“I went back and sparred him again, I adjusted – it was good sparring for me.”

The pair will now face off in front of a Liverpool crowd expected to be split down the middle.

Fowler says the city is “buzzing” for their bout, but has been left confused by some of the comments Smith has made since it was announced.

Smith claimed he would “never” lose to a domestic rival and questioned whether Fowler would ever be able to compete at a world-class level.

Smith also refused to shake Fowler’s hand at the news conference in August and predicted his opponent would fade after four rounds.

“I don’t really understand what he’s talking about,” says Fowler.

“I was surprised, to be honest. There’s no bad blood between us.

“I even texted him at the start of the year: ‘Fancy doing some sparring?’ He said: ‘Yeah, sound’.

“So I don’t know where that’s come from. It doesn’t really bother me.”

Fowler is adamant he will not allow himself to be affected by the big occasion or a big crowd.

“I’m doing it for myself, not anyone else,” he says.

The more experienced Smith will be favorite, despite suffering a controversial defeat on points in his last bout against Magomed Kurbanov in Russia five months ago. His only other losses are to world champions Jaime Munguia and Saul ‘Canelo’ Alvarez.

Fowler is on a six-fight winning streak since a bruising defeat by Scott Fitzgerald in 2019 – an outcome that left him “shocked”.

He adds: “I am the underdog, technically, because I haven’t boxed at the level Liam has, but that doesn’t really matter.

“It’s all about now. He’s not fighting much, he’s very inactive. I’m active.

“I’m going off four hot wins with a new coach. I’ve improved a lot. I’m coming into my prime.

“I look at him as a man, two arms, two legs, same as me. Come the night, the fella who is best prepared to win will win.

“It’ll be a hard 12 rounds. A really brutal and nasty fight. Boxing is a brutal sport and I think this fight will be brutal.”