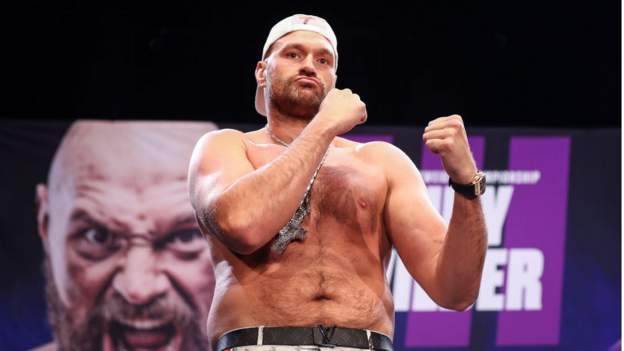 Frank Warren expects Tyson Fury’s next fight after his bout against Deontay Wilder to be in the UK.

The WBC heavyweight champion has not fought on home soil since 2018.

Fury, 33, has made the United States his boxing home since signing a long-term deal with Top Rank and ESPN and has competed there four times.

“There’s no Yanks out there for him to fight. I think he’ll be back here which will be a great homecoming,” co-promoter Warren told BBC Sport.

Fury will have to get past American Wilder, 35, first on Saturday in Las Vegas, and the ‘Gypsy King’, who is the odds-on favorite to win, will be wary of an upset after watching Anthony Joshua get beaten by Oleksandr Usyk at Tottenham Hotspur Stadium last month.

“If Tyson wins the fight we’ll sit down. There are a few options there,” Warren said. “Usyk would be a massive fight here. The Joshua fight is still a massive fight.

“Dillian Whyte is a big fight, providing the beats Otto Wallin which isn’t a foregone conclusion. There are some big fights for him.”

One fight which appears to be sidelined for now is the Joshua bout. Talks over a fight to unify the heavyweight titles last summer broke down and Joshua is now tasked with reclaiming the WBA, IBF, and WBO belts he lost to Usyk in their rematch, which is expected to take place in February 2022.

The loss of a potential blockbuster fight between two domestic rivals is a blow to the British boxing scene, but Warren believes the bout could still happen even if he doubts Joshua could ever hope to beat Fury.

“I do believe the public buys into that fight even if AJ isn’t champion,” he said. “AJ’s said a lot of things since the fight [and] a lot of nonsense from ‘doctor’ [Eddie] Hearn about his eye.

“You got beat by the better man on the night and Joshua said that, to his credit.

“Joshua is a big fight. They keep talking about him still learning. He’s 32 years old. He’s an Olympic champion and world champion.

“Of course you can still learn every day, but at that level, at 32 years of age, with the experience you’ve got and the number of professional fights you’ve got, if you’re not absolutely world-class at that level then you’re never going to be.

“But having said that, if he did fight Tyson he would have a lot to prove and I do think the public would buy into it.”