Galahad v Martinez – all you need to know 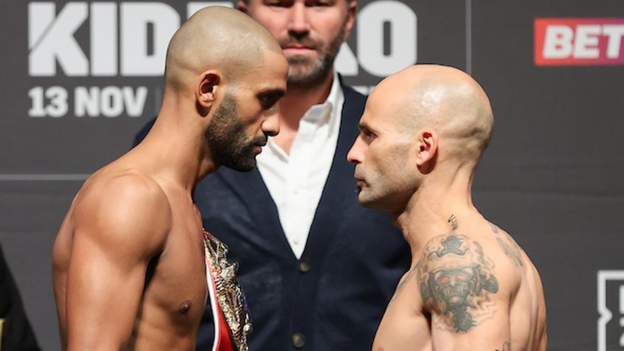 Kid Galahad defends his IBF world featherweight title against Kiko Martinez at the Utilita Arena in Sheffield on Saturday night.

Galahad’s homecoming was almost derailed when the Sheffield local was forced to weigh in twice having missed weight on Friday. There were no issues with the second weigh-in though with Galahad easily making the cut having been just 0.1lbs over the 126lbs limit.

With just one defeat to Josh Warrington on his 29-fight pro record, Galahad will have one eye on bigger fights next year after fulfilling his long-held dream of becoming a world champion last August.

Galahad, 31, though says he will not fall into the trap of overlooking a veteran like Spaniard Martinez.

“Forget those unification fights for now, it’s all about Kiko Martinez on Saturday night, going in there and doing a job on him,” he said.

“I’m not looking to just go in there and win. He’s had some bad decisions in the past against [Zelfa] Barrett and Warrington, so I know he’s going to come and not try leave it to the judges’ hands – that’s what I’m going to do.

“I’m going to go in there and seriously hurt him.”

Who is Kiko Martinez?

Martinez is a familiar face to many British fight fans. The Spaniard (42-10-2) has fought all across the UK including Belfast and Leeds. He has shared the ring with Warrington and Barrett in recent years and has losses on his record to Scott Quigg and Carl Frampton.

At 35 years old and with a mammoth 54 fights in to his pro career, Martinez’s best years are likely behind him. With 10 losses on his opponent’s, Galahad is a clear favourite despite the vast difference in experience between the two fighters.

Martinez, however, is convinced a shock is in store even though he has not beaten a British fighter since Frampton stopped him in their first fight in 2013. But the veteran has been buoyed by recent upsets in boxing, including Oleksandr Usyk’s stunning win over Anthony Joshua.

“First and foremost, it’s been two years of incredibly hard work, I haven’t had a day off in that time or any holiday – for my family or myself,” he said.

“There have been many surprises recently in boxing, look at some of the surprises, Joshua v Usyk, we have situations where champions aren’t respecting their defences and their rivals.

“If Galahad doesn’t do the same and respect this fight, he’s going to get a big shock on Saturday night.”

What happened at the weigh-in?

Crisis was averted at a dramatic weigh-in on Friday afternoon. Martinez was first on the scales and the challenger had no issues, weighing in at 125.4lbs (8st 13lbs 5oz).

Galahad was next to emerge and was relaxed until he saw the scales. He took off his hat, then his socks and eventually his underwear as he attempted to make the 126lbs limit.

It was no use for Galahad who was forced to weigh in again, but was able to hit his mark the second time round, weighing in at 125.5lbs (8st 13lbs 8oz).

Who else is fighting?

Not unlike the headliner, England’s Harper, 25, is angling for unification fights in 2022 and is eager to fight WBA belt holder Choi Hyun-mi and unified champion Mikaela Mayer.

“I know what I’ve got ahead of me on Saturday night, I’m not overlooking Alycia, but this is a stepping stone in my journey and career,” she said.

“I want to go on and push on to have a big 2022 and hopefully get a unification against Choi, push on for an undisputed against Mayer.”

While Harper may consider Baumgardner a “stepping stone”, her opponent cut a confident figure at the final press conference.

“It is a very dangerous fight for Terri, I pose a big threat, again just the experience I have with over 100 amateur fights and many former world champion’s training camps,” American Baumgardner, 27, said.

“I’ve been prepared for these moments, just to go out there Saturday night to really do what I do best and get the win – I will become a two-time world champion come Saturday night.

“Like I said, my confidence is at 100, there’s levels to this game and I believe I’ve been on that level, but I haven’t been given the opportunity to showcase that.”