‘I’ve trained like Rocky’ – Is Fury ready to fight Wilder? 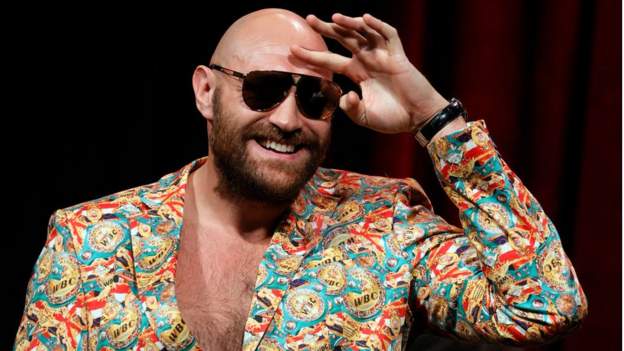 Tyson Fury believes Deontay Wilder is the most dangerous fighter in the heavyweight division and would beat any other rival, including Oleksandr Usyk and Anthony Joshua.

Facing a wounded Wilder is a dangerous task, even if it is not the fight WBC champion Fury or the fans were hoping for.

The Briton’s preparation, however, has been far from ideal.

The original summer fight date was scrapped when Fury contracted Covid-19 and was quickly rescheduled for October. Fury then had to rush home to the UK to be with his wife Paris when she went into labor with her sixth child with Fury, Athena, who spent several days in an intensive care unit.

To say it’s been a chaotic few months for Fury is an understatement.

With all that has happened, it is not hard to see why some might have questions about Fury’s readiness for this fight. And he cannot afford even a moment’s lapse of concentration against the Bronze Bomber.

“Wilder’s tailor-made to be his most dangerous and best opponent,” said Fury’s coach Sugarhill Steward – the man who masterminded the devastating performance against Wilder in the rematch 20 months ago.

So is Fury ready for an apparently rejuvenated and refocused Wilder?

Fury pokes fun at suggestions he is not prepared for Wilder, or that he is not fully fit.

“Am I 100%? I’m a million percent. Look at me, I’m in fantastic shape. I’m as fit as a fiddle,” Fury said. “I’m ready today, tomorrow, and forever. I’ll always be ready and I’ll never make excuses because that’s not me.”

Return to the UK

Fury had to undergo a lengthy quarantine on his return to the UK so he could be with Paris when she had baby Athena on 8 August.

The fighter released a heartfelt message when Athena had to spend time in intensive care.

“It’s a stressful time, babies and complications,” Fury said, but he downplayed the effect it might have on his preparations for Wilder.

“Camp is usual, I live a training camp lifestyle,” he said. “I’ve been training myself like in the Rocky movie. Like I said, what I don’t know about boxing ain’t worth knowing.”

Frank Warren linked up with Fury when he was at his home in Morecambe and offered a positive insight into the heavyweight’s mindset after such a stressful time.

“The only concern I had was when his daughter was in trouble,” Fury’s co-promoter said.

“It was quite awful times. With the baby, who cares about boxing? That takes over.

“When I saw him in person he was in a tremendous place. Physically there was a problem before where he would balloon up between fights – he’s fixed that problem. Mentally he’s now on the money. When he’s like that, he’s a dangerous guy in the ring.”

Fury did keep up his gym work during his time back in the UK, but his trainer Steward was only able to join him two weeks before he was due to return to the States.

It means Fury’s camp has been severely disrupted in the build-up. And neither Wilder or Fury has fought since their last meeting in February 2020.

Joshua’s promoter Eddie Hearn has suggested Fury is not “ready”, even questioning whether the Briton really had Covid-19 in July or was pulled out of the fight.

But Steward dismissed concerns about a haphazard camp.

“He was training every day before we started working together. We vibe great together. We always have fun, but I’m serious and so is he.”

“Tyson doesn’t leave anything to chance,” Warren said. “He’s so professional now, like Frank Bruno was back in the old days.”

Fury as the favourite

Fury’s best performances have come when he is unfancied.

No-one gave Fury a hope against then unified champion Wladimir Klitschko in 2015 and opinions were split on his chances against Wilder. But on Saturday Fury is the clear favourite.

Steve Egan – who trained Fury as an amateur – reckons Fury does have one flaw.

“[Tyson can be] too relaxed, too confident,” he said. “Thinking, ‘I’m strolling this’ and getting caught.

“He got caught by Steve Cunningham, a small guy. But speed is everything. Just switching off mentally for a minute – bang! It only takes one, doesn’t it?”

Steward, however, shrugged off any suggestion of complacency.

And while the doubters might be circling Fury once again, the fighter himself is not worried.

“There’s not one thing more that I could possibly do to prepare any better for any fight,” he said. “This is me. I’m at my peak. The best Tyson Fury is now.”