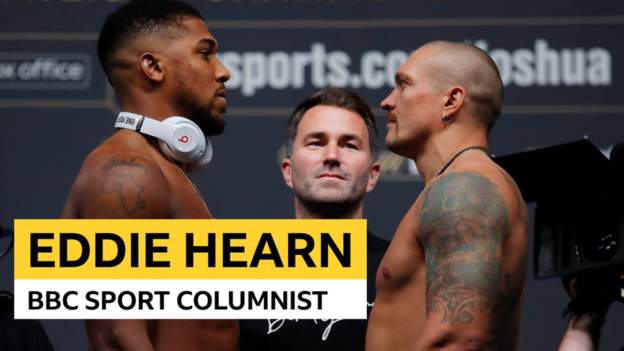 Eddie Hearn is Anthony Joshua’s promoter and talks to BBC Sport about Joshua’s defeat by Oleksandr Usyk and a potential rematch in 2022 as the Briton aims to regain the WBA, WBO, IBF, and IBO world heavyweight titles.

Matchroom Boxing’s next show includes the all-British super-welterweight contest between Liam Smith and Anthony Fowler. You can listen to that fight live on BBC Radio 5 Live Sports Extra at 22:00 BST on Saturday, 9 October.

Anthony Joshua is hurting like crazy at losing his world heavyweight belts to Oleksandr Usyk, but I have never seen him this hungry and more determined to win the rematch.

This definitely feels different from the Andy Ruiz defeat. That was one of the biggest upsets in heavyweight history, whereas this one the gameplan was wrong and he got beaten by one of the best pound-for-pound fighters in the world. There’s no shame in losing to Usyk.

I’ve seen many comments on how the tactics were wrong – and they were – but it’s difficult to not appreciate the things Usyk did. AJ was frustrated because he knows he can do so much better and boxed the wrong fight, but Usyk’s performance was exceptional.

But, going back to the Ruiz loss, that was different as it was just such a shock, nobody knew what to say. Here, you could see AJ’s mind working overtime on how he can beat Usyk. It was like the preparation for the rematch began then.

I saw [Tyson Fury’s co-promoter] Bob Arum saying AJ should step aside for Fury v Usyk but I couldn’t imagine that scenario happening in a million years.

We will formally announce the rematch in due course and start planning with K2 Promotions – March or April is sensible for the rematch.

Usyk has mentioned Kyiv in his home country Ukraine as a potential venue and we will look at all options. When AJ heard about that he didn’t have an issue with it and found it quite exciting.

I would like to do it back in the UK and we’ve had offers from the Middle East but we will see what’s the best opportunity for both fighters.

I don’t think the venue makes much difference in how AJ has to fight.

The Ruiz rematch challenge was mental. AJ was stunned at Madison Square Garden on his US debut in a sold-out arena by a guy we knew could fight but everyone else took the mickey out of and said he was out of shape, so that was tough for AJ.

People talk of whether this damages his legacy but if you look at his past 12 fights he should be remembered already as a great heavyweight champion.

All the great heavyweights have taken defeats – not one has got through without losing – and if you are going to constantly challenge the best you can lose.

His legacy is being a two-time world champion but also taking on all challenges. He has changed the sport in the UK, created some of the most iconic nights in British sporting and boxing history, inspired a new generation but also not swerved any challenge.

That legacy can become even greater if he wins the rematch and becomes a three-time world champion.

WBC champion Tyson Fury takes on Deontay Wilder this weekend in Las Vegas for their trilogy fight and I think Fury wins again – this time on points.

The Usyk-Joshua fight was always going to be closer than Wilder-Fury III. Fury is a huge favorite but Wilder has the ability to end a fight at any time. It’s heavyweight boxing and that’s why it’s so exciting.

‘The kind of fight that makes British boxing great’

Before then, on Saturday night, we have a really good domestic fight as Liam Smith takes on Anthony Fowler in a brilliant super-welterweight contest (with live commentary on BBC Radio 5 Live Sports Extra from 22:00 BST).

It’s exactly the kind of fight that makes British boxing great. Big domestic fights are always appealing, but two Scousers going at it in Liverpool is always a special night, especially in front of 10,000 people.

It’s a crossroads fight. Liam Smith, a former world champion, has boxed Saul ‘Canelo’ Alvarez and is still a prominent world fighter, against Anthony Fowler, a tremendous amateur who is on the way to world level as a professional.

Fowler loves to get stuck in and have a tear-up, as does Smith. Smith looks to fight at close quarters but Fowler is very dangerous on the inside at close quarters. I think the fight will go very deep – it will be tremendous and shows the strength of British boxing.