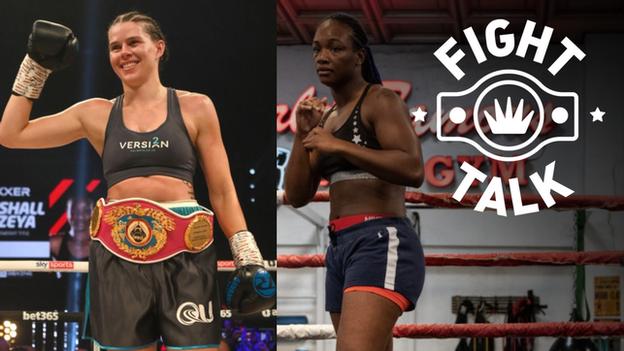 Who wins in a super-fight between Claressa Shields and Savannah Marshall? Could Anthony Joshua be about to change trainers? And Lawrence Okolie welcomes a unification fight in Latvia. Fight Talk brings you your weekly fix of boxing news.

In 2022, we may have another blockbuster bout to add to the list.

A super-fight between American Claressa Shields and Hartlepool’s Savannah Marshall moved a step closer on Saturday night after the Briton demolished Lolita Muzeya in Newcastle to retain her WBO middleweight title.

Boxing fans, fighters, and trainers applauded yet another clinical performance from Marshall…

Shields and Marshall will both fight on the same card in Birmingham on 11 December and if they both come through with wins as expected, they will face each other next year.

All of the middleweight belts will be on the line in a match-up that has been almost 10 years in the making.

Shields is a double Olympic gold medallist, has won world titles in three weight classes, and is the only boxer – male or female – to be the undisputed champion in two divisions.

The self-proclaimed ‘Greatest Woman of All Time’ is far from modest, either.

But Shields does have one blemish on her record; in 77 amateur fights, her only loss came against Marshall in the World Amateur Boxing Championships in 2012.

Since turning professional, Shields in undefeated in 11 professional fights – two wins have come via knockout, but the classy boxer has rarely been troubled.

Marshall, meanwhile, has had the same number of pro bouts but has stopped nine of her opponents inside the distance.

The verbal jousting between the pair has been going on for some time, and Shields had another pop at her rival this weekend…

Marshall is not one to shy away from the confrontation – in her post-fight interview, she said: “Claressa couldn’t last two minutes, never mind two rounds.”

So who will win when or if we see Shields-Marshall? Some fans think Marshall’s power will be too much, while others feel Shields’ skills are far superior… 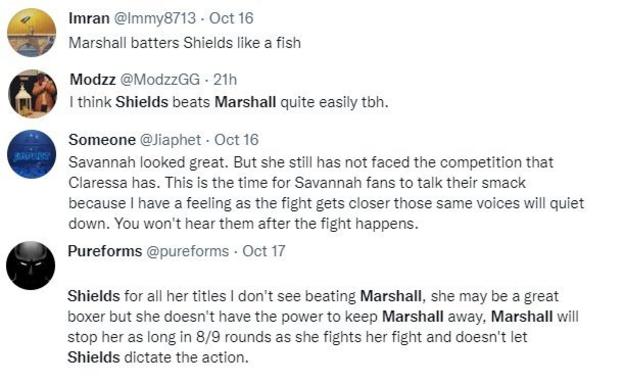 Before all of that, however, Shields will swap disciplines for her second mixed martial arts bout on 27 October, having won her Professional Fighters League debut against Brittney Elkin in June.

Boxing fans will be hoping she comes through unscathed, and that we can move another step closer towards arguably the biggest women’s bout of all time.

Could Joshua link up with a new trainer?

Rumors have been circulating this week that former unified heavyweight champion Anthony Joshua could be about to change trainers.

The Londoner lost his WBO, WBA, and IBF belts to Oleksandr Usyk at the Tottenham Hotspur Stadium last month.

Joshua has evoked a rematch clause and is set to face Usyk again in 2022, but his below-par performance against the Ukrainian has led to questioning marks surrounding his training team, led by head coach Rob McCracken.

Even rival Tyson Fury has said he would help train Joshua in the rematch.

While the chances of Fury taking on the role of Joshua’s cornerman are slim to none, ‘AJ’ has been in the company of two different coaches in the USA this past week.

First, he was pictured at Virgil Hunter’s gym in Hayward, California, where he was with visiting fellow Briton Joshua Buatsi.

In a clip circulating on social media, Joshua was seen laughing alongside Alvarez as the Mexican taught him a few words in Spanish.

Joshua turned 32 on Friday and his American trip may well just have been a birthday getaway, but promoter Eddie Hearn did not rule out any changes in the coaching set-up.

“AJ will always look at his preparation and see how he can improve,” Hearn told Boxing Social.

“If that’s changing things up, looking at bringing people in, or whatever he’s got to do, he will do that.”

Britain’s WBO cruiserweight champion Lawrence Okolie is reaching the peak of his powers, having won the world title against Dilan Prasovic in London last month.

But beating a champion in their own backyard is a feat that can elevate a fighter, and Okolie is eyeing greatness.

The Hackney-born fighter accepted the invitation…