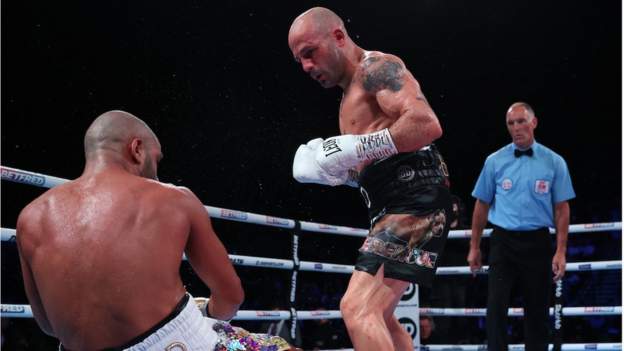 Kid Galahad suffered a devastating defeat in his maiden defence of the IBF world featherweight title, losing to a brutal knockout in the sixth round by Spaniard Kiko Martinez.

Galahad, 31, fighting in his home city at the Utilita Arena in Sheffield, was in control in the first four rounds.

But 35-year-old Martinez floored Galahad with a strong right hand with seconds to go in the fifth.

The fight was then ended after just six seconds of the sixth.

Promoter Eddie Hearn said he would now look at the possibility of a rematch.

“I can’t believe what I’ve just seen,” he said.

“It was the most stunning thing I’ve ever seen in a boxing ring. It was such a one-sided fight. It was beat-down, a masterclass.

“One punch changes everything. Kiko Martinez has been fighting at the top for 15 years. I knew he would not stop trying. He was completely outclassed by Galahad.

“Wow. That was a brutal right-hand finish.”

It was 25-year-old Harper’s first career defeat as she was caught with a strong right hand before the fight was stopped.

Baumgardner, 27, dominated the bout from the start, showcasing her power.

“I’ve dreamed of this moment,” she said. “I told myself I’d become a world champion. I came over here as the challenger but my confidence was 100%.

Promoter Hearn added: “It was a big defeat. Well done to Alycia. She made a statement tonight. Massive respect. Terri will be back, we’re very proud of her, but tonight is all about Alycia Baumgardner.”

Taylor to face Sharipova in Liverpool