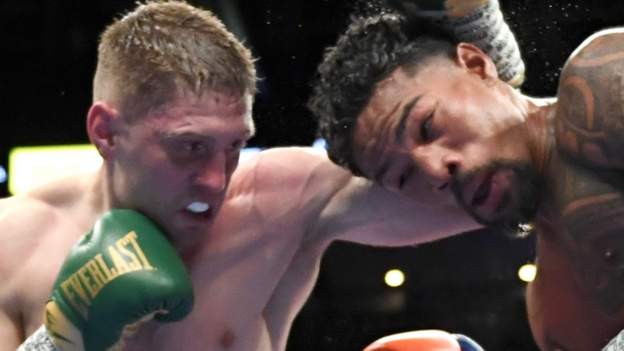 After a damaging defeat by Tureano Johnson in 2019, Quigley put himself back in world title contention by beating Shane Mosley Jr in May.

Since then Quigley, 30, has been linked with a possible bout with the highly-regarded WBO champion Andrade, 33.

The American has been frustrated in his hopes to earn a unification title bout.

“I’ve worked my whole career to get into this position of becoming world champion,” said Donegal’s Quigley. “Demetrius is a great champion but now it’s my time and that world title is coming back to Ireland.

“I just wanted to get this announcement out so I can finally tell everyone ‘yes, it’s happening’. I’m absolutely delighted and buzzing. I’m really excited for this fight.”

Andrade, who has held the WBO middleweight belt since 2018, has won all 30 of his professional fights with his 18 knockouts including a dominant win over Ireland’s Luke Keeler last year.

Since landing the WBO middleweight belt, Andrade has made four successful title defenders including his stoppage win over Ireland’s Keeler and points victory over Welshman Liam Williams earlier this year.

Quigley moved back into the world title frame thanks to his narrow points victory over Mosley Jr in Las Vegas five months ago.

Ireland’s former world champion Andy Lee is Quigley’s trainer although he missed the May bout because of travel restrictions which saw another former Irish boxing great Wayne McCullough instead fulfilling cornerman duties for the Donegal fighter.

Quigley, a 2013 world amateur silver medallist, won his opening 16 professional bouts before his shock defeat by Johnson in July 2019.

After then linking up with trainer Lee, he won two low-key bouts prior to his crucial win over Mosley Jr.

Quigley turned professional in 2014 after an outstanding amateur career which included his World Championship silver and a European gold medal in 2013.