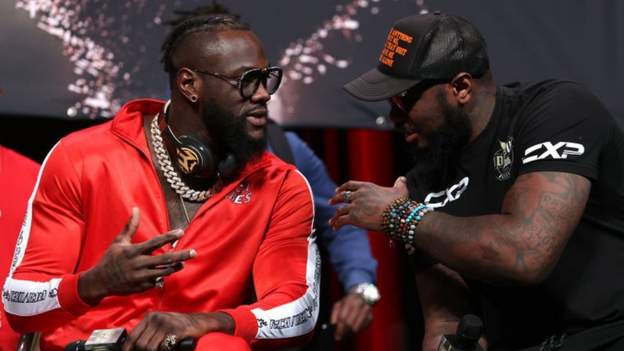 Deontay Wilder is in the new territory before his third meeting with Tyson Fury – the first time as a professional he is coming in on the back of a loss.

Wilder had not been beaten in 43 bouts before he lost his WBC heavyweight title to Fury in February 2020.

The 35-year-old American has changed his team and trainer Mark Breland, who angered Wilder by throwing in the towel to end that fight, is out.

He has been replaced by Malik Scott, a fighter Wilder knocked out in 2014.

“It’s something I should have done a long time ago,” Wilder said on the Premier Boxing Champions Podcast last month.

“It’s a family team now and I’ve got all the guys that love me deeply as I love them.”

Breland, 58, won Olympic and World Championship gold medals as an amateur and then became the WBA world welterweight champion.

During their 12-year partnership, Wilder won the world title in 2015 and made 10 successful defenses before the second fight with Fury.

The Briton had floored Wilder in the third and fifth rounds and had his opponent pinned in the corner in the seventh when the towel came in to hand Wilder his first loss.

A public falling-out between fighter and trainer followed with Wilder accusing Breland of malpractice and Breland responding by saying Wilder was “untrainable”.

Even this week, Wilder said he lost “because of a weak individual in my team”.

But at a heated news conference on Wednesday, Fury told Wilder that Breland “had saved your life, saved your career, and needed a pay rise, not being sacked”.

Fury, who once sparred with Scott and damaged his eardrum, added: “You [Wilder] are a loser and are being trained by a loser, that makes two losers.”

From opponent to trainer

Scott, 40, gained 38 wins from 42 bouts but never fought for a world title and suffered three defeats, including one against Britain’s Derek Chisora in 2013 and 96-second destruction at the hands of Wilder in 2014 before retiring two years later.

Fury has labeled Wilder “a one-trick pony, with one-punch power”, but Scott believes he can help his countryman regain his title in Las Vegas over the weekend by sharpening underused areas of his game.

“I am a student of the game, Deontay ruled the division and was using one weapon but sometimes two or three,” said Scott.

“I’ve watched him in the gym for 10 years, sparring guys from different walks of life stylistically, and watched him be creative but when he gets in the fight he’ll use just one or two tools.

“He got content using one weapon to knock people out – I went into his toolbox and made sure we drilled it over and over again.

“I don’t have him doing choreographed pad work, ducking down to the ground – he is fighting a tall guy. I don’t want my fighter catching punches, I want him to slip punches, parry punches.

“He’s more dynamic, more open-minded and this is the best Deontay Wilder people are going to see.”

While the two fighters exchanged insults on Wednesday, there was mutual respect between the two main coaches, with Scott calling Fury’s trainer SugarHill Steward “a great brain”.

Steward responded: “I’m excited to see what Deontay and Malik have been working on – my man Malik, I’ve known him a while.

“Wilder has changed the way he fights. I’ve seen clips training, and he’s done things differently which tells me he’s changed. I know most people say he’ll go back to the same thing but I don’t think it’s true.”

“Breland was a proven trainer and took Wilder to the WBC title,” Price said. “You don’t know whether they’re trying to do something different, think outside the box.

“You can never judge a trainer by how good a fighter he was. Most trainers couldn’t cut the mustard as a fighter.

“Scott is completely untested as a trainer, so it’s very experimental. I don’t know if he’s ever worked a corner before.

“But if they’ve gelled on a personal and boxing level, you’ve got to respect it and see how it plays out.”

Fury’s co-promoter Frank Warren felt Wilder would still be unsuccessful, despite the changes made.

“Wilder has a new trainer and he’s saying all the right things, but what else can Scott say?” said Warren.

“Wilder came up with a thousand excuses why he lost but he got beat by the far superior guy.

“All Wilder can do is go out there and try and knock Tyson out. Wilder’s a big puncher, but what else can he do?”