David Price and Dillian Whyte believe Deontay Wilder’s ego might prevent him from making the necessary changes to beat Tyson Fury in their trilogy fight.

They meet in Las Vegas this weekend with Fury, 33, making the first defence of his WBC world heavyweight title. 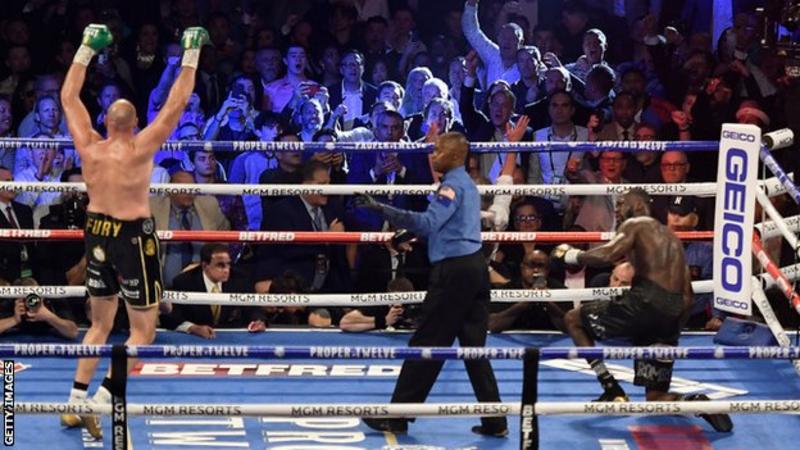 Wilder, 35, suffered a technical knockout defeat by the Briton 20 months ago, after their first fight was drawn.

The American made a string of bizarre excuses for the loss and Price said it was “a dangerous game to play”.

Wilder, who was beaten for the first time in his professional career, claimed Fury “cheated” by tampering with his gloves and that his own ring-walk outfit was too heavy and drained him of his energy.

Price, a former heavyweight himself, says Wilder’s excuses are baffling, but said he did not think he was trying to play mind games.

“I don’t think it’s an act because he’s been doing it since the second fight,” he said on the BBC Radio 5 Live Boxing podcast.

“It’s gone on too long to be an act. He really believes in himself.

“Sometimes people lie to themselves so much they end up believing it. It’s a bit of confirmation bias where you tell yourself things to make you believe it. That’s where he’s at.

“Instead of admitting to his mistakes and shortcomings, and trying to improve on what went wrong, he’s not wrong. It’s a bit narcissistic to think like that.”

Whyte, who hopes to fight for the WBC title next, echoed Price’s thoughts, saying it was hard to tell exactly where Wilder was mentally.

“It’s a really interesting one this time because we don’t know where Wilder’s at or Fury’s at,” he said.

“You’ve give the edge to Fury, but a lot of things have happened in the middle, like personal things.

“Wilder, we don’t know if he’s recovered at all because he went on this crazy run of blaming stuff. He was acting crazy.

“We don’t know where they’re at fully. The smart money would pick Fury to win again, but something inside of me is saying Wilder might spring a surprise on us.”

Wilder sacked his coach Mark Breland after the second Fury fight. Breland was the man to throw in the towel for Wilder in the seventh round and the former WBC champion was fuming with his trainer after the bout.

Former heavyweight turned trainer Malik Scott has been promoted within Wilder’s team to take over from Breland and has been vocal about the changes made since the defeat.

Wilder knocked out Scott in 96 seconds in 2014 when he was still fighting and Price admitted it was strange to see Scott take charge as a leading coach.

“Mark Breland was a proven trainer, took him all the way to the WBC title,” he said.

“You don’t know whether they’re trying to do something a little bit different, think outside the box.

“You can never judge a trainer by how good a fighter he was. Most trainers couldn’t cut the mustard as a fighter.

“Malik Scott is completely untested as a trainer, so it’s very experimental what they’re doing. I don’t know if he’s ever worked a corner before.

“But if they’ve gelled on a personal level and a boxing level, then you’ve got to respect it and see how it plays out.”

‘Fury coming into his prime’

While Whyte thinks Wilder is capable of springing a surprise, Price is confident Fury will see out the trilogy with another devastating performance.

“Wilder has got the power to knock Fury out,” Price said.

“That’s always going to be there. But Fury is not the type of fighter who will make the same mistake twice. His tactics in the second fight were perfect. He fought fire with fire.

“I think Fury is coming to his prime, he’s going to be at his peak, so I think similar tactics to last time.

“He’s just got to look out for that right hand, with someone who has reflexes like Fury, as long as he stays switched on, he can win the fight hands down again.”