Anthony Davis has 34 points to lead Lakers past the Spurs 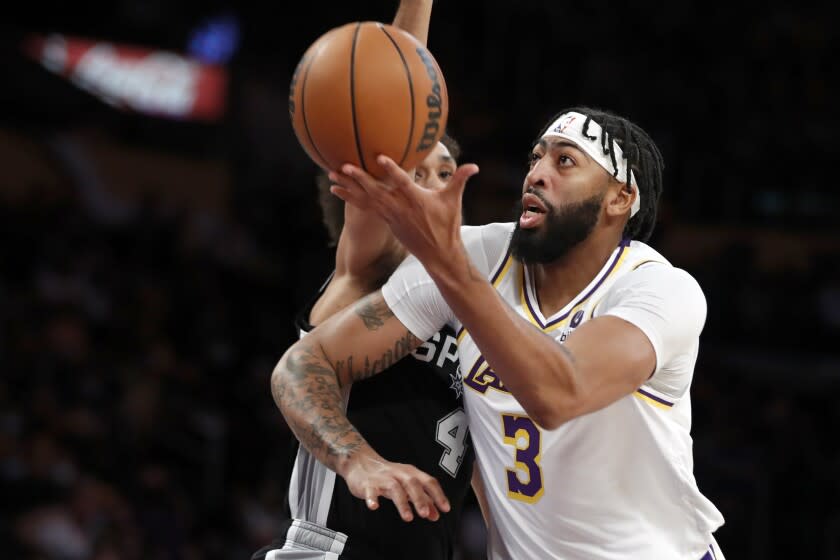 The Lakers are starting to become whole again, day by day and game by game.

LeBron James is not back yet, but the Lakers forward is making progress with his abdominal strain that kept him out of his sixth straight game on Sunday afternoon.

But Talen Horton-Tucker was back for the Lakers, his first game of the season after having right thumb surgery.

One of the Lakers constants with the first group has been Anthony Davis, who produced 34 points, 15 rebounds and six assists to lead the Lakers to a 114-106 win over the San Antonio Spurs at Staples Center.

Horton-Tucker had 17 points in his return that included a driving layup to push the Lakers’ lead from two points to 107-103.

Anthony had 15 points, which included a three-pointer off a pass from Davis with 1 minutes 46 seconds left to push the Lakers’ lead to 110-103 following a late Spurs rally.

Russell Westbrook was just shy of a triple-double with 14 points that included a layup off pass from Davis that pushed the Lakers’ lead to 112-103 with 1:18 left. Westbrook also had 11 rebounds and seven assists.

Update: The Lakers complete a five-game homestand in a back-to-back game for both teams. The Bulls played Sunday night against the Clippers. Former Laker and fan favorite Alex Caruso leads the Bulls in steals (2.5) and is averaging 8.2 points per game. Chicago has four players averaging double figures, led by Zach LaVine (25.7) and DeMar DeRozan (25.3), but will be without two-time All-Star center Nikola Vucevic (health protocols), who is averaging 13.6 points, 10.9 rebounds and 4.3 assists.