DeRozan on offseason: “I felt like going to the Lakers was a done deal” 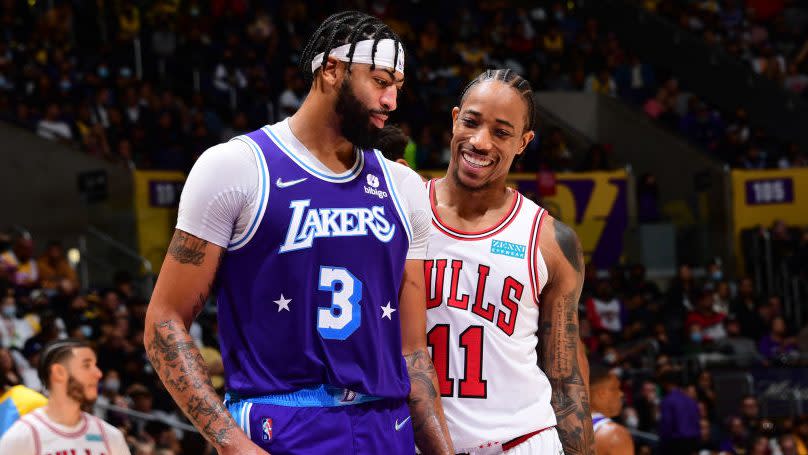 We already knew DeMar DeRozan and LeBron James talked seriously this summer about trying to join forces. DeRozan was one of the top free agents on the market and LeBron wanted another star on the roster.

What we didn’t realize was how close the deal was to getting done, at least in DeRozan’s mind. Here is what Chicago’s leading scorer told Chris Haynes of Yahoo Sports.

“I felt like going to the Lakers was a done deal and that we were going to figure it out. I was going to come home,” DeRozan told Yahoo Sports… “The business side of things just didn’t work out. A couple of things didn’t align. It didn’t work out. It’s just part of the business, part of the game. My next option was definitely Chicago. So, looking back at it, it worked out well.”

What transpired motivated DeRozan, who walked out and scored 38 on the team that didn’t want him and led the Bulls to an easy win. He scored 35 the night before against the Clippers. Playing back at home in front of family and friends clearly motivates DeRozan.

He also showed Monday night his ability to create and score in the halfcourt, something the Lakers lack beyond LeBron James (who remains out with an abdominal injury but could return Friday). In that sense, DeRozan would have been a good fit with the Lakers, as would his improved 3-point shooting (37.1% this season on 2.5 attempts a game).

What likely didn’t work out is the Lakers jumped at the chance to get Westbrook, and when they did there was no cap space to bring in DeRozan as a free agent (or young players left on the roster to make a sign-and-trade with the Spurs work). Even if the Westbrook trade hadn’t come along, the Lakers were much closer to a trade for Buddy Hield in Sacramento than DeRozan.

Laker GM Rob Pelinka had a lot of irons in the fire — in addition to talking to DeRozan (and the Spurs, it would have to have been a sign-and-trade), the Lakers were closing in on a trade for Buddy Hield in Sacramento, a league deal said appeared close to being done. Then Russell Westbrook became available and the Lakers jumped in with both feet to make that trade happen. After that, there were not enough players on the roster to make a trade for DeRozan or Hield, the Lakers were locked in.

DeRozan signed a three-year, $85 million deal with the Bulls, part of a remaking of that roster that has gotten off to a fast start in the East. As DeRozan said, that has worked out well for him and the Bulls.

However, if the Lakers had signed DeRozan to that same contract, which pays him $27 million as opposed to Westbrook’s $44 million, could the Lakers have re-signed Alex Caruso or kept someone like Kyle Kuzma?

It would be interesting to get a glimpse into that other timeline where DeRozan is a Laker and see how that team looks.

Three things to know: “Washed” DeRozan and Bulls sweep through… Watch Anthony Davis get ejected while tying his shoe LeBron James reportedly to return “soon,” still has not done…

DeRozan on offseason: “I felt like going to the Lakers was a done deal” originally appeared on NBCSports.com