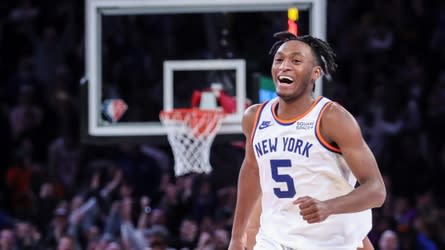 Immanuel Quickley had two key three-pointers midway through the fourth quarter to help the Knicks in a come-from-behind win against Indiana on Monday.

But Tom Thibodeau was just as impressed by Quickley’s play on the other end of the court.

“He’s a very underrated defender. He’s a fierce competitor, which I think really helps him,” Thibodeau said after Quickley’s big night against Indiana. “Sometimes we have to reel him in a little bit with his gambles, but he’s underrated.”

Quickley gave New York defense, rebounding and scoring when the club needed it most on Monday. He had five rebounds (two offensive) in the quarter and the Knicks outscored Indiana by 13 while he was on the court. They also limited the Pacers to 2-for-20 shooting in the final period.

The Knicks closed the game with Quickley, Derrick Rose, RJ Barrett, Julius Randle and Taj Gibson on the floor. That group outscored Indiana 9-2 in the final 4:33.

Credit Thibodeau for finding the right lineups throughout the fourth quarter. He subbed in Obi Toppin and Alec Burks during the period as Thibodeau tried to find the optimal combination of bench players and starters in the second half.

Thibodeau credited Randle for distributing the ball against Indy and playing with energy.

Randle took just one shot in the fourth quarter but he had two assists, four rebounds and several solid sequences on defense.

“I feel like he let the game come to him,” Gibson said.

“The willingness to make plays and spray the ball out and get the ball moving side to side, that was huge for us,” Thibodeau said.

Randle didn’t shoot the ball well against Indiana. He and his teammates still seem to be getting comfortable with one another. Last year, the offense ran primarily through Randle. This season, Kemba Walker and Evan Fournier are also making plays with the ball.

So it’s been a period of adjustment for the Knicks starters. On Monday, just like they have so often early this season, the Knick reserves came in and took control of the game.

A few other notes from the game:

Thibodeau was asked before the game about Toppin’s playing time. Some see the way Toppin has impacted the game – looking at his plus-minus numbers in particular – and have concluded that the second-year forward should play more often.

“It’s all based on performance. It’s not an individual thing. It’s a team thing. It’s how the team is functioning and there has to be a balance to offense and defense. That factors into it as well,” Thibodeau said.

When asked where Toppin is defensively, Thibodeau said Toppin has “done a good job. He’s getting better. The rebounding is still something that he’s locked into a lot better. So he’s improved in that area as well. He’s gotten a lot better in terms of understanding schemes so just keep working at it.”

Toppin had four points and four rebounds on Monday; he played six minutes in the decisive fourth quarter.

Mitchell Robinson left the game with a left ankle injury. Robinson has suffered several injuries since he returned to the lineup late in the preseason.

After being off the court for seven months, Robinson is understandably still working on his conditioning.

With Robinson limited and Nerlens Noel out due to injury, health has been an issue for New York at the center position.

Here’s what Thibodeau said when he was asked about Robinson playing with the muscle that he added in the offseason.

“He’s a lot stronger. He’s added a lot of muscle. And then I think he’s dropped some weight, too. He’s on his way down now. He’ll find an ideal weight,” Thibodeau said. “We monitor that pretty closely. As he’s allowed to do more running and conditioning I think that’ll improve as we go.”

Robinson is set to be an unrestricted free agent in the offseason.