Knicks’ Mitchell Robinson says his ankle is ‘a little sore’, and hopes to solve sneaker issues 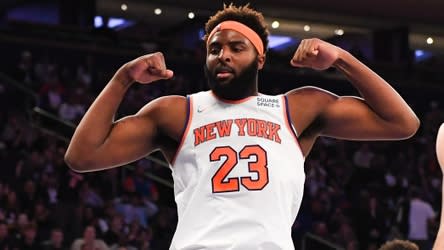 Knicks big man Mitchell Robinson has struggled to stay healthy in his career, a trend that has continued this season as he’s currently dealing with an ankle injury.

The 23-year-old played just 15 minutes against the Indiana Pacers on Monday night before exiting due to his ankle. He spoke to reporters at practice on Tuesday to discuss what he’s calling a sore ankle.

“It was just a little sore,” Robinson said. “I just practiced, you know what I’m saying, I can still feel that it’s sore but it ain’t to the point I can’t play.”

Robinson mentioned that he first hurt his ankle against the Charlotte Hornets on Nov. 12, but was able to return to that game and play. He added that he’s tried out multiple sneakers to fix the issue.

“Yeah I got it taped up after it happened in Charlotte,” Robinson said. “Tried on like three different pairs of shoes, trying to figure this thing out man.

“It happened in the first quarter, but when I got subbed out and kind of relaxed a little bit, that’s when I started to feel it. Trying to keep it warm, you know what I’m saying, it was kind of hard [to move around] but it wasn’t that bad.”

Robinson went on to explain the sneaker problems, as he’s recently transitioned from wearing low-tops to wearing high-tops.

“The first problem was the shoe kept busting,” Robinson said. “Like that was the biggest thing, the shoes kept busting, I don’t know why, I don’t know how, just bust. And then so like I go to a different shoe, next thing you know I get a little tweak here and there, it’s tough.

“I’m still trying to figure it out, what can I do. I’m with the high-tops now. Yesterday my shoe string popped, I don’t know how, popped. We just gotta figure it out.”

The 7-foot, 240 pound center told reporters which sneakers were bothering him, and jokingly said he may need to wear a pair of boots to solve the problem. Robinson also mentioned that he has been wearing special orthotics in his shoes since having foot surgery last season.

“Quite a few, I had the PG’s, retired those,” Robinson said. “The KD’s had my toe, it was my toe really, got stepped on, had to throw those. Then I went to the Kyrie’s, the high top ones. I even went bigger on them, I went to a 16, I wear a 14. Still didn’t work out, I think now it’s about to be some Timbs or something, some Timberland boots, for real.