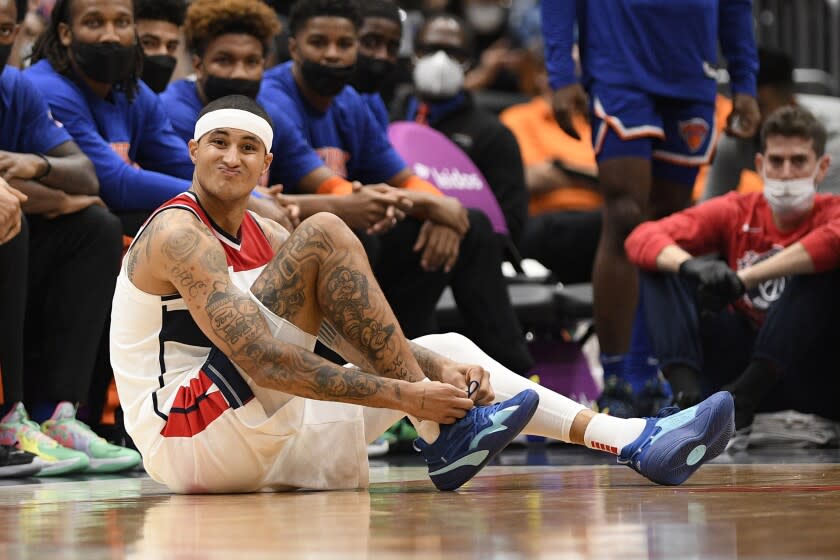 Kyle Kuzma played with LeBron James (and Anthony Davis and many others) on the Lakers team that won the 2020 NBA championship.

For some reason, folks in Cleveland are trying to use this information to get inside the head of the now-Washington Wizards star.

It doesn’t seem to be working.

It’s also a classic example of the pot calling the kettle black, as Kuzma has been quick to point out.

On Monday morning, the NBA on ESPN Twitter account tweeted a screenshot from a Cleveland news station’s broadcast of Kuzma talking to reporters following the Wizards’ 97-94 win over the Cavaliers last week. Instead of identifying Kuzma as a “Washington Wizards forward” or something of that nature, someone at the station put the words “Won an NBA championship thanks to LeBron James” under his name.

Kuzma tweeted out a good-natured response soon after.

“City of Cleveland we have something in common,” Kuzma tweeted, “nice too meet you.”

James, an Akron, Ohio, native, spent his first seven NBA seasons with the Cavaliers before signing with the Miami Heat, where he won two NBA titles in four seasons. He then returned to Cleveland and led the Cavaliers to their only league championship in 2016. James averaged 26.3 points a game during the playoffs, including back-to-back 41-point games in Games 5 and 6 of the NBA Finals against the Golden State Warriors.

Yet some people in Cleveland seem to forget about all of that when it comes to heckling Kuzma. During last week’s game at RocketMortgage Fieldhouse, Kuzma got into a back-and-forth conversation with some Cavs fans holding a sign that read, “Without LeBron, Kuzma wouldn’t have a ring.”

At one point, Kuzma reportedly told them, “Cleveland wouldn’t be s— without LeBron.” He did eventually autograph the sign, but not before nailing a pair of three-pointers in the final 30 seconds to help the Wizards erase a four-point deficit to claim the win.

Kuzma later credited those hecklers with motivating him to make the clutch shots at the end of the game. “It was their fault really,” he said.