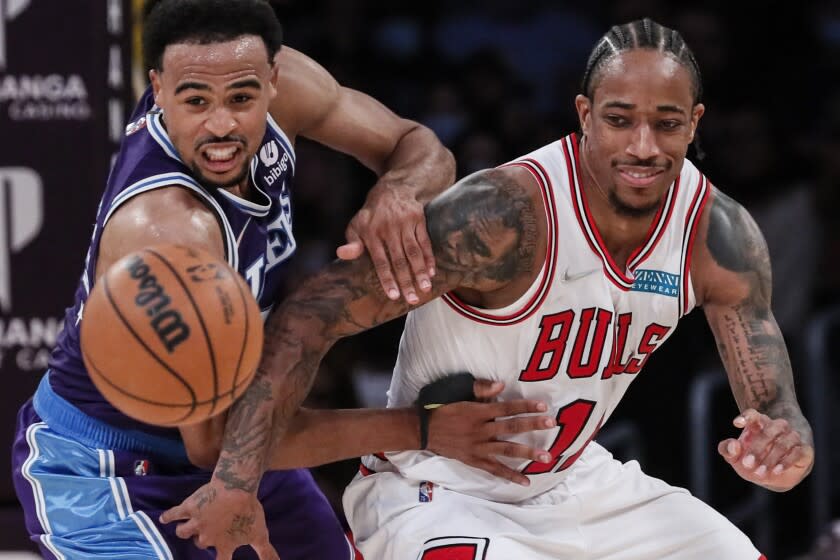 The Lakers were supposed to be in for an easy start to the season with 12 of their first 15 games at Staples Center. Yet the team, still without LeBron James, is barely above .500 after a 121-103 loss to the Chicago Bulls on Monday night dropped them to 8-7.

The Lakers went 3-2 in their latest homestand, suffering two blowout losses and mustering three tight wins. Now they have a five-game road trip starting Wednesday at Milwaukee with James’ status with an abdominal injury still in question.

Here are four takeaways from the latest Lakers loss:

When the Lakers drafted Lonzo Ball second overall in 2017, the former UCLA star was lauded for his court vision but critiqued for his unorthodox and inconsistent three-point shooting. Back at Staples Center with his third NBA team, Ball showed his former team what it’s missing.

He sank seven of 10 three-pointers, matching his season high, as the Bulls (10-4) made 15 of 34 shots from beyond the arc. Ball finished with 27 points, eight assists and seven rebounds.

In their last three games, the Lakers allowed opponents to shoot 40.2% from three, losing to the Minnesota Timberwolves and Bulls in blowout fashion while beating the San Antonio Spurs 114-106.

As opponents are heating up, the Lakers are cooling down. They’ve set season lows from beyond the arc in two of the last three games, shooting 22% from three-point range against Minnesota and 18.8% (six for 32) against the Bulls. Russell Westbrook and Carmelo Anthony missed all 10 of their combined three-point tries Monday.

“We can talk about a lot of other things that went on tonight, but when you shoot six for 32 from three, you’re not going to beat anybody unless you’re just on it, you’re on point with every other aspect of the game,” said Anthony, who had nine points. “And that’s not how the night went for us. There’s no excuses for that.”

Bad to worse for Anthony Davis

The Bulls surprised the Lakers with a swarming defense against Anthony Davis that coach Frank Vogel said the team hadn’t faced yet this season. According to ESPN Stats and Information, Davis drew 15 double teams, the most of any game as a Laker, and was held to six-for-nine shooting from the field for 20 points.

Davis took just two shots in the first quarter as the Lakers struggled to adjust to the Bulls’ aggressive defensive style, a byproduct of the newly constructed team that is still trying to come together 15 games into the season.

“We turned the ball over too much and had too many bad possessions early on trying to get AD involved,” Vogel said. “Part of an 82-game season with a new group is all these guys are new to playing with Anthony and trying to figure that out and understanding what we want to go to when we see defenses like that.”

The slow start turned into an early exit for Davis, who was ejected with 2 minutes 2 seconds left in the third quarter for arguing with a referee. The Bulls were allowed to inbound the ball despite the fact Davis was still trying to lace up his sneaker after contesting a shot. When he objected, Davis was given his second technical foul of the game.

Talen Horton-Tucker provided two of the brightest Lakers highlights of the night with thunderous second-half dunks, but when he slammed the ball through the rim in the fourth quarter, a large portion of the sellout crowd was gone.

The guard playing in his second game of the season had a career-high 28 points with six rebounds and two assists. He played 37 minutes in the second of back-to-back games since he returned from a right thumb injury.

The ones who got away

Former Lakers guard Alex Caruso received a loud ovation from fans when he was announced as a starter before Monday’s game, but he had a quiet performance in his return to Staples Center. He was scoreless, missing his one field-goal attempt, but had six rebounds and five assists.

The Bulls didn’t need Caruso’s scoring because they had more than enough from Compton native DeMar DeRozan, who poured in 38 points on 15-for-23 shooting. The former USC star was a potential free-agent target for the Lakers this past summer, but financial constraints ended the homecoming opportunity.