Lakers no match for DeMar DeRozan, Lonzo Ball and the Bulls 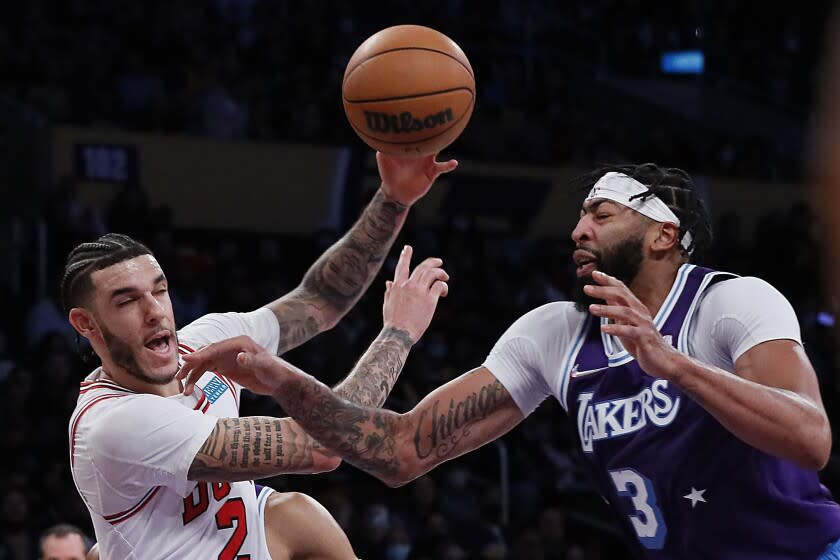 The buzz left the building completely in the third quarter, returning only when Anthony Davis was ejected from the game with two minutes 20 seconds left in the third and increasing when the Lakers cut a 25-point deficit to 15 in the fourth quarter.

They had seen this act before, the Lakers getting drilled in the third quarter, unable to match the energy and effort of yet another opponent.

This time, the Lakers couldn’t keep up with the faster and younger Chicago Bulls after the intermission, getting run off the Staples Center court during a 121-103 defeat before 18,997 fans at Staples Center on Monday night.

Lonzo Ball, the former Laker who played at Chino High and UCLA, put a stop to whatever thoughts the Lakers had at attempting a comeback.

He completed his night with 27 points, making seven-of-10 three-pointers and 10 of 13 overall. He had 13 points in the fourth quarter, going to work after the Lakers had pulled to within 68-53 on a Talen Horton-Tucker dunk.

Ball scored on a drive and a three-pointer, putting the Lakers back in a hole in which they never were able to climb out of the rest of the way.

They actually trailed by 28 points in the fourth, never finding a way to slow down the Bulls, who shot 55.1% from the field and 45.5% from three-point range.

Horton-Tucker had career-high 28 points and six rebounds in his second start of the season.

But with Davis totaling 20 points and six rebounds before he was ejected, the Lakers were not even close to making this a game.

“We’ve been struggling,” Lakers coach Frank Vogel said. “A little bit up and down. We’re fighting for consistency. A change of environment should be good for us.”

DeMar DeRozan, who starred at Compton High and USC, dropped 38 points on 15-for-23 shooting.

The Lakers, meanwhile, made just 18.8% of their three-pointers, going six-for-32.

“Zach’s been really hot so we were trying to take the ball out of his hands. Lonzo gets going on the backside,” Vogel said. “We tried to double team DeRozan early because of what Lonzo and Zach look like on the backside. … They are an extremely difficult team to guard. They put a lot of pressure on you, and give them credit for shooting the heck out of the ball.”

Russell Westbrook started strong for the Lakers. While he finished the game with 25 points on eight-for-19 shooting, he missed all six of his three-pointers.

The Lakers went 3-2 on their five-game homestand, not quite what they were looking for in what many thought was an easy season-opening schedule with 11 of their 14 games at Staples Center.