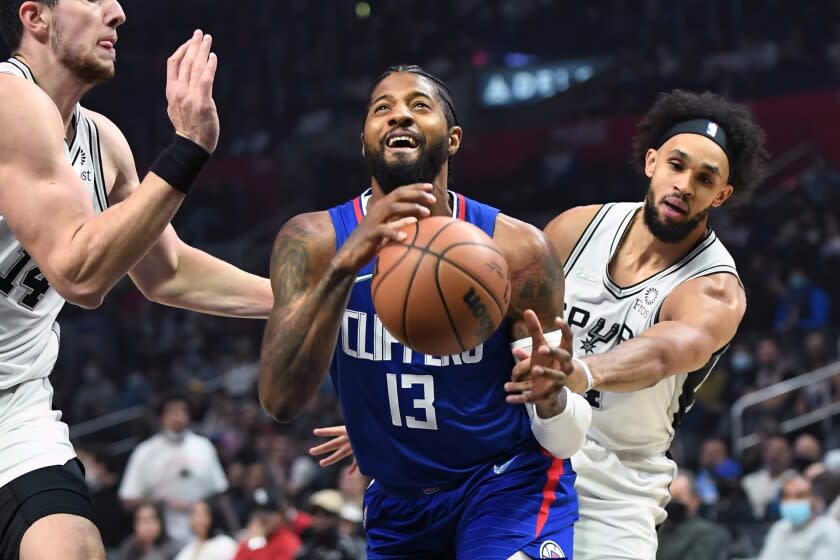 In a rarity, the Clippers’ biggest problem Tuesday wasn’t falling behind by double digits.

It was holding onto a lead of that size in an eventual 106-92 win over the San Antonio Spurs.

Up 12 points in the first half, the Clippers’ advantage was whittled away as fast as it took Spurs guard Dejounte Murray to sprint from one end of Staples Center’s court to the other, as he so often did while helping turn turnover after turnover by the Clippers into a fast-break basket

The 6-foot-4 Murray is all legs, arms and stick-’em hands, and his layup after stealing a pass by Luke Kennard and dunk after swiping Paul George were hallmarks of a careless offensive performance in which the Clippers committed 12 first-half turnovers — only two days after committing 20 in a loss to Chicago — and got outscored by 15 in fast-break points.

“Careless turnovers,” Clippers coach Tyronn Lue said. “We’re doing it too much. Every game we have four or five turnovers trying to make the advance pass. Just got to be smarter than that.”

Three minutes into the second half, the Clippers’ lead was no more and Reggie Jackson had started so poorly, making just four of 13 shots, that he ditched his signature headband in search of a fresh start.

It didn’t work. Then he put it back on.

During a six-minute span to end the third quarter, Jackson scored 10 points, assisted on baskets that led to five more and sparked a 19-4 run that turned a once-sloppy effort into a sharp win to improve to 9-5.

Jackson scored 21 points with a career-high 17 three-point attempts, and was “huge for us in the second half,” Lue said.

George scored 34 with nine rebounds and four assists after a tactical change by Lue to use their chief playmaker in more high pick-and-rolls, as they used him to great effect last season, than isolation sets.

It was also the second consecutive game that George, who routinely has felt he does not earn enough foul calls, attempted double-digit free throws.

Lue said he believed George has begun driving through contact looking for shots rather than attempting to draw calls.

George also turned the ball over six times. Although he noted the team’s lack of practice time in recent days, he said there was “no excuse” for the turnovers.

It was an energetic answer on a night when the Clippers had fewer options than usual within their rotation after Terance Mann (ankle) and Justise Winslow (personal reasons) both sat out and Nicolas Batum played only 14 minutes because of Achilles tendon soreness, according to Lue.

The Clippers begin a two-game trip Wednesday in Memphis, before returning to begin a six-game homestand that includes consecutive games against Dallas.

Mann has averaged a career-high 29.7 minutes and 10.1 points off the bench, and the Clippers have outscored opponents by 7.7 points per game in his minutes, the team’s second-highest plus-minus, behind only Kennard (plus-9.5).

“We’re just gonna miss his energy I think first and foremost, just the way he rebounds the basketball, he attacks, the passion he plays with every single night,” Lue said.

That limited number of available players led to a season-high 25 minutes for reserve forward Amir Coffey and the first sighting of rookie wing Brandon Boston Jr. since Nov. 9.

He scored 13 points in 20 minutes in an appearance that was highly anticipated by the Clippers, who love his fearlessness on the court, after a turn in the G League.

Boston, a former top recruit who fell to the second round in June’s draft, has resurrected the promise that made him a prized Kentucky signee out of Chatsworth Sierra Canyon High.

And to think that Boston nearly missed his cue.

Flexing his biceps and yelling in celebration over his mask in the first quarter after a dunk by Ivica Zubac, Boston didn’t notice at first that Lue was calling for him to check in.

It took a bump from teammate Jay Scrubb for him to realize what was happening.

After 13 NBA minutes all season, he played 20 against the Spurs.