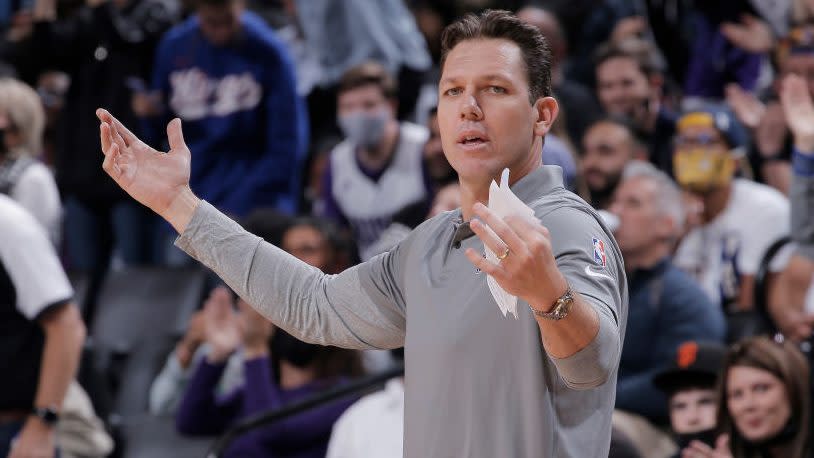 Owner Vivek Ranadive desperately wants his Kings to end their 15-year playoff drought — miss the postseason this year and they will pass the Donald Sterling era Clippers for the most years consecutively missing the playoffs in NBA history.

Sacramento has lost four in a row and at 5-8 sit at 11th in the West — outside even the play-in games — with the 13th ranked offense and a bottom-10 defense.

Someone’s got to take the blame, and since Ranadive isn’t going to fire himself, it is Luke Walton who could lose his job if things continue to go south, reports Sam Amick and Shams Charania of The Athletic.

With the Kings (5-8) in the midst of a four-game losing streak heading into a Monday night game at Detroit, sources say the third-year coach’s job status will likely be in peril soon if the current slide continues…

“Likely be in peril soon” is vague, and it’s too early to lay everything at the feet of Walton. That said, he was on top of everyone’s “coaches starting the season on the hot seat” list because of the pressure to win in Sacramento. Also, with Alvin Gentry on staff, the Kings have an experienced NBA head coach to turn to if they decide to move on.

Walton’s seat got warm last season, but he had a strong relationship with general manager Monte McNair, and two fully guaranteed years on his contract, and that saved his job, according to the report. This season feels different.

The problems with the Kings are not all on Walton. The Kings brought back the same imbalanced core of a roster, and same coaching staff, that went 31-41 last season. De’Aaron Fox is among the many scorers struggling to start the season, shooting 41% overall and 23% on 3-pointers. Tyrese Haliburton hasn’t taken a step forward in his second season. The core of this team just seems stagnant, not growing, and while Walton can take some blame there, the players deserve some, too. And the front office put this roster together.

Maybe the Kings turn it around a little, pick up a couple of wins, and flirt with .500 and the play-in tournament all season. But Walton can put his Sacramento home on the market if they have another nine-game losing streak — the Kings had two of those last season. There will not be that kind of patience this season.

Check out more on the Kings