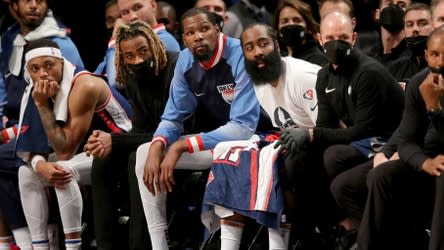 The Nets lost their fifth game of the season on Tuesday night, losing 117-99 to Stephen Curry and the Golden State Warriors in what some were calling the NBA Finals preview.

After the tough loss, head coach Steve Nash was asked about the team’s losses to some of the top contending teams this year like the Milwaukee Bucks, Miami Heat, Chicago Bulls and now the Warriors.

“Well I just don’t think we’re in that category yet, we got a lot of work to do,” Nash said. “We’re trying to improve as a group, get better. Hopefully we can find a way to overcome some of our deficiencies by the end of the year. I think the guys have been great as far as buying in to what we want to do defensively. No one would’ve picked us as a top-10 defense to start the year, we’re defending, we’re finding a way.

“I think offensively we have all these different lineups, different backgrounds, styles of play. 10 new players on our team, it takes time. We started the year with a continuity plan from last year that got thrown out the window honestly when Kyrie didn’t come back, so we’re trying to build and figure it out. When you play a really good defense it really tests you. I think tonight it was a great lesson for us that we got to double down on some of our principles when the going gets tough.”

Golden State outscored Brooklyn 35-18 in the third quarter, after leading by just five points at the half. Nash went on to talk about what went wrong in both the first half and then the third quarter when things started to get out of hand.

“Yeah we mentioned how good they are in the third, they’re pretty good in every quarter,” Nash said. “I don’t think we had our juice tonight. The first half, we’re still in the game but giving up offensive rebounds, not protecting our rim, getting out of our basic coverages. Then it obviously fell apart a little bit in the third where I thought we got really stagnate with the ball and our energy dropped. Wasn’t enough fight against a team that’s that good.”

Curry led the Warriors with 37 points on 12-of-19 shooting including going 9-of-14 from beyond the arc in another special performance in New York. Nets star Kevin Durant, who’s still leading the NBA in scoring over Curry (28.9 to 28.7 points per game), had just 19 points in the loss and spoke about what makes his former teammate so special.

“I mean he’s a master at what he does, I’ve been saying that since he came in to the league,” Durant said. “He’s a crafty player that can pretty much do anything off the ball, he can cut to the rime, shoot floaters, shoot threes. Then he can handle the basketball too and get down to his spots. I’ve been there, he puts in a ton of work, he cares about the game, he loves his teammates, plays with energy. That’s what you get any night, every night as a player like that playing at an All-Star, well MVP, Hall of Fame level. You got to respect it.”

Durant went on to talk about what the Nets can do to improve, especially after facing a well-oiled machine like the Warriors.

“We’re getting better at it, we’re understanding the way we want to play each and every game on both ends,” Durant said. “When you play against a team that’s been together, same coaching staff, for six, seven, eight years. All they doing is just plugging in pieces and parts, they understand how they want to play. For us we want to get to that point, understanding where we want to play and then whoever comes in, fall into line that way.

“That’s a process, and it takes a while. I like where we are, guys are getting better. All of us are understanding what we need from one another. It’s only going to get better from here.”

The former MVP added that the team needs to look at the details and see how they can eliminate mistakes. The Nets will look to get back on track when they face the Cleveland Cavaliers (9-6) on Wednesday night at home.

“How we can be more connected on both ends of the floor, how we can pass and play faster on offense, it’s everything you can look at,” Durant said. “Just to see details of the game that we can can get better at and be more consistent with. I think that’s every team’s goal is to be more consistent and eliminate mistakes from your repertoire. We’re on that journey right now, so it’s a great test for us and we look forward to tomorrow.”