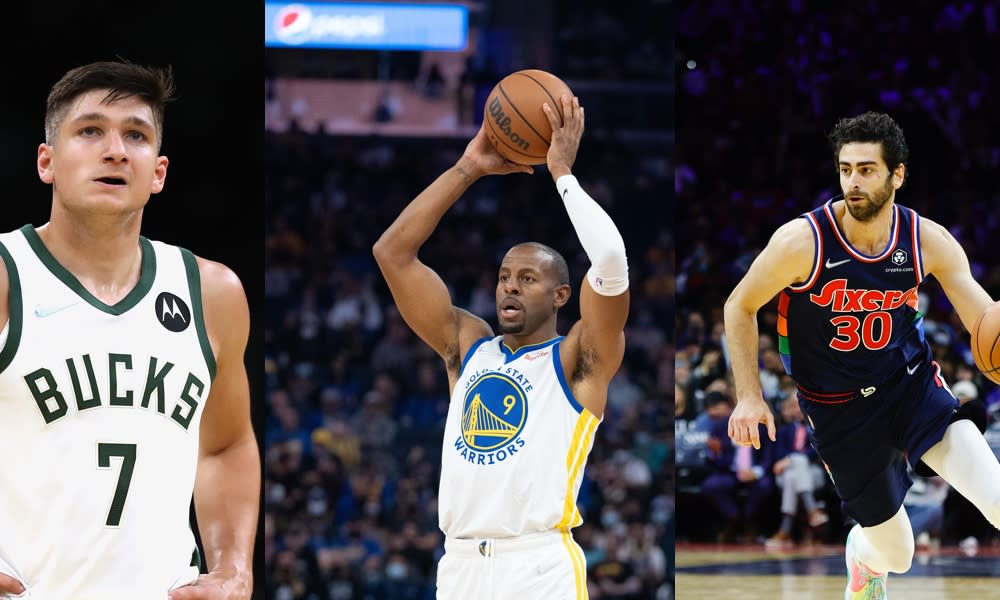 As part of a new series at HoopsHype, we’re breaking down three interesting topics we’ve seen happening around the NBA over this past week.

Of course, the name of this column is derived from basketball’s three-second violation rule. But the goal of this exercise is to observe a few subjects and then explain the key to why it’s happening and what makes it interesting.

Here are our three highlights from the last week of the NBA’s 2021-22 season:

When the Memphis Grizzlies traded Grayson Allen to the Milwaukee Bucks, it hardly seemed like it would be one of the more impactful moves of the offseason.

Allen, however, has started every game that he has played for Milwaukee and he has made his presence known in a massive way. He is averaging a career-best 16.0 points per game and he is shooting 43.8 percent from beyond the arc on a higher volume of shooting than ever before. Only Stephen Curry and Buddy Hield have hit more three-pointers than Allen thus far.

What is particularly exciting is that he has been more efficient than ever when shooting off the bounce. He is averaging 1.68 points per possession on jumpers off the dribble, per Synergy, which is the best in the NBA. Compare that to last season (Allen’s 0.87 PPP ranked in the 48th percentile) or the season prior (0.70 PPP ranked 24th percentile) to see just how much he has grown.

His footwork and ability to keep himself composed with the ball in his hands have helped him lose his defender and beat his man, then hit some absurd stepbacks. Plus, he is turning the ball over half as often as ever before.

The most obvious change from his tenure with the Utah Jazz and Memphis Grizzlies is that there is more space for Allen to dribble off the pick when it is Giannis Antetokounmpo who is setting the screen. The reigning NBA Finals MVP is a constant threat to score on the dive, which means defenders may sag off Allen a bit more than usual.

Another benefit of playing alongside Antetokounmpo is that he has set Allen up for some easy opportunities after handoffs, which have been some of the most lucrative scoring opportunities for the wing.

Allen leads the league in total three-pointers made off the catch. His consistency has made him one of the most important players on the defending champs. Overall, his offensive estimated plus-minus currently ranks in the 95th percentile among all players, per dunksandthrees.com.

One of the reasons why the Golden State Warriors are playing so well this season is because they’ve re-added Andre Iguodala to their rotation.

Since returning to the Warriors, Iguodala’s playmaking has been particularly stellar. His assist percentage (23.7 percent) is the highest it has been in a decade, per Cleaning the Glass, and his assist-to-usage (1.98) is the best in the league. Although he is a wing, via Backpicks.com, his “passer rating” is the league’s best. And according to RealGM, his pure point rating (8.7) trails only that of Chris Paul and Dejounte Murray.

Some of his passes, like the one you’ll see below, are downright absurd:

Iguodala is assisting on a career-high 4.9 three-pointers per 100 possession, via PBPStats. For comparison, his previous personal best was 2.7. So he’s now assisting on nearly twice as many shots from long-distance as ever before, which is notable for someone who was teammates with Stephen Curry, Klay Thompson and Kevin Durant at the same time.

He may be 37 years old, the second-oldest player in the league and the oldest among the players who are in a rotation considering Udonis Haslem rarely sees the floor. But he still has enough vertical pop left in the tank to throw down this dunk.

Of course, his scoring is nowhere near what it once was. However, he is still finding massive ways to make an impact. Take his recent performance playing against the Minnesota Timberwolves on Nov. 10. He was held scoreless but added 8 assists, 4 rebounds, 2 steals and 2 blocks.

On the defensive end is where he shines, though. Opponents are currently shooting just 4-for-18 (0.50 PPP) on jumpers off the dribble when defended by Iguodala, per Synergy. Meanwhile, according to PBP Stats, his opponents are just 10-for-25 (37.5 percent) when he defends them at the rim. That is currently the best mark among players who have defended at least as many attempts in that zone.

In totality, Golden State has allowed just 90.7 points per 100 possessions when Iguodala is on the floor thus far. That is the best individual defensive rating of all players who have logged at least 150 minutes.

During the minutes when he is not on the floor, the Warriors have allowed 105.4 points per 100. That’s an additional 14.7 points per 100 allowed, which is a pretty massive swing. He has been one of the key ingredients in Golden State’s success.

The Philadelphia 76ers are playing without Ben Simmons, who led the team in touches and passes made this past season. No one on Philadelphia had the ball for more time of possession than Simmons did in 2020-21.

The main player who has stepped up in Simmons’ absence is Tyrese Maxey. But another player who has had more opportunities playing on the ball is 6-foot-7 Furkan Korkmaz.

He is attempting about as many jumpers off the dribble as he does off the catch and his buckets are just as often self-created as they are assisted. But the same could not be said of him before this year.

So what’s the difference? First and foremost, he has shown he has improved his skills with the ball in his hands, which is an incredibly exciting development.

Another thing that stands out is that he looks confident pushing the break in the open floor. As the ball handler in transition, he is averaging 1.4 points per possession thus far. It is still a limited sample size but that currently ranks in the 99th percentile among all NBA players, trailing only Clippers guard Reggie Jackson for the most efficient mark in the league.

But most importantly, head coach Doc Rivers is running plays for the Turkish-born wing.

When including passes, per Synergy, he has finished 47.7 percent of his offensive possessions as the ball handler in pick and roll sets. For comparison, during the 2019-20 campaign, that rate was just 27.9 percent.

It’s a new role for Korkmaz, which means he’s still adjusting. It allows for higher highs, like when he recorded 25 points while shooting 7-for-9 from beyond the arc in a big win over the Chicago Bulls on Nov. 6. But it also comes with low lows, like when he was 1-for-12 from beyond the arc with just 5 points during a loss against the Milwaukee Bucks a few days later on Nov. 9.

If he is firing on all cylinders, he is going to be an X-factor for Philadelphia during a potential playoff run. As he gets more reps with the rock, it’s only going to get easier for him moving forward.