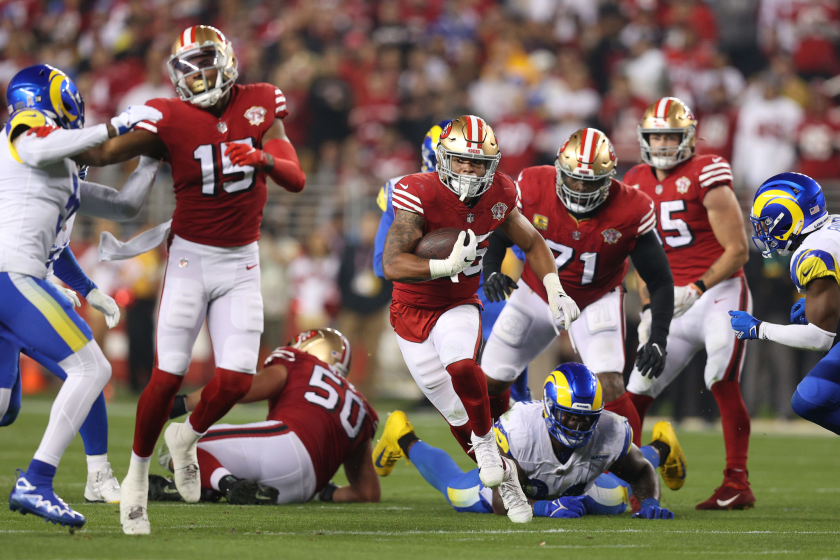 That’s how many times they wanted to run the football against the Rams on Monday night, determined to play keep-away from Matthew Stafford and his high-octane offense.

The final count was 44 carries for 156 yards — precisely triple the Rams’ 52-yard night — and the time-of-possession numbers reflected that.

If the 49ers held the ball for “Stairway to Heaven,” the Rams had it for … sad trombone.

“We’ve run it over 40 I’d say about six times in my career — that’s just my guess,” 49ers coach Kyle Shanahan said after the 31-10 victory. “Usually that’s when you get a lead on people, the game’s over in the third quarter and you’re just trying to finish it out in the fourth.

“But with that [Rams] offense and the skill power that they have, you don’t feel it’s over until right towards the end.”

In some ways, this game felt over in the first quarter after the 49ers turned a pair of Stafford interceptions — both by safety Jimmie Ward — into touchdowns. On his third throw of the game, Stafford misfired on a deep, almost desperation throw to wide receiver Odell Beckham Jr. that Ward swiped.

And on the next Rams possession, tight end Tyler Higbee couldn’t handle a pass from Stafford and Ward turned it into a 27-yard pick-six.

We’ve seen this movie before.

It was Remember the Titans — an eerie replay of the loss to Tennessee a week earlier, when Stafford had a nightmarish 20 seconds of back-to-back interceptions, the second returned for a score.

That frustration resurfaced Monday night, with Stafford just missing and his receivers looking as if their hands were screwed on backward.

Making this especially maddening for the Rams (7-3), they had an opportunity for a tone-setting win in the NFC West, especially with Arizona embarrassed at home Sunday by Carolina and Seattle getting shut out at Green Bay — blanked for the first time in quarterback Russell Wilson’s 150 games.

The 49ers, meanwhile, had yet to win at home in four tries. They unquestionably were on the ropes, and this was Rams coach Sean McVay’s chance to beat Shanahan for the first time since the 2018 season. Instead, McVay lost his fifth straight game against him.

It has to be scary for the Rams because this wasn’t a fluky win for the 49ers (4-5). San Francisco’s pass catchers — George Kittle, Deebo Samuel and Brandon Aiyuk — are finally healthy and rolling, and the defense was smothering.

San Francisco needed to bounce back after a cover-your-eyes 31-17 home loss a week earlier to the short-handed Cardinals, who were missing quarterback Kyler Murray and wide receivers DeAndre Hopkins and A.J. Green.

“I don’t want to call it a true wake-up call,” quarterback Jimmy Garoppolo said. “It kind of put our backs up against the wall for a second. But it made us focus more during the week of practice, which I really liked, and I think we need to do that going forward.”

As for the Rams, while they could barely catch a pass at Levi’s Stadium, they do catch something of a break this week. They’re off this coming weekend, giving them a chance to regroup, get healthy and bring newcomers Von Miller and Beckham more up to speed.

Both of those players made modest contributions against the 49ers, with Beckham making the first catch of the game — five yards on a quick pass to the sideline. Miller had two tackles and tore off one of his signature spin moves on a pass rush up the middle.

The NFL is crazy this season, and every week there are surprising results. Denver romping at Dallas. Jacksonville knocking off Buffalo. Miami rolling over Baltimore.

Now, it’s happening in the NFC West, and clearly the Rams don’t have the luxury of taking anything for granted. If they’re elite, they certainly haven’t shown it the last two weeks.

There’s a home game against Jacksonville, but as the Bills learned, there’s no such thing as a layup in the league this season.

Meanwhile, the 49ers have life. And to some extent, the Rams breathed it into them.