Alisal Fire in California has prompted evacuations, road and Amtrak closures. And the heavy winds are making it hard to tame 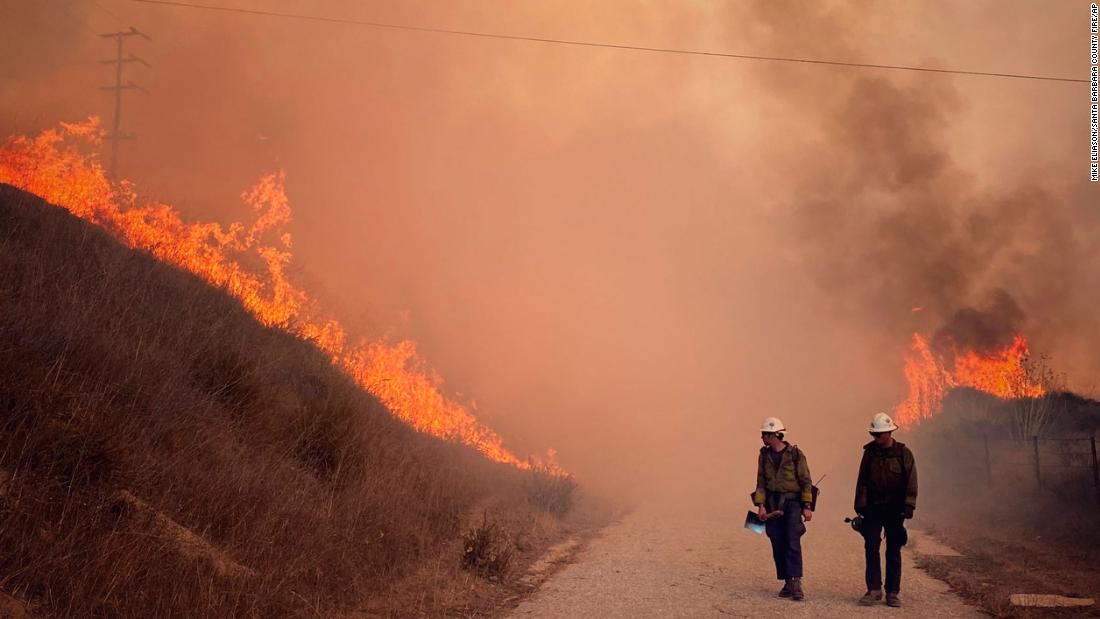 The 14,500-acre fire, burning 20 miles northwest of Santa Barbara in Refugio Canyon, was 5% contained as of Wednesday.

The fire grew quickly after sparking on Monday, officials said. The cause is unknown.

At least 1,300 personnel are responding to the blaze, with more expected to join the effort.

California has had a devastating wildfire season that has been exacerbated by the climate crisis, which has been creating ideal weather conditions for fires to spark and expand.
Given that nearly 90% of the state is experiencing conditions as harsh as extreme drought — the second most severe category according to the US Drought Monitor — putting out the fires is that much harder.
The Alisa Fire threat led the Santa Barbara County Sheriff’s Department to issue evacuation orders for areas between Eli Captain Beach State Park and West Camino Cello as well as Arroyo Honda Canyon and Refugio Canyon. Evacuation warnings were issued for other nearby areas.
California is currently fighting 10 large active fires, the National Inter agency Fire Center said. One of those fires, the KNP Complex Fire, has already destroyed many of the state’s iconic sequoia trees. That fire was 40% contained Wednesday after charring nearly 88,000 acres since September 10, according to Incidence.

Meanwhile, 20 California counties have been warned by utility company PG&E that they could see a Public Safety Power Shutoff (PSPS) Thursday in response to weather conditions that could fuel yet another wildfire.

The Santa Barbara Public Health Department and air pollution control officials issued an Air Quality Watch on Tuesday due to smoke from the Alisa Fire.

“Smoke and ash from the Alisa Fire could affect local air quality. Strong winds, locally and across the state, are also stirring up dust and ash into the air,” officials said in a news release, urging residents to be cautious.

“This is a dynamic situation, and local air quality conditions can change quickly.”

Smoke from the fire can be seen throughout the southern part of the county, including the Santa Inez Valley and along the Octavio coastline, fire officials said on Incidence.

In particular, people with heart or lung conditions, older adults, pregnant people and children should not spend too much time outside and limit outdoor exercise to avoid inhaling the smoke and particles in the air, health officials said.