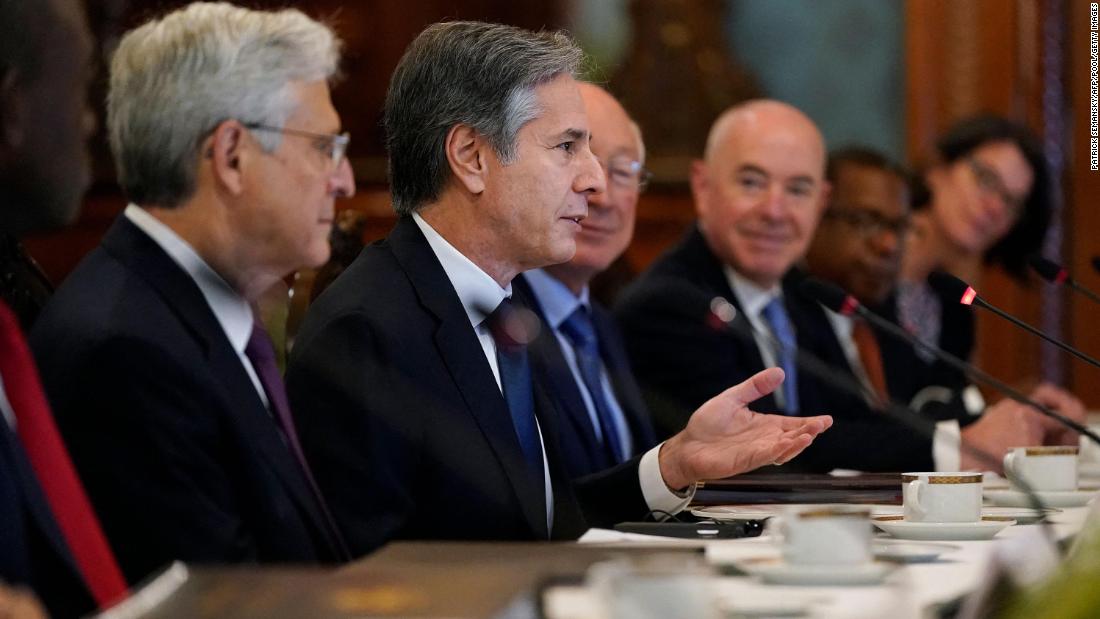 “We’re here because this high-level security dialogue is vital” to the “most urgent challenges facing our time,” Secretary of State Antony Blinken said in opening remarks before a high-level security dialogue at the Mexican Ministry of Foreign Affairs. “We also share a commitment to give all of our people a free, peaceful and prosperous future. For that we need security.”

“It’s time for a comprehensive new approach to our security cooperation,” Blinken said. “One that will see us as equal partners in defining our shared priorities, tackle the root drivers of these challenges like inequity, like corruption, and focus not only on strengthening law enforcement, but also public health, the rule of law, inclusive economic opportunities.”

The agreement will replace the $3 billion Merida Initiative, a 2008 pact meant to fight drug trafficking and organized crime, and is meant to take a more “balanced and sustainable” approach, senior administration officials told reporters Thursday, by addressing not only the shared security challenges but their root causes.

Three senior administration officials sketched the basic parameters of the agreement, with one official saying it “will also allow us to set enforcement priorities together, including with respect to trafficking and firearms, to illegal narcotics, to human trafficking and smuggling, to extraditions of criminals, and to money laundering and illicit finance. In both respects then, both in attacking crime, in attacking causes of crime, the framework marks a new beginning, a new beginning that will make the citizens of both countries safer.”

All three Cabinet officials stressed a theme that administration officials have been hammering home for weeks as they have discussed this trip: that with 2,000 miles of shared border, the intense back-and-forth of goods, services, and people at 55 active land ports of entry, and shared cultural, historic and economic ties, the US-Mexico relationship is vitally important to both countries.

Blinken stressed that the US and Mexico are “connected by vast economic, cultural and family ties.”

Garland noted in his remarks that it was his first trip outside of the US since becoming attorney general, saying, “It reflects the degree of the importance that the Justice Department and the United States accords to these dialogues.”

Mayorkas announced that Friday’s visit was his third trip to Mexico City since taking on the job at DHS. “This focus reflects the fact that our partnership, our relationship is most important,” Mayorkas said. “We are more than just neighbors. We have a special bond and a shared commitment to the people whom we represent together.”

“Our countries have accomplished a great deal together in combatting the forces that seek to disrupt order and imperil the everyday safety of our citizens seeking to make a better life for themselves. But there is more work to do,” Mayorkas said. “We will focus more intensely than before on the root and the core of the forces that threaten us, tackling the underlying reasons why they continue to exist and grow.”

US and Mexican officials did not discuss the “Remain in Mexico” policy during their meetings Friday but are engaged on the issue, Blinken and Ebrard said during a joint news conference after their meeting.

A US lower court ordered the Biden administration to revive the Trump-era border policy that forces migrants to stay in Mexico until their US immigration court dates. The Department of Homeland Security has said it’s engaged in “high-level diplomatic discussions” with Mexico about restarting the policy.

“US immigration law, of course, remains in effect. We’re continuing to work very closely with Mexico to promote a safe, orderly, and humane process along the shared border, and to address the myriad challenges of irregular migration,” Blinken said in Mexico City on Friday.

“Broadly speaking, I think the collaboration we have on working this incredibly challenging issue together, at least in my experience, has never been stronger,” he continued. “But we both recognize that even as we’re dealing with the immediate challenge and pressures, which we’re in almost daily contact across our governments to do that, we also have to focus on some of the, again, the long-term drivers, and, more to come on this, fostering greater regional collaboration and cooperation.”

When Blinken was asked about the treatment of Haitian migrants at the US-Mexico border, he said the US is in “close, daily contact” with its Mexican colleagues about the issue.

He said the US is trying to make sure that people who attempt to cross the southern border as part of an “irregular migration” are aware that they will put themselves in “tremendous stress along the route” and they will not be able to get into the US.

Blinken noted common challenges the countries share, including transnational criminal organizations that work on both sides of the border. “They’re responsible for most of the illicit drugs and contraband trafficked in the United States, as well as into Mexico, and a great deal of violence and insecurity here as well,” he said.

“Both of our Presidents have named as priorities pursuing criminal networks, preventing trans-border crime, protecting our people,” Blinken said.

“To do that, we have to do more to disrupt arms and narcotics trafficking … to strengthen border and port security, to dismantle the financial systems that sustain organized crime and to root out impunity and to hold accountable human rights abusers, and critically, to address public health issues of addiction which fuel the drug trade, cause enormous pain for families and communities and fuel demand as well. These are national security issues. They’re law enforcement issues. And they’re justice issues,” he said.

“Criminal organizations are constantly adapting,” Blinken added. “So, we need to adapt as well.”