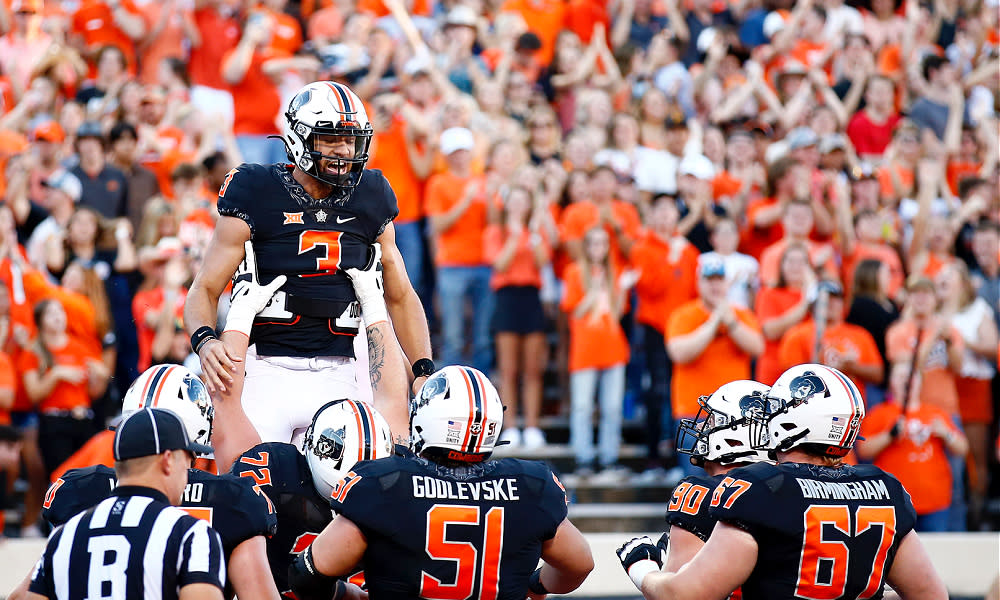 Before we get going, here’s the crazy call that we think we have right, and begging all forgiveness in the meantime as everyone is checking to make sure.

There probably won’t be enough six-win, bowl eligible teams. With 4-7 Hawaii losing to UNLV yesterday, it probably won’t get to six – it normally needs seven – with Colorado State and at Wyoming to close. So …

It comes down to the top five-win teams among the Graduation Success Rate. Of the teams ranked highest on GSR that should matter for …

Again, looking into this as we speak – assuming things go back to the way they were before 2020 – but for now we’ll slip in one five-win team into the mix.

– All Power Five conferences get a team into either the New Year’s Six or the College Football Playoff. The ACC, Big Ten, Big 12, Pac-12, SEC all get a top team into one of the big games, and the top-ranked Group of Five champion is in, too.

Set the over/under on this at about 300. The winner of the ACC Championship – likely Pitt vs Wake Forest – will almost certainly be here along with the third-best SEC option.

It all depends on whether or not the College Football Playoff committee keeps Michigan ahead of Michigan State, and that all depends on what happens over the next two weeks when Ohio State gets the Spartans and then the Wolverines. Assuming the Buckeyes win those two, and both by roughly the same margin, the lower-ranked Big Ten will be here and the higher-ranked one will go to …

The call continues to be that Oregon will lose to Utah in Salt Lake City, but it’s not going to happen a second time in a rematch in the Pac-12 Championship. Again, flip a coin on Michigan and Michigan State to be here depending on how each one handles Ohio State.

The call is that Georgia beats Bama in the SEC Championship, but don’t be totally stunned if Auburn ruins things before that at home against the Tide. The Big 12 is stickier. Here we go …

Baylor wins out against Kansas State on the road and Texas Tech at home, and Oklahoma State beats Oklahoma in the regular season finale. Baylor would then go to the Big 12 Championship with a rematch of an earlier loss to OSU. The Cowboys win again, so …

Georgia gets its choice as the No. 1 overall seed – it’ll want the Orange Bowl, and Cincinnati will slip on in at 13-0 after 1) Wake Forest loses again, so there’s no one-loss ACC Champion, and 2) Georgia beats Alabama in the SEC Championship and 3) Oregon loses to Utah but goes on to win the Pac-12 Championship.

Plug in whatever one-loss Big Ten champion ends up getting through – but don’t dismiss the idea that, possibly, Wisconsin and that defense pulls off something amazing in the conference title game. Ohio State will struggle, but it’ll get through a gauntlet of a final three games for the No. 2 spot.

Oklahoma State is the funkier call. It beats Texas Tech on the road and takes care of Oklahoma at home, Baylor wins its last two games to get to the Big 12 Championship, and Oklahoma State wins the rematch to be 12-1 on the way to the No. 3 seed.