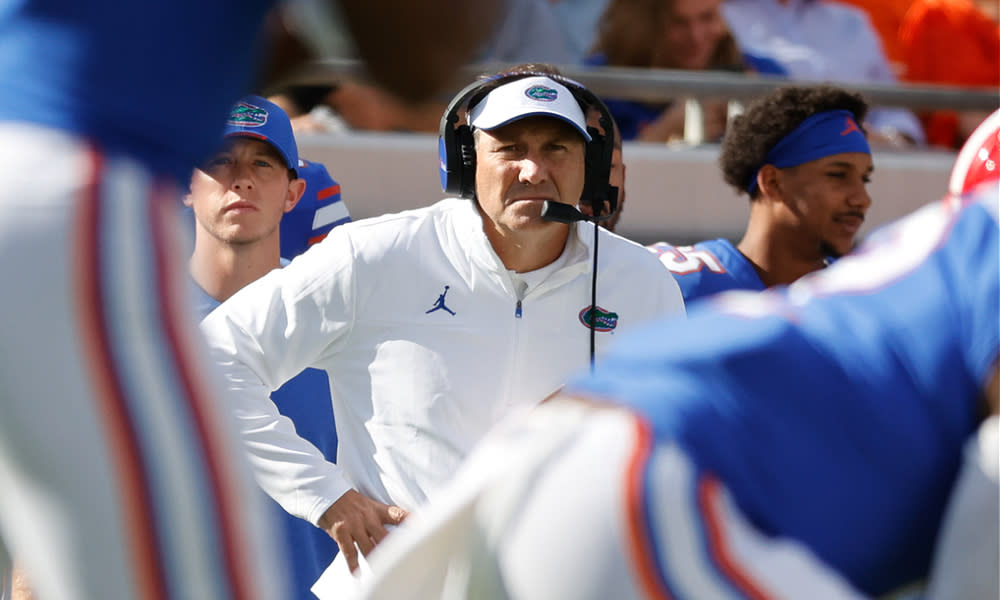 Which coaches are on the hottest seats and under the most pressure after Week 11 of the college football season?

Washington State’s Nick Rolovich was fired a few weeks ago under far different circumstances, Texas Tech was done with Matt Wells, USC’s Clay Helton has already been hired by Georgia Southern, TCU’s Gary Patterson was unceremoniously let go after a brilliant run, and Ed Orgeron went from owning the college football universe two years ago to playing out the string at LSU.

UConn, UMass, and Akron are starting over, too.

There’s zero patience at this point for college football head coaches who are struggling – heaven forbid if you lose a big November game if you’re already on a hot seat.

Here are ten that might not necessarily be fired with a loss or two, but the alumni and base won’t be pleased.

It seems like he hasn’t left the hot seat over the last four seasons, and then, all of a sudden, he’s fine. This might be different.

After a losing season in 2020, the 3-1 start seemed promising with a strong defense and an offense that could just get by. A close loss to Notre Dame didn’t seem like that big a deal, but is was the start of a 2-3 run.

Now at 5-5, losing at Miami would put the pressure on to another level, and look out if Virginia Tech does the unthinkable and loses to Virginia for the second time in three seasons.

The five-game losing streak has been beyond brutal. Stanford had a nice-looking team coming into the season, it was 3-2 following a shocking win over Oregon, and then it all fell apart to lock in a second losing season in three years. Losing to Cal this weekend would be a big problem.

The guy’s an offensive coaching legend who’s been at Duke since 2008. He took the team to an ACC Championship appearance – yeah, Duke – in 2013, and everything was going fine through 2018.

Since starting out 4-2 in 2019, Duke has gone 6-21 and is now on a six-game losing streak following a 3-1 start. The Blue Devils haven’t been closer than 25 points five of their last six games

He’s a good guy head coach who can’t get this thing going. After a great run at Illinois and a good start at Temple going 8-5, the Owls have gone 4-13 since then.

Things seemed promising with a 3-2 start and a win over Memphis, but since then the Owls have gone 0-5 by a combined score of 217-35. The O hasn’t scored more than one touchdown in four of the last five games.

After a terrific start going 23-16 in his first three seasons with three bowl appearances, everything got ugly in a hurry in a winless 2020. Fine, 2020 was 2020 – free passes all around – but this year’s team can’t get off the ground going 1-9 with the lone win coming against LIU.

NEXT: 5 Coaches Who Won’t Get Fired, But Need A Win

Coaches On The Hot Seat: No, They Won’t Get Fired, But … WIN NOW

The guy’s been brilliant at Navy with 103 wins at the school and a run of three AAC West titles in five seasons, but the 2021 team is 2-7 after going 3-7 in 2020. The team isn’t playing that poorly, Niumatalolo has lost 12 of his last 14 games as the O has totally stalled over the stretch.

East Carolina is up next. That will be tough, but losing to Temple would hurt, and obviously a second straight loss to Army isn’t okay.

All Mullen did was take Florida to the SEC Championship game last season and push one of the all-time greatest teams to the brink in one of the best heavyweight fights in the College Football Playoff era. But Florida lost to Alabama, and that came off a stunning loss to LSU, and the bowl loss to Oklahoma was brutal – even with all the stars sitting out to get ready for the NFL.

And now he’s not good at coaching football?

After the blowout loss to South Carolina and the weird 70-52 win over Samford, the 5-5 Gators need to at least go bowling. Losing at Missouri this weekend would be a huge issue, and don’t even start if the Gators lose at home to Florida State.

The 44-20 win over Colorado was huge. Now the Bruins are finally bowl eligible in the Chip Kelly era, but it would’ve been nice to be a bit more in the Pac-12 title chase – 44-24 loss at Utah ended that. All is fine with wins over USC this week and Cal to close, but …

No, he won’t be fired, but it wouldn’t be a positive to lose to USC or Cal.

Give a ton of credit for Diaz, the staff, and the players for battling through all the negativity of a 2-4 start to go on a three-game winning streak. There were a few brutal close losses before taking down NC State and Pitt to get into the ACC title hunt and then …

Pffffffft. The air went out of the balloon. Losing to Florida State is always going to sting for the Miami head coach, no matter what.

Diaz should be fine – he’s 5-5 so far and Miami should go bowling. But if the Canes drop the last two winnable dates to Virginia Tech and Duke, there’s a problem.

And to think, with a 4-1 start the world was all his after the first half in Dallas in Oklahoma. One Caleb Williams fourth down touchdown run later …

Of course he won’t be fired or bought out – don’t let social media screw you up – but this hasn’t gone well.