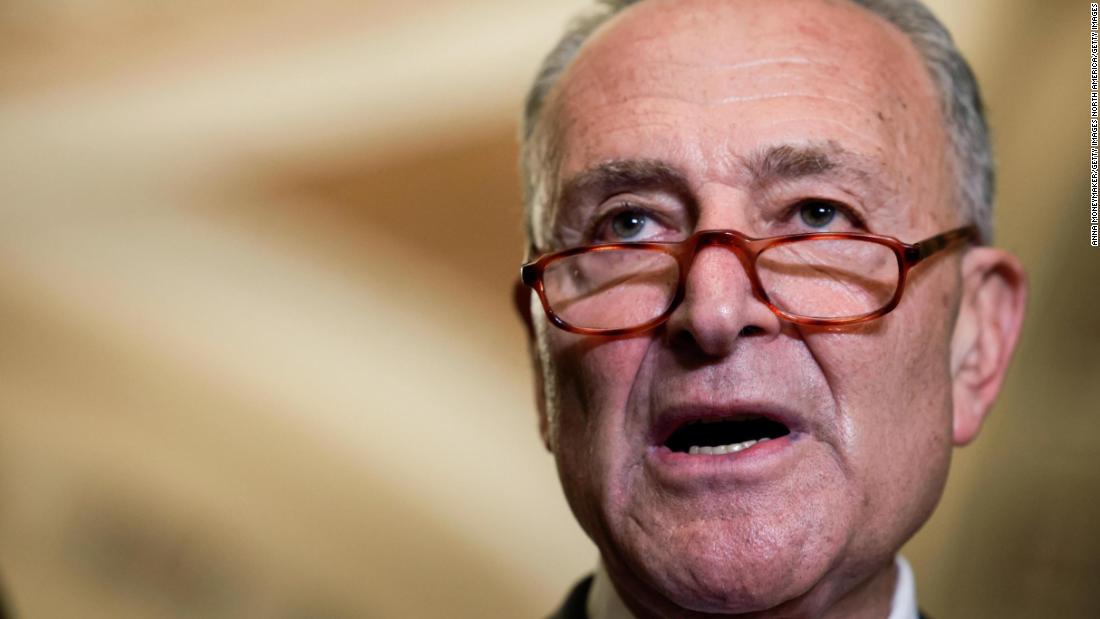 All eyes will turn to finishing negotiations on the separate multitrillion dollar economic bill that would expand the nation’s social safety net, as well as on government funding and the debt ceiling, which are both set to expire in early December.
In a letter to Democratic colleagues Sunday, Senate Majority Leader Chuck Schumer said it is “likely” lawmakers will need to pass a continuing resolution — or a temporary extension in funding — to fund the government past December 3, the current deadline.

It’s unclear how Democrats will address the debt ceiling deadline after Republican leaders, including Senate Majority Leader Mitch McConnell, have repeatedly stated they will not help with legislation to raise the limit. Republicans have insisted that Democrats must act alone to address the debt limit through a process known as budget reconciliation, which would require no GOP support for passage.

Democrats have argued the issue is a bipartisan responsibility. While Democratic leaders have publicly dismissed the possibility of using reconciliation — arguing the process is too lengthy and unwieldy and that the risk of miscalculation would be too high — as the deadline looms, it could be the only way to address the issue without changing the filibuster, which Sen. Joe Manchin of West Virginia has repeatedly opposed.

Also Monday, Biden plans to sign the bipartisan infrastructure bill in a ceremony expected to draw a mix of Democratic House and Senate lawmakers, as well as governors and mayors from both parties.

GOP Sens. Lisa Murkowski of Alaska and Susan Collins of Maine, who supported the bill alongside 17 other Senate Republicans, are planning to attend, although it’s unclear if additional Republican senators will join the ceremony. Even though he voted for the bill, McConnell has said he does not plan to attend. GOP Rep. Don Young of Alaska, one of 13 House Republicans who voted to approve the bill, is also planning to attend, according to his office.

This week, while House Democrats will focus on trying to pass the $1.75 trillion economic bill, known as the Build Back Better Act, Schumer said in his letter the Senate will instead have a vote on the National Defense Authorization Act (NDAA), a crucial bill that funds the nation’s military and intelligence operations.

Schumer also noted Democrats are looking to add the text of the United States Innovation and Competition Act, the China competition bill that passed the Senate earlier this year to address supply chain issues, to the NDAA. He said they’ll have a vote to repeal the 2002 US war authorization in Iraq, which Schumer had committed to earlier this year. Schumer said in his letter that he thinks he has Republican support for including the US Innovation and Competition Act in the NDAA.
Biden’s sweeping economic bill remains stalled, with moderate Sen. Manchin being the main holdout. He has raised concerns that the bill could add to the country’s inflation woes, pushed back on provisions to reduce methane emissions, opposed a Medicare expansion, demanded changes to the tax provisions in the House proposal and resisted measures aimed at helping undocumented immigrants.
And in the House, a group of House moderate Democrats have said they won’t vote for the economic bill without a final score from the Congressional Budget Office. The CBO, the federal agency that provides budget and economic information to Congress, said last week it cannot give a definitive date for when it will have a final cost estimate score of the bill. But most Democratic lawmakers still want a vote on the bill this week.

“On a bill of this magnitude, this process takes time and patience,” Schumer said in his letter Sunday. “Timing of consideration of the BBBA in the Senate will largely depend on when the House sends us the bill and when CBO finalizes their scores for all of the committees, which are needed to complete the ‘Byrd Bath’ process.”

Rep. Pramila Jayapal, chairwoman of the Congressional Progressive Caucus, said Sunday she is confident a vote in the House could happen this week without a full CBO score.

“I do believe that we will have a vote this week on the Build Back Better act. It will go to the Senate and then it will be up to the Senate Democrats and the President, who gave us his commitment that he believed that he could get this across the finish line in the form that the framework was presented,” the Washington state Democrat said on MSNBC Sunday morning. “So, yes is the short answer. We will have a vote this week.”

Schumer also noted in his letter that the Senate’s schedule for the rest of the year could run longer than predicted.

“Keep your schedule flexible for the remainder of the calendar year,” he said in the letter to fellow Democratic senators. “I am confident we can get each of these important items done this year, but it will likely take some long nights and weekends.”