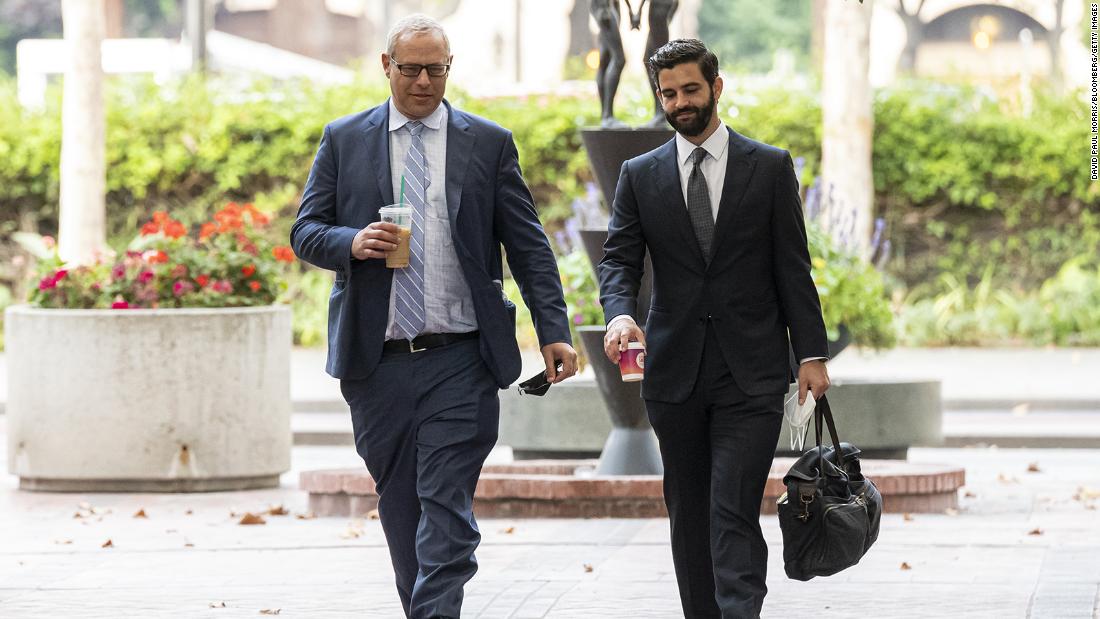 Rosendorff, who ran Theranos’ clinical lab during a crucial period for the startup as it launched blood testing to consumers with Walgreens, has occupied the witness stand for the better part of the past six out of the 12 court days since the highly anticipated trial kicked off last month. Wednesday marks his sixth day on the stand.

Rosendorff, who was revealed last week as a key whistleblower, was called to testify by the government as it makes its case to jurors that Holmes knowingly misled patients, doctors, and investors over Theranos’ capabilities in order to take their money. (Holmes, who faces up to 20 years in prison, has pleaded not guilty.)

Rosendorff said he departed the company feeling “very skeptical” about the accuracy and reliability of its tests. He testified he felt it “was a question of my integrity as a physician” to not stay at the company and continue to endorse test results he “didn’t have faith in.” He’s said he “came to believe that the company believed more about PR and fundraising than about patient care.”

Much of his testimony was in the scientific weeds as he was questioned about specific tests and lab protocols. He spent the vast majority of his more than 20 hours of questioning being prodded by the defense — which made clear in its opening statements on September 8 that it planned to point the finger at those who served in the lab director position as being legally responsible for any failings of its blood tests. The defense attempted to portray Holmes, who started the company at 19, as a college dropout who was unqualified for the role.

During his cross-examination, Lance Wade, a defense attorney for Holmes, sought to discredit Rosendorff, who is now known as the first and most important source in helping then Wall Street Journal reporter John Carreyrou expose the company’s failings in 2015. Wade attacked Rosendorff’s motivations, his credibility, and his competence.

At multiple points during his days of testimony, Rosendorff testified that he felt an obligation to “alert the public,” including exploring a whistleblower lawsuit. The defense tried to portray the potential suit as an indication he was financially motivated, given he might have been entitled to a percentage of the recovery. He ultimately didn’t move forward with the lawsuit but did speak with Carreyrou about his experience.

Perhaps the most pointed comments from Wade came when arguing to Judge Edward Davila Tuesday outside the presence of the jury that he should be allowed to question Rosendorff about his career after Theranos.

As Wade framed it, since leaving Theranos in late 2014, Rosendorff has worked for three different companies, each tied to its own set of controversies. Wade argued that his competence in subsequent jobs is relevant because “he was incompetent at Theranos, too.”

“If he was incompetent and didn’t do his job, that is exculpatory of Ms. Holmes,” Wade argued.

Prosecutor John Bostic pushed back on Wade’s attempts to tie Rosendorff to the issues at other companies, including failed biotech startup uBiome, whose founders were charged with criminal fraud pertaining to its billing practices, not its lab operations.

Judge Davila largely agreed, telling Wade that he was already “grilling” Rosendorff over the course of four days about his competency. He ultimately only permitted Wade to lightly question Rosendorff about his current job as a lab director at PerkinElmer, which was the subject of a recent Centers for Medicare and Medicaid Services (CMS) investigation. The same agent who had investigated Theranos inspected the lab where Rosendorff is currently a director.

Wade sought to portray Rosendorff as potentially biased in favor of the government because his career is threatened by the CMS investigation. The cross-examination ended with Rosendorff conceding that he could lose his license to operate a lab for two years due to the investigation.

Wade also attempted to poke holes in Rosendorff’s commitment to his job at Theranos by pointing out that he joined Theranos in April 2013 and began looking for other jobs in “mid-2013.” Wade plotted that out against some key dates like June 2013, when Rosendorff’s name was put on the clinical lab certification, as well as September 2013, when its blood tests first became available to some patients with Walgreens.

“You essentially had a foot out the door the whole time,” said Wade. Rosendorff pushed back that he was “very committed to my job as lab director,” while acknowledging that he was indeed looking at other job opportunities. Rosendorff had previously testified that he began looking for jobs after growing “disillusioned” with the company’s priorities.

Wade pressed him, asking “That’s so you could go start your other job?”

Rosendorff said he wanted to be off the license “because I was uncomfortable with the legal responsibility that I held at Theranos at that time.”

On Wednesday, Rosendorff responded to a question from Bostic about the difference between responsibility (“what you’re legally responsible for in the eyes of CMS”) and authority (“the actual power to make those things happen and implement them in the laboratory”). Rosendorff said it was Holmes who held the power, which came from “business priorities,” rather than regulations.

In all, Rosendorff called Theranos the “most complicated laboratory I’ve ever had to supervise or direct.”