Finally, Texas and Gary Patterson’s timing works out for the perfect union | Opinion 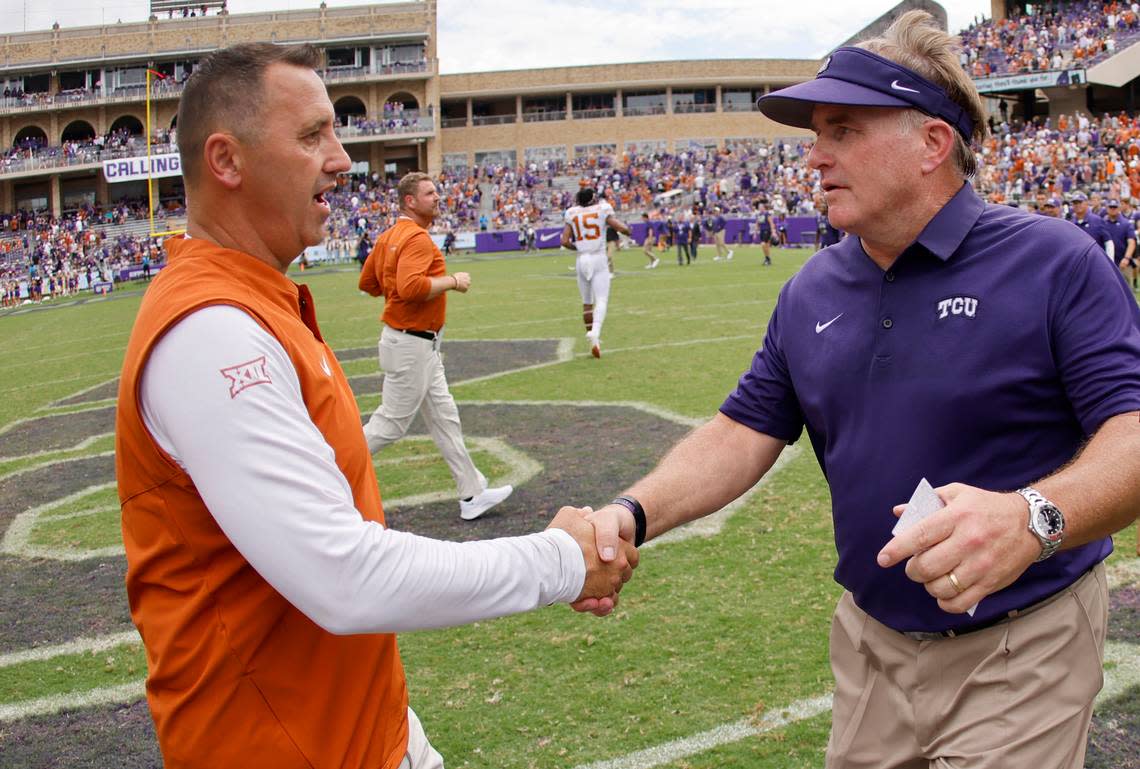 While the Texas defense was exposed by mighty Kansas, one of the best defensive coaches in football was spotted around Austin.

Former TCU football coach Gary Patterson was in Austin over this past weekend, but he was not scouting homes or interviewing for a job.

Patterson was encouraged to get out of Fort Worth, and was invited by some friends down to Austin to just get away.

With his bank account, the weekend destination should not be Lake Lady Bird. Think Fiji.

According to sources, before he went to Austin he had been in the TCU coaches’ meetings trying to help out for the Frogs’ next opponent, Oklahoma State. Let’s just say it wasn’t going smoothly, so GP wisely decided he just had to get out.

That he was in Austin while Bevo was fried by a fake bird is a coincidence, but there is potential for a merger between the University of Texas and Patterson.

After all of these years the timing works for Patterson and Texas to be together.

On Saturday night in Austin, Texas suffered its most humiliating defeat since … since the last time it lost to Kansas.

Texas’ 57-56 defeat to Kansas at home is the kind of game that gets coaches fired.

In 2016, Texas lost to Kansas and coach Charlie Strong was fired shortly thereafter.

Kansas has four wins in the Big 12 since 2016, half of them against the University of Texas. The Jayhawks other two Big 12 wins in that span are against Texas Tech and TCU. (Props to Baylor for defending this state’s honor.)

First-year Texas coach Steve Sarkisian is not going to be fired, but the first part of this sentence says nothing about his defensive coordinator.

The best Texas can do this season is a 7-6 record, which would require a three-game winning streak that ends with a win in the PPP Loan Forgiveness Bowl on The Ocho.

The concern over Texas’ hiring of Sarkisian has been justified as Texas looks worse than some of Tom Herman, or Charlie Strong’s, worst days.

Someone is going to feel this, and it’s not Sark’s turn.

If anyone is going down, it’s defensive coordinator Pete Kwiatkowski.

UT’s defense is currently ranked 105th out of 130 teams in FBS, and 117 against the run. When your 4-6 team is on its longest losing streak since 1956 and coming off a loss to Kansas, you know something will change.

On Monday, Sark’ told reporters that no one has told him he must make staff changes.

Patterson wants to coach again, and if a decent head coaching position is not offered he will, and should, be a defensive coordinator somewhere next season.

The irony is after Patterson casually looked at a few different jobs during his 20-plus years in Fort Worth, which included Washington, Nebraska and Tennessee. However, the one he wanted was Texas.

(Incidentally, other than TCU there are currently seven additional head coaching openings on the FBS level, and included in that group is Washington, which fired Jimmy Lake on Sunday.)

Patterson didn’t necessarily want to be the head coach at Texas. The butt-kissing and constant schmoozing required with that job never appealed to him.

What he wanted was Texas to want Gary Patterson.

There was always something in the way. An Art Briles. A contract extension. A statue.

Technically, Patterson doesn’t need a job ever again, but there are no signs he’s ready to be a Bob Stoops or Chris Petersen and simply be done.

Or an NFL team could be interested to hire Patterson as a defensive coordinator, which may pique his interest.

The question/concern is whether he’s ready to defer to someone else on a coaching staff after being in charge for 20 plus years.

He knows, likes and respects Texas athletic director Chris Del Conte. If anyone could sell this marriage, it’s Del Conte.

It all works, if the interested parties want to try.

After losing to Kansas (again), Texas has needs.

And Gary Patterson would fill one.