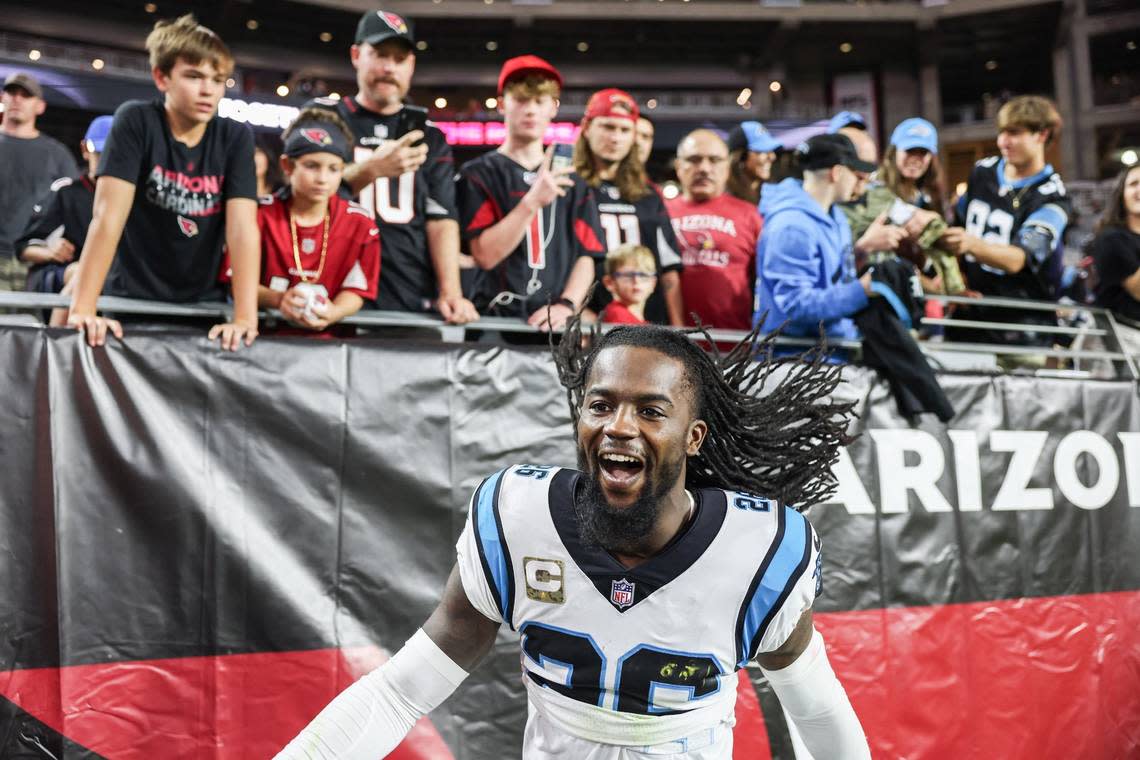 The Carolina Panthers (5-5) played arguably their best game on Sunday after dominating the Cardinals 34-10 on the road.

They were the only team in the NFC South to win, too, and they are back in the hunt for the playoffs with a new offense and optimism heading into Week 11.

Here are five takeaways from their win:

There’s been one constant for the Panthers this season, and that’s the defense. Despite the offense, and occasionally the special team’s struggling this season, the defense has played tremendously.

Their performance in this game was no different. The Cardinals were without their top two players in quarterback Kyler Murray and wide receiver DeAndre Hopkins and the Panthers took advantage. They entered the game with the No. 2 ranked defense in the NFL, and held the Cardinals to 169 yards of total offense.

They also forced two turnovers — a first-quarter sack-fumble by linebacker Haason Reddick against his former team, and an interception by cornerback Donte Jackson later in the quarter.

Backup quarterback Colt McCoy looked uncomfortable in the pocket all game. The Cardinals running game never got going, either

The Panthers have a playoff-caliber defense. They’ve just needed the offense to capitalize.

When asked what was the biggest difference in their performance, the players all had the same answer.

“Energy was just crazy today,” Reddick said. “Energy was on a different level. It carried over every drive. Even coming out of there through halftime it just carried over.”

Credit Cam Newton, who the Panthers signed on Thursday to a one-year deal. Newton is known for his energy, and he brought it against the Cardinals.

After scoring his first touchdown in the first quarter, he looked at the FOX cameras and yelled, “I’m back!”

That energy permeated on the sideline.

Even Robby Anderson, who has struggled this season and has expressed his frustration at times, was happy.

3. P.J. Walker did what was needed

Quarterback P.J. Walker did what Sam Darnold hadn’t done the past month and a half. He took care of the football and made accurate passes. And that was enough to help the Panthers beat the Cardinals.

He wasn’t spectacular, nor did he have to be. The defense was dominant. Walker just needed to do his job and he did that.

Walker completed 22 of 29 passes for 169 yards. He also had an interception.

Aside from his interception, he didn’t make many mistakes.

“I think anytime your backup quarterback (Walker) comes in and plays the way he played, that gives you a chance,” Panthers coach Matt Rhule said. “A lot of guys rose up around him.”

Walker has started in two games with the Panthers. He’s 2-0 in those games.

Newton will likely take over as the starter next week, but the Panthers know they can count on Walker if needed.

4. Christian McCaffrey is a difference-maker

Last week against the Patriots, McCaffrey was used in a limited role in his first game back from a hamstring injury. This week, they utilized him more and he had his best game of the season.

McCaffrey is a mismatch for any defender. He often found holes and soft spots against the Cardinals defense. He twice got the ball to the goal line, putting the Panthers in the position to score.

The Panthers clearly missed him when he was out. The Panthers are now 4-1 when he plays this season.

McCaffrey briefly came out of the game in the second half and had to go to the team’s blue medical tent.

After stumbling, Rhule said McCaffrey was required to be checked for a concussion. He was eventually cleared. McCaffrey said it was a misunderstanding and that he stumbled over another player’s foot.

5. Offensive line was much improved

The Panthers’ offensive line has gotten some heat this season, and rightfully so. They’ve been among the league’s worst offensive lines.

But in the past three weeks they’ve played well, and have only given up one sack.

“There’s a lot of noise talking about our O-line and disrespecting the way that those guys played and they took that personally and went out there today and played a hell of a game,” McCaffrey said. “They’re like the silent assassins. They’re only getting mentioned when something bad happens.”

Sunday, they were good again, despite being down three starting offensive linemen in left tackle Cameron Erving and center Matt Paradis, who are both on the injured reserve.

The Panthers had 166 yards on the ground and didn’t allow a sack.

They were playing with their eighth different offensive line combination.

“If you look at the starting line-up, four guys were starting who weren’t starting four or five weeks ago,” Rhule said. “That’s an excellent job by (Panthers O-line coach) Pat Meyer,but more importantly by those guys.”