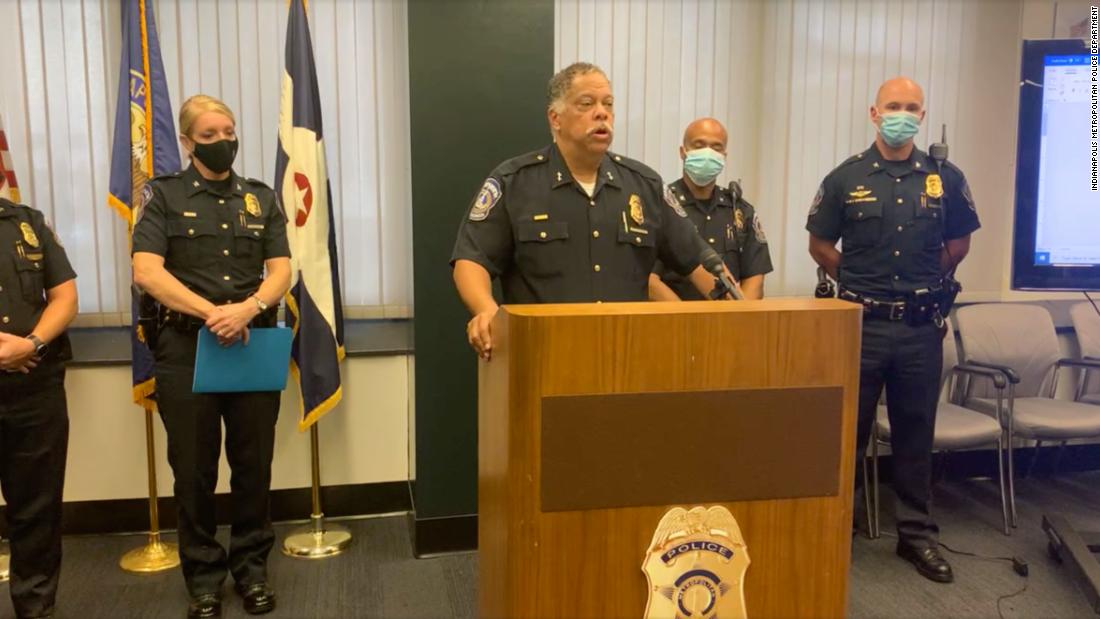 The results of an internal investigation led Marion County District Attorney to charge Sgt. Eric Huxley with official misconduct and battery with moderate bodily injury in connection with the September 24 arrest of Jermaine Vaughn at the city’s Monument Circle, IMPS Lt. Shane Foley said during a news conference.

Huxley has been suspended without pay, and IMPS Chief Randal Taylor has recommended Huxley be terminated for his actions. An IMPS Internal Affairs investigation is ongoing.

“To the citizen involved in this incident, my thoughts and prayers go out to you,” Taylor said in a statement. “That interaction does not represent IMPS and the work our officers do each day to keep our community safe.”

Huxley claimed he accidentally kicked Vaughn in the face, and meant to place his foot on Vaughn’s shoulder, according to the probable cause affidavit obtained by CNN affiliate WT HR.

CNN has reached out to the district attorney, Huxley and Vaughn for comment but has not yet heard back.

IMP has also contacted the FBI and US Attorney’s office about this incident, an IMPS news release said.

What the body camera video shows

Huxley was one of three responding officers investigating a disorderly conduct incident on Monument Circle on September 24. Taylor said he did not expect the other two officers would face criminal charges, but they are on administrative duty pending the conclusion of the internal investigation.

Taylor played video of the arrest during the Tuesday news conference. It showed Huxley kicking Vaughn, a Black man, in the head while he is on his back and handcuffed. Taylor said the video is “difficult to watch.”

The video begins with Vaughn handcuffed and being searched. Vaughn is heard telling the officer, “nobody cares what you do anymore.” Vaughn and the arresting officer then get in a scuffle when the officer began pushing Vaughn back and told him to lean back.

Moments later, Vaughn is on the ground, on his back, with the arresting officer over him. Huxley is seen kicking Vaughn’s head and saying, “you’re done.”

Vaughn was arrested for disorderly conduct, Foley said. Vaughn was then taken to jail, and did not receive medical treatment following the incident, Taylor said.

A probable cause affidavit was presented to the Marion County Prosecutor’s Office Friday, the release said.

“Transparency is one of those things that we’ve been striving for,” Taylor said, explaining why IMP D decided to release the body camera footage. “We’ve done that because we want to build the correct relationship with the community that we need to have.”

The chief said the department first learned of the incident due to an internal reporting process called Blue Team, where officers involved in use-of-force incidents “explain what force was used and why.”

“No racial epithets” were said during the incident, Taylor said when asked whether race played a role in the incident.

“I would be disgusted,” Taylor said. “I would have an issue with that, but I understand, I understand what people will think.”