Rep. Ro Khanna had a suggestion for President Joe Biden on a private conference call earlier this week: Have Sens. Joe Manchin and Bernie Sanders sit in the same room and try to cut a deal on the Democratic Party’s massive social safety net expansion.

Because once they do, the California Democrat suggested, it would almost certainly satisfy the moderate and liberal wings of the Democratic caucus, which have been battling over the size, scope and details of the plan for months.
But Biden, according to multiple sources in the virtual meeting, told the progressive House Democrats that he’s been in politics a long time — and getting them together in the same room would almost be like “homicide.” The group laughed, as Biden then made a joke about getting into the boxing ring with Khanna himself.
The previously unreported exchange underscores the grim reality for Democrats on Capitol Hill: The two men — Sanders and Manchin — are trillions apart on their price tags, have far different ideas on what policies are needed, are at odds over the breadth of the new social programs in the proposal and are diametrically opposed about a central pillar in the package: dealing with climate change.
And increasingly, the feud has become public. 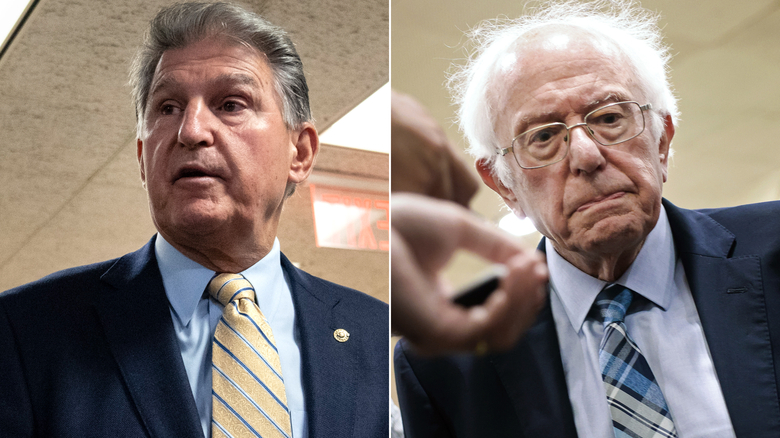 “I can’t speak for Mr. Manchin. I’m not a psychologist,” Sanders told CNN recently when asked about Manchin’s criticism of the economic package.
Getting them to agree is essential for Democrats to pass the furthest-reaching social policy bill since the New Deal because all 50 senators in their caucus need to be on board. And the public disputes between Sanders — a Vermont independent who’s a self-proclaimed democratic socialist and believes in a far-reaching federal government, and Manchin, a conservative West Virginian who has been pushing back in recent days about an “entitlement society” — have caused growing concern within the ranks.
“I just think it’s a matter of getting them in the same room,” Sen. Jon Tester said Thursday. Asked if he’s concerned about their disagreements, the Montana Democrat bluntly said: “Yes.”
They’ve sharply differed over strategy. Manchin chided House Democrats for holding up the bipartisan $1.2 trillion infrastructure bill that passed the Senate in August, while Sanders was instrumental in rallying House progressives to withhold their support for that plan until moderates backed the larger social spending package.
Democrats say having the two sign off on one package could be enough to win over moderate House Democrats — many of whom are taking their cues from both Manchin and Sen. Kyrsten Sinema of Arizona — and the progressive wing of the House, which fell largely in line behind Sanders’ run for president in 2020.
Far more congressional Democrats align themselves with Sanders’ views than with Manchin’s, so the frustration is building about the West Virginia Democrat — both over his refusal to gut the filibuster in order to raise the national debt ceiling and his reluctance to divulge much about his negotiations over the larger economic package.
Neither Manchin nor Sinema addressed their caucus during a lunch meeting Thursday where they talked about their plans to move the Biden agenda.
And Democrats say that’s not unusual.
“Off the charts,” one Democratic senator told CNN on Thursday when asked about the caucus’ frustration with Manchin, contending many senators privately gripe that the West Virginia Democrat takes his public stands for “publicity” reasons.
Biden himself has sounded exasperated at both Manchin and Sinema, according to Democratic lawmakers who have spoken to him. The President told progressives this week that he has spent many hours with the two senators “and they don’t move,” two sources said. Biden even contended that Sinema didn’t always return calls from the White House, the sources added.
The White House did not respond to a request for comment about the President’s private remarks.
But getting Sanders — who has pushed the $3.5 trillion proposal — and Manchin, who reiterated Wednesday that $1.5 trillion was his top line after flirting with a higher number in an exchange with CNN earlier this week, to compromise seems harder by the day.
On Wednesday, Sanders scheduled a last-minute news conference to go point by point through his concerns about Manchin, who earlier in the day had told reporters, “I don’t believe that we should turn our society into an entitlement society. I think that we should still be a compassionate, rewarding society.”
Sanders later dinged Manchin for using “vague phraseology.” Then he took up his criticism an extra notch.
“So my concern with Mr. Manchin is not so much what his views are — I disagree with them — but it is that it is wrong, is really not playing fair, that one or two people think that they should be able to stop what 48 members of the Democratic caucus want, what the American people want, what the President of the United States wants,” Sanders said.
He added: “So, Sen. Manchin has a right to fight for his point of view, has not only a right to be heard, he has a right to get some compromises. He’s a member of the Senate. But two people do not have the right to sabotage what 48 want, and what the President of the United States wants. That to me is wrong.”
Manchin on Thursday downplayed the dispute with Sanders.
“We know each other,” Manchin told CNN when asked about his colleague’s criticism. “I don’t take anything personal.”
Few, though, have a clear sense of how the two can resolve their differences. While they interact one-on-one on the Senate floor, there are rarely meetings with just the two of them. They are both part of Senate Majority Leader Chuck Schumer’s leadership team — and their disagreements often play out behind closed doors, senators say.
“I just think it’s better to have leaders in the room with them, try to bridge their differences,” Senate Majority Whip Dick Durbin, a Democrat from Illinois, said Thursday after the caucus lunch.
Asked about the leadership meetings, Durbin said: “In a polite and civil way, they disagree. But I think it’s constructive. That conversation has to take place for both of them.”
Manchin has been airing his differences directly to Biden, meeting with him behind closed-doors on Thursday, and even writing down his demands in July to Schumer, calling for means testing and “guardrails” for many of the new social programs, spending caps on existing programs and limiting the corporate tax rate to 25%.
Yet it’s Sanders who has been pushing for more expansive plans on the child tax credit, universal pre-K and tuition-free community college along with aggressive incentives aimed at curbing greenhouse gas emissions, something that would have a direct impact on the coal industry in West Virginia.
Democrats say they are hopeful the two will come to an agreement. But no one knows exactly how.
“I can’t completely say,” Sen. Tim Kaine, a Virginia Democrat, said when asked how to get the two aligned on the package. “But I’m confident that we will get it.”