‘Jared Goff Is Terrible’: Terrelle Pryor Is Convinced He or Colin Kaepernick Could Do a Better Job This Second In the League Compared to Lions QB 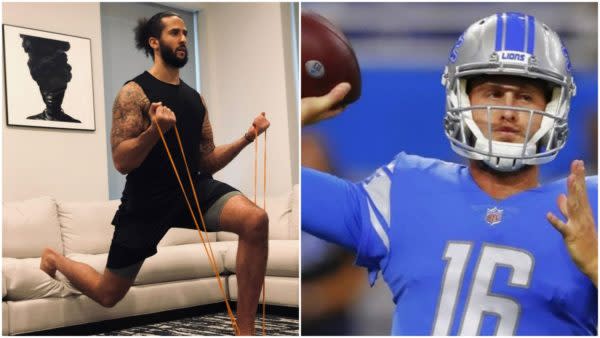 The Detroit Lions vs. Pittsburgh Steelers game went to overtime on Sunday, Nov. 14, and ended in a 16-16 tie. Steelers’ running back Najee Harris was surprised the game could end in a tie.

“I DIDN’T EVEN KNOW YOU COULD TIE IN THE NFL,” HARRIS SAID. “IN MY MIND, I WAS SITTING ON THE BENCH SAYING, ‘I’VE GOT ANOTHER QUARTER TO GO.’ BUT SOMEONE CAME TO ME AND SAID, ‘THAT’S IT.’ I’VE NEVER HAD A TIE IN MY LIFE BEFORE.”

But that’s not the main story. Jared Goff struggled through another pedestrian game, and finished 14-25 for 114 yards. That’s a 14.3 quarterback rating (QBR).

“Jared Goff is terrible (Charles Barkley voice). Myself and [Colin] Kaepernick can go on field this second and do better.”

This is an interesting debate Pryor brings up. Would the Lions be better off with Kap?

Let’s dismiss Pryor’s claim about himself right off the bat. For all of Goff’s shortcomings he’s had far more success as a quarterback than Pryor.

Goff led the Los Angeles Rams to the Super Bowl and is a two-time Pro Bowl player at quarterback. He has led the league in passing attempts. His career highs in passing yards and touchdowns thrown all dwarf Pryor’s.

Pryor has never been a starting quarterback for an entire season and has a below average 56 percent completion percentage. He did, however, become a 1,000-yard receiver in 2016 for the Cleveland Browns, which was a remarkable transition.

But Goff is the better quarterback.

That brings us to Colin Kaepernick. The blackballed former quarterback turned civil rights activist last threw an NFL pass in 2016. That was five seasons ago.

During Kap’s tenure as the San Francisco 49ers’ starting quarterback, he led the team to a Super Bowl Berth and a subsequent NFC Championship game appearance. He was becoming the face of a new wave of NFL quarterback. A true dual threat.