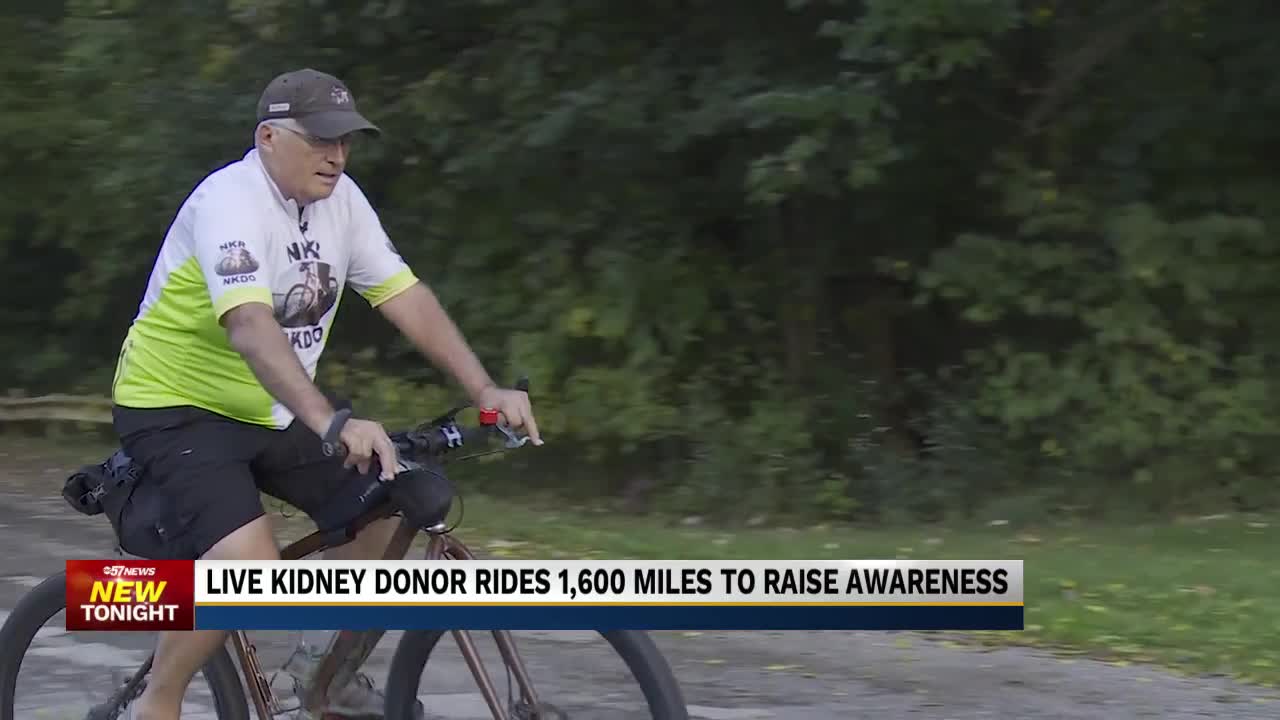 NEW BUFFALO, Mi –A kidney donor from Madison, Wisconsin travels 1,600 miles from Massachusetts to bring awareness for those in need of a kidney.

65 year old Mark Scotch is more than a marathon cyclist, he’s a living kidney donor and after donating his right kidney in September of 2020, he wanted to go the extra mile.

“When I decided to become a donor that was just kind of a split decision,” said Mark Scotch

That split decision would save the life of 56 year old Hugh Smith.

The two met at a bar inside of a small town in Louisiana as complete strangers in 2020.

Later, Scotch was matched with someone in need of a kidney in New York and even though Scotch wasn’t a match for Smith, he became a voucher donor moving him up on the list of 100,000 people.

“So, I knew you could donate a kidney and live, I just didn’t know how well you could live – and because I’m pretty active with endurance sports, I thought to myself well I’m still going to donate a kidney, even if I have to change my lifestyle,” said Scotch

After giving his kidney, the plan was to get back on the road for a larger purpose.

“To do the ride, I decided that not enough people knew about some of the things we learned,” said Scotch.

Things that Scotch would take on his first journey in the Spring of 2021 when he rode his bike from Madison, Wisconsin to the town in Louisiana where he met Hugh Smith, for a total of 1,500 miles.

Now in the fall Scotch is on a 1,600 mile journey, starting in Martha Vineyard, Massachusetts on September 19th and stopping in Plover, Wisconsin on October 16th.

The journey bringing him right through Michigan.

“Thirteen people die every day, because of lack o kidney transplant, so my wife and I decided to turn the ride into an awareness ride just to educate people,” said Scotch.

He is bringing that awareness to the doorsteps and sharing it with other donors.

Such as the family he is staying with on Saturday night, who opened their home to Mark and his wife.

“As a former kidney donor, myself, what a better way to help another kidney donor that’s doing something amazing to raise awareness for kidney donations, I mean I couldn’t say no,” said donor Christina Montana

“The most important thing to know is that you can donate a kidney, save someone’s life, and still go back to your life, whatever that was,” said Scotch.

Mark is set to hit the pavement again Sunday morning from St. Joseph, Michigan and travel to Muskeg on, Michigan to continue his 1,600 mile ride.