Makeshift USMNT lucky to escape Jamaica with a point 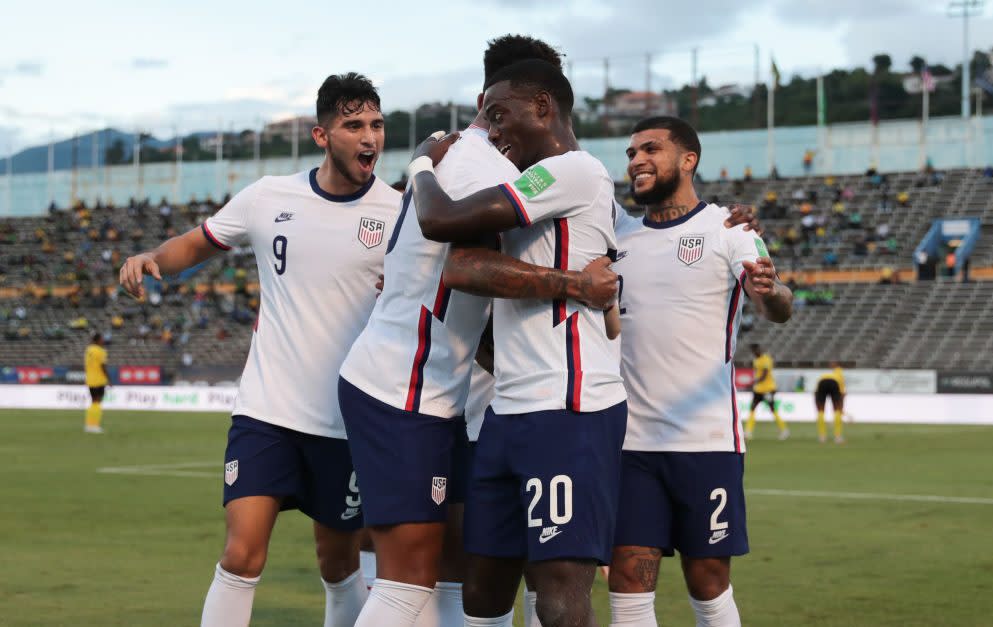 The USMNT were without plenty of regular stars in Jamaica. But they did have plenty of luck in their 1-1 draw.

These are the kind of points which get you to a World Cup.

Gregg Berhalter was without Sergino Dest and Gio Reyna with injury for this camp, plus Christian Pulisic was only fit to play a bit-part role off the bench and Miles Robinson and Weston McKennie were suspended for the trip to Kingston. Let’s remember that.

All things considered a 1-1 draw on the road at Jamaica isn’t a bad result. But it could have been much worse.

The second-youngest starting XI in the USMNT’s World Cup qualifying history started well and controlled most of the first half, as Tim Weah scored a beautiful early goal to set them on their way.

However, Michail Antonio’s incredible long-range goal grabbed a deserved point for the Reggae Boyz and they will be rueing a big miss and a questionable call in the second half as they should have won.

USMNT slip into old habits, let off the hook

The second half display will concern Gregg Berhalter.

Especially with road games at Canada, Mexico and Costa Rica still to come on their road to reaching the 2022 World Cup in Qatar.

“Difficult game. Jamaica played very direct,” Berhalter said. “They have really good physical presence up top and was collecting the second balls in a good way. It made it difficult for us. We got the first goal and then Jamaica equalized with a class goal from Antonio. Both teams fought hard in the conditions and we will take a point from this game.”

Berhalter sounded relieved to be leaving Kingston with a point. And so he should.

Jamaica pinned the U.S. back in the second half and should have secured a comeback win. After draws at Panama and Honduras earlier in qualifying, this result was the same and the performance was slightly better. But not by much. Youngsters Tim Weah, Gianluca Busio and Chris Richards all stepped up, but Zack Steffen, DeAndre Yedlin and Antonee Robinson all struggled a few days after excelling against Mexico.

As for Jamaica, the Caribbean nation will rue an awful miss from Bobby Decordova-Reid from close range in the second half and will be fuming about an officiating call as they looked to have won it late on.

Damion Lowe had header ruled out inexplicably for a slight push on Walker Zimmerman, as replays showed he barely pushed the USMNT defender and his header should have stood.

“I didn’t get to see the goal that got called back… But I know he whistled early,” Berhalter said.

With no VAR in CONCACAF World Cup qualifying, the USMNT knew they got away with one and were happy to sneak out of ‘The Office’ in Kingston with a point.

Without several key players the USMNT were hanging on in the second half as they missed the drive of McKennie in midfield, the savvy of Reyna, the relentless running of Dest and the presence of Robinson.

Get those four players back in, along with a fully-fit Pulisic, and things will look a lot better than this. With big players out, you need a bit of luck to get you through.

The USMNT are still in a very good spot in qualifying (15 points from eight games) and look almost certain to at least secure fourth-place and the playoff spot.

All they have to do is win their home games and draw on the road and they will reach the World Cup. No problems.

But with Canada, Mexico and Costa Rica on the road to come, how many points will the USMNT pick up there? If they play like they did against Jamaica, probably one if they’re lucky.

Then again, it appears that the USMNT’s luck is in compared to their last World Cup qualifying campaign when several unfortunate (and some unjust) turn of events went against them on the final day of qualifying in 2017. Four years on, lady luck is shining on the Stars and Stripes. It did against Costa Rica last month and it definitely was at Jamaica. But how long will that last?

With key players likely back for the January qualifiers at home against El Salvador and away at Canada, then another home game in early February against Honduras, Berhalter’s boys negotiated a tough hurdle at Jamaica.

But they’re still in the mix with Mexico, Canada and Panama to finish in the top three and when asked about the USMNT being close to securing qualification to the World Cup, this was Berhalter’s response.

“We don’t take anything for granted. The next window is going to be an important window and we just want to keep pushing forward,” Berhalter said. “The guys have adapted. You see tonight, it was a very difficult game and we were able to hang in there and get the point that we needed on the road. Overall, happy with the group and we continue to improve and get better.”

This wasn’t the USMNT’s best display but it was a good result. That, and a healthy dose of luck, is important.

Makeshift USMNT lucky to escape Jamaica with a point originally appeared on NBCSports.com