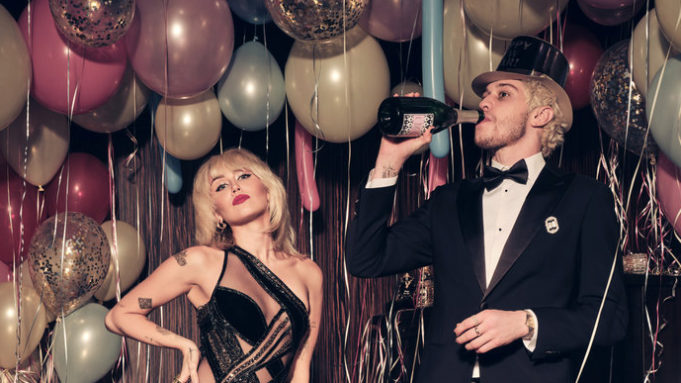 NBC is courting millennial and Gen-Z demographics with its New Year’s Eve centerpiece, “Miley’s New Year’s Eve Party, Hosted by Miley Cyrus and Pete Davidson.” The live special is airing Friday, Dec. 31 from 10:30 p.m.-12:30 a.m. ET on NBC, with a livestream on Peacock.

The Miami-based event opened with Davidson and Cyrus rapping a lengthy parody version of Will Smith’s “Miami,” with Davidson joking that Bill Cosby and Kevin Spacey might show up to celebrate. Shots of fans moving their masks to the side to vape in the crowd immediately followed, setting the tone for the night.

After a short joint monologue with jokes about COVID and crying along to Cyrus’ songs (who hasn’t?!), the duo introduced an upbeat performance of “Tap In” and “Icy Chain” from Saweetie, complete with masked backup dancers. The music continued with a quick transition to Anitta performing “Faking Love,” with a return from Saweetie for the feature.

Davidson returned after the commercial to give a bit of standup about feeling out of place at such a cool event, and then kicked it over to performance from Cyrus and Brandi Carlile of the latter’s 2007 single “The Story,” and following up with a duet on Cyrus’ 2009 hit “The Climb.”

Jack Harlow continued with a performance of the lyrics-heavy “SUVs (Black on Black),” quickly transitioning into his enormous hit “Whats Poppin” and the Lil Nas X collaboration “Industry Baby.”

Davidson and Cyrus followed with a fun pretaped sketch about how their storied drug use and wild behavior (and Davidson’s Staten Island heritage!) are a “show for the cameras.”

“You can’t tell anyone this: I’ve never actually smoked pot before,” Cyrus quipped, skewering her reputation as a major head. The two also confessed to having fake tattoos (“These are like stickers I buy from Claire’s,” Cyrus confessed of her copious body art). “I’m not even from Staten Island,” responded Davidson, who toplined the 2020 autobiographical drama “The King of Staten Island.”

Cyrus followed the sketch with a faithfully retro rendition of Blondie’s 1978 hit “Heart of Glass” and a rendition of her 2013 tune “Plastic Hearts.”

Rising rapper 24kGoldn, decked out in a pinstriped suit sprinkled with rhinestones, followed with a soulful rendition of his recent hit “More Than Friends.”

Cyrus returned to perform a duet with her younger sister, singer Noah Cyrus, on Dolly Parton’s haunting 1974 country classic “Jolene.” LIke Parton, the Cyrus sisters are natives of Tennessee. Anitta followed that pair with a spirited performance of “Faking Love.”

As the clock ticked down at four minutes to midnight ET, Davidson took center stage to engage with audience members. Given the struggles of the past year with the pandemic and other ills, the “SNL” star suggested the crowd think back to 2009 and the big events of that year, which included the “miracle on the Hudson” plane landing in New York by veteran pilot Chelsey “Sully” Sullenberger and a hijacking drama on the high seas on a merchant vessel that ended with bravery by the crew led by Captain Richard Phillips.

“We had nothing to worry about,” Davidson joked about 2009. “It was a great year for guys who would later be played by Tom Hanks but a bad year for pirates and geese.”

Cyrus then took the stage to perform her hits “We Can’t Stop” and “Party in the U.S.A.” In the special’s final quarter-hour, singer-songwriter Brandi Carlisle delivered a crowd-pleasing version of Bonnie Tyler’s anthemic 1983 smash “Total Eclipse of the Heart.”

Miley delivered the closing showstopper and told the crowd that pulling off the special was “all about flexibility.”

“Let’s bring that into the new year with us,” Cyrus said. The special closed with a chryon slate featuring the quote “Every ending is a New Beginning.”

“Miley’s New Year’s Eve Party” was crafted to capitalize on Cyrus and Davidson’s outspoken personalities, with the former describing the special on a Jimmy Fallon segment as, “He’ll be funny and I’ll be naked, and together we’ve got a show.” Special guests for the night include Brandi Carlile, Billie Joe Armstrong, Saweetie, Anitta, Jack Harlow, 24kGoldn and Kitty Ca$h. “Saturday Night Live” creator and executive producer (and Davidson’s boss) Lorne Michaels executive produced this special.

In addition to his work on “Saturday Night Live,” Davidson had a busy 2021, with appearances in James Gunn’s superhero film “The Suicide Squad,” the police procedural “The Rookie” and a leading voice performance in the animated comedy “The Freak Brothers.” Up next are roles in the slasher “Bodies, Bodies, Bodies” and the Kaley Cuoco rom-com “Meet Cute.” Meanwhile, Cyrus collaborated with a wide range of artists on new music in 2021, including Lil Nas X, the Kid Laroi, Elton John and Yo-Yo Ma.

Watch Cyrus and Davidson speak to Fallon about planning the special below: