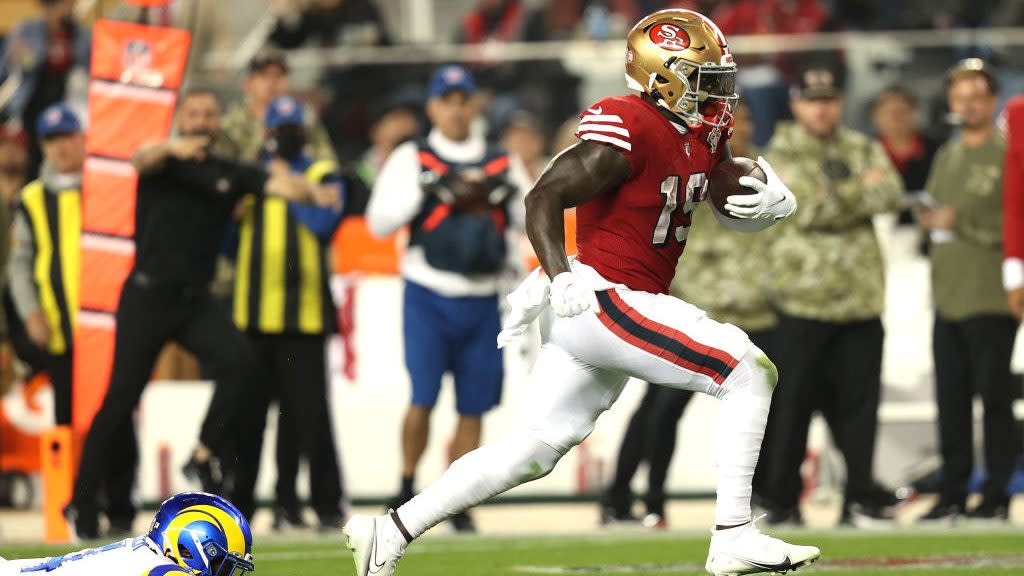 Deebo Samuel amassed 133 yards from scrimmage with a pair of touchdowns — one rushing and one receiving — as the San Francisco 49ers throttled the Los Angeles Rams 31-10 on Monday night.

The Rams have now authored two straight duds after last week’s 28-16 loss to the Tennessee Titans where they were outplayed across the board as well.

Matthew Stafford was intercepted on each of the Rams’ first two possessions. A deep pass intended for new addition Odell Beckham Jr. was picked off by safety Jimmie Ward. The 49ers then marched on a seemingly endless 18-play drive that covered 93 yards before Jimmy Garoppolo found George Kittle on an 8-yard touchdown to take an early 7-0 lead.

Ward struck again for the 49ers as he picked off Stafford for a second time on a pass intended for Tyler Higbee and returned it for a 27-yard touchdown and a 14-0 lead.

Los Angles got on the board as Stafford and Higbee connected on a 10-yard touchdown to cut the lead to 14-7. But the 49ers answered again with another lengthy scoring drive. Samuel’s 8-yard touchdown run capped an 11-play, 91-yard drive for San Francisco as they grabbed a 21-7 lead with 5:24 left in the first half.

The Rams put themselves in position to score before the end of the half. However, Sean McVay decided on a fake field goal try that resulted in punter Johnny Hekker completing a pass to Kendall Blanton well short of the sticks for a turnover on downs.

The Rams went three-and-out on each of their three possessions in the third quarter while Robbie Gould added a 50-yards field goal for San Francisco to push the lead to 24-7. With the clock running short, the Rams tried to convert a fourth-and-goal from the 49ers’ 11-yard line with just over six minutes left to play only for Stafford to throw incomplete to Van Jefferson for another turnover on downs.

Samuel then slashed his way through the Rams defense on a 40-yard catch-and-run on a pass from Garoppolo that iced the game away for the 49ers with a 31-7 advantage.

The Rams would again drive inside the 49ers’ 10-yard line and leave without a touchdown. A sack of Stafford from Nick Bosa forced a 37-yard field goal from Matt Gay as the Rams futilely cut the lead to 31-10.

Stafford completed 26 of 41 passes for 243 yards with a touchdown and two interceptions for the Rams. Cooper Kupp carried the load for the Rams with 11 catches for 122 yards. Beckham caught just two passes for 18 yards in his first action with the team since signing late in the week after his release from the Cleveland Browns.

Garoppolo was 15 of 19 for 182 yards and two touchdowns for the 49ers. Elijah Mitchell rushed for 91 yards on 27 attempts as well for San Francisco.