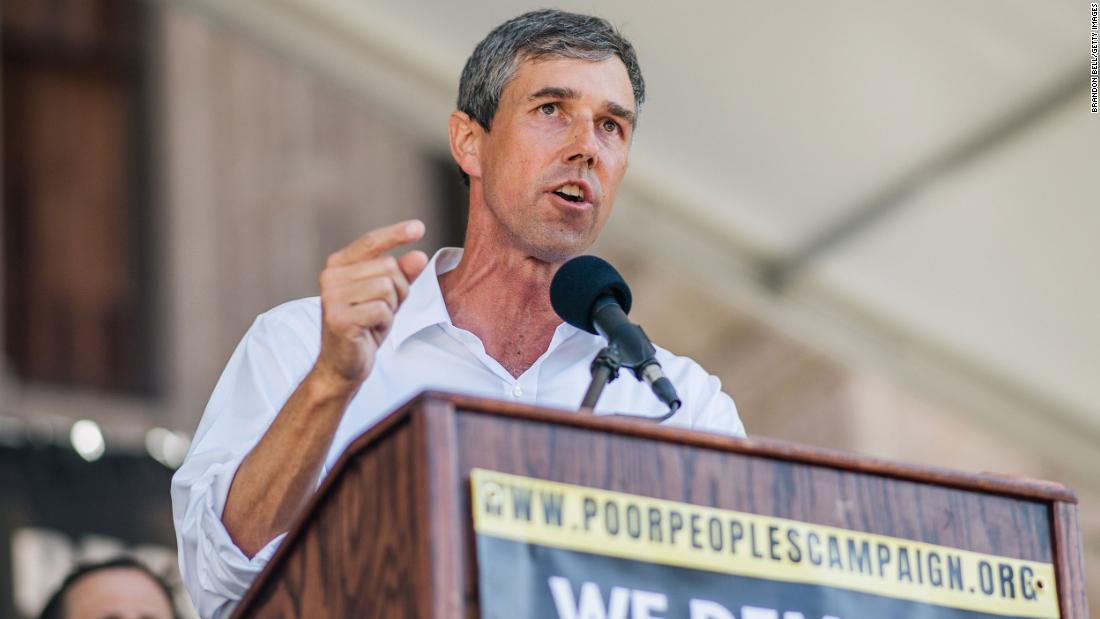 “I’m running for governor,” he tweeted alongside a video announcement. “Together, we can push past the small and divisive politics that we see in Texas today — and get back to the big, bold vision that used to define Texas. A Texas big enough for all of us.”
In launching a campaign that many Democrats in Texas had identified as the party’s only chance of denying Abbott a third term, O’Rourke — an El Paso native and former punk rocker who launched an internet services company and served on the city council before being elected to Congress in 2011 — is making his third run for office in four years.

His first statewide run in Texas, a long-shot Senate campaign against Republican Ted Cruz in 2018, electrified Democrats in a state where the party has rarely been competitive for a generation.

He rose from little-known congressman to fundraising dynamo, setting what at the time was the all-time record for money raised for a Senate bid. And he did it with a relatively bare-bones campaign structure, mostly driving himself to campaign events across the state with two staffers and live-streaming it all on Facebook.

O’Rourke’s near-miss in the Senate race — he finished less than 3 percentage points behind Cruz — led to a short-lived presidential run the following year. By the time he dropped out of the race in October 2019, Democrats in Texas were already publicly musing about him as a candidate for governor in 2022.

This time, though, O’Rourke faces longer odds. In 2018, with then-President Donald Trump in the White House, the political environment was extremely favorable for Democrats. In 2022, amid the Biden presidency, it’s Republicans who hope the midterm electorate will sweep them into power in Washington and statehouses.

In the two-minute video announcing his campaign, O’Rourke used the February failure of the Texas power grid during a severe winter storm to criticize Abbott’s leadership, saying those without power and water were “abandoned by those that were elected to serve and look out for them.”

“When the electricity grid failed and those in power failed all of us, it was the people of Texas who were willing to put their differences behind them and get to work doing the job at hand, which meant helping our fellow Texans get through that crisis,” he said. “We did that out of a sense of duty and responsibility to one another. Now imagine if the governor of Texas felt that same way.”

He said Abbott and Republicans in Austin have failed to tackle larger issues, including expanding Medicaid, legalizing marijuana, improving the electricity grid and improving schools.

“Instead, they’re focusing on the kind of extremist policies around abortion or permitless carry or even in our schools that really only divide us and keep us apart and stop us from working together on the truly big things that we want to achieve for one another,” he said. “It’s a really small vision for a big state. But it doesn’t have to be that way.”

O’Rourke’s support in Texas remains deep among Democratic loyalists, many of whom never took down their white-and-black “Beto” yard signs and bumper stickers. But with Democrats on defense across a much larger playing field, it’s not clear he’ll be able to tap into the same kind of national fundraising resources he did in 2018.

Still, O’Rourke has pointed himself toward a showdown with Abbott for months.

He has harshly criticized the governor’s handling of the coronavirus pandemic, the new law that effectively outlaws abortions in Texas, the state’s restrictive new voting law and more.

In social media posts, emails to his political group Powered by People and live-streams, he has hammered Abbott. In March, live-streaming on Facebook from his mother’s house, O’Rourke lambasted Abbott’s handling of a winter storm that shut down huge portions of the Texas power grid and said the governor had taken actions that were “unconscionable, unforgivable,” in ending his mask mandate and allowing all businesses to open at full capacity.

“Our governor has checked out of the fight. He’s surrendered to the virus. He’s going to allow it to run rampant in this state,” O’Rourke said in the video. “We are now on our own. But we are not on our own alone — we are on our own together. And that might be some cold comfort, but let’s take what we’ve got right now and let’s work together.”

In October, when Abbott banned all businesses in the state from imposing Covid-19 vaccine mandates, O’Rourke was similarly critical.

“Abbott’s latest anti-science, anti-public health order is creating more chaos and more confusion,” he said on Twitter. “Businesses need every tool at their disposal to survive the pandemic and keep workers and customers safe.”

One question O’Rourke would face if he attempts another statewide run in Texas is whether his disappointing presidential run, and the positions he took during the campaign, would hurt him.

In the wake of a white supremacist gunman targeting Latinos and killing 23 people at an El Paso Walmart in August 2019, O’Rourke said assault weapons should be outlawed and the government should confiscate those currently legally owned.
“Hell yes, we’re going to take your AR-15, your AK-47,” he said in a September 2019 presidential debate. “We’re not going to allow it to be used against our fellow Americans anymore.”
But in Texas, where guns are ingrained in the state’s culture and mythology, Republicans say those comments — as well as progressive positions he took on immigration, including saying he would tear down the wall between Mexico and Texas, telling reporters it has failed to make his hometown on the border any safer — would badly damage a future O’Rourke campaign.

Abbott has already used O’Rourke’s comments from the presidential race on issues like gun control, the Green New Deal, health care reform, immigration and the Black Lives Matter movement — generally out of context — in an ad series he has posted on YouTube called “Wrong Way O’Rourke.”

The Republican Governors Association similarly previewed those lines of attack against O’Rourke in a statement that pointed to policies he advocated as a presidential candidate.

“Texas voters have already rejected Beto O’Rourke for statewide office, and they’ll do so again now that they know just how radical he really is,” said RGA spokesperson Joanna Rodriguez. “Beto 2.0 vowed to confiscate the firearms of law-abiding citizens, pledged to tear down physical barriers along the border, and supported regulations that would kill over a million jobs across the state and raise taxes and the cost of living on families and small businesses. There’s no telling how far Beto 3.0 will go in his vain attempt to stay relevant after running out of promotions to chase in Washington.”

This story has been updated with additional information.