Some analysts say the flights could be seen as a warning to Taiwan’s president ahead of the island’s national day.

However, democratic Taiwan sees itself as a sovereign state.

In an essay for Foreign Affairs magazine on Tuesday, Taiwan’s President Tsai Ing-wen warned there would be “catastrophic” consequences for peace and democracy in Asia if the island were to fall to China.

“It would signal that in today’s global contest of values, authoritarianism has the upper hand over democracy,” she wrote.

Ms Tsai added that while Taiwan did not seek confrontation, Taiwan would “do whatever it takes to defend itself”.

Taiwan has been reporting for more than a year that China’s air force has been repeatedly flying nearby. 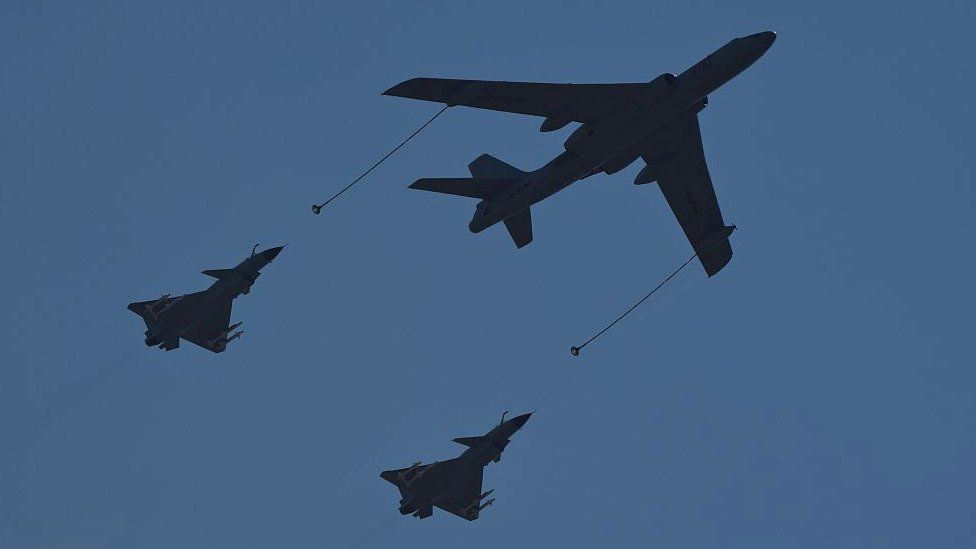 The latest Chinese mission included 34 J-16 fighters and 12 nuclear-capable H-6 bombers, which all flew in an area near the Taiwan-controlled Pratas Islands, according to a map provided by the Taiwanese government.

Four more Chinese fighters were spotted late on Monday, taking the total to 56 aircraft in one day.

“China is the culprit for causing tensions between the two sides of the (Taiwan) Strait and it has further threatened regional security and order,” he added, saying Taiwan “will never compromise and yield” to threats.

In response, China accused Washington of being the provocateurs, while warning against supporting Taiwanese independence.

The US should stop supporting and “inflating” Taiwan separatist forces, it added.

Analysts have previously warned that Beijing is becoming increasingly concerned that Taiwan’s government is moving the island towards a formal declaration of independence and wanted to warn President Tsai against taking steps in that direction.

Ms Tsai, however, has repeatedly said that Taiwan is already an independent state, making any formal declaration unnecessary.

The island has its own constitution, military, and democratically elected leaders.

China has not ruled out the possible use of force to achieve unification with Taiwan.

China and Taiwan: The basics