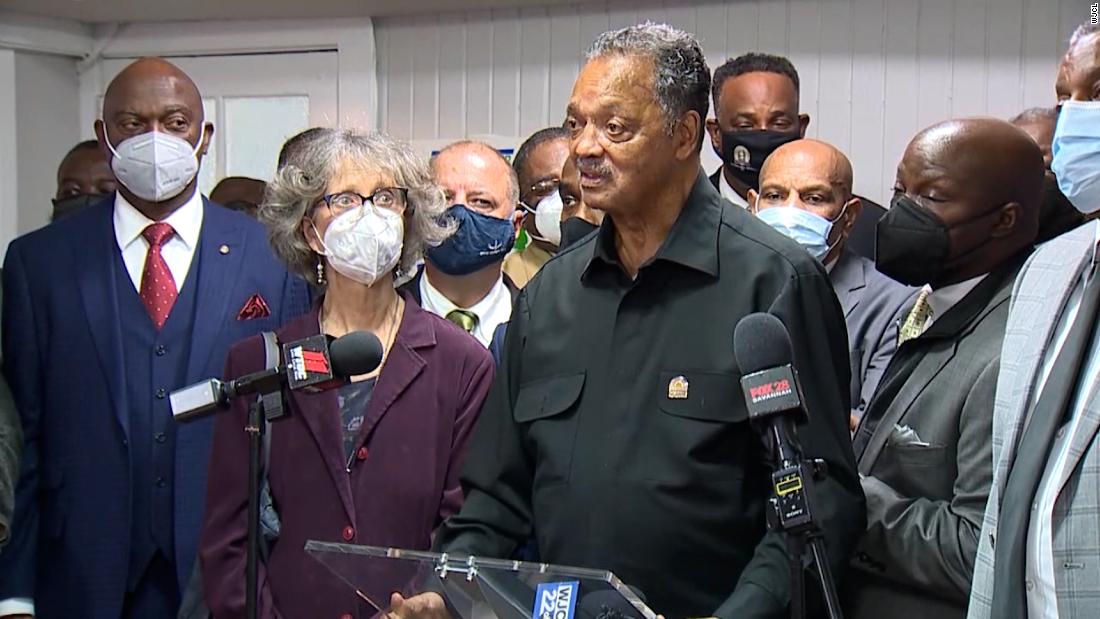 Jackson arrived at the Glynn County Courthouse with Marcus Arbery Sr., Ahmaud Arbery’s father and Barbara Arnwine of the Transformative Justice Coalition. Jackson sat in the courtroom with Arbery’s parents.

Lawyers for all three defendants asked the judge to declare a mistrial in the late morning, but Judge Timothy Walmsley denied those motions.

Defense attorney Kevin Gough complained that Jackson’s presence distracted and unduly influenced the jury because Jackson is “an icon in the civil rights movement.”

Lawyer Jason Sheffield said the displaying of a photo of Arbery apparently caused weeping in the courtroom and the emotion of the moment was compounded by Jackson’s presence.

The judge said emotions in a courtroom are neither “unexpected or unreasonable” and how to handle it is left up to discretion of the court.

Jackson’s attendance followed comments made by Gough Thursday in court. He said “we don’t want any more Black pastors coming in here or other Jesse Jackson, whoever was in here earlier this week, sitting with the victim’s family trying to influence a jury in this case.”

Gough apologized for his comments, but the fallout has already brought further attention to a trial where race has been a key focus. Three White men are on trial for chasing and killing a Black man, and 11 of the 12 jurors in majority-White Glynn County are White.

On Monday morning, before testimony resumed, Gough asked the judge to order a court employee to preserve a record of people in the courtroom the jurors could see, in case any of the three defendants are convicted and an appeal is filed. Walmsley denied that motion, too.

Travis McMichael, his father Gregory McMichael and William “Roddie” Bryan Jr. are charged with malice and felony murder in connection with the killing of Arbery in Brunswick on February 23, 2020. They also face charges of aggravated assault, false imprisonment and criminal attempt to commit a felony. All have pleaded not guilty. If convicted, each man could face life in prison without the possibility of parole.

Arbery’s family has said he was out for a jog when he was shot and killed, while defense attorneys state the three men were attempting to make a citizen’s arrest before Travis McMichael shot Arbery in self-defense.

During a news conference Sunday afternoon in Savannah, Jackson said he planned on being at the courthouse in Brunswick on Monday.

“And we were invited there last week by the defense attorney,” Jackson added, referring to Bryan’s attorney, Gough. Jackson has not been at the courthouse since the start of the trial.

Civil rights leader Rev. Al Sharpton had joined Arbery’s parents and held their hands to pray together during a break in Wednesday’s court proceedings.

Gough said Thursday he had “nothing personally against” Sharpton but decried bringing “high-profile members of the African American community into the courtroom to sit with the family during the trial in the presence of the jury,” adding, “that’s intimidating and it’s an attempt to pressure.”

Gough said on Friday, “I will let the court know that if my statements yesterday were overly broad, I will follow up with a more specific motion on Monday putting those concerns in the proper context. And my apologies to anyone who might have inadvertently been offended.”

The judge had told Gough he did not object to Sharpton taking the place of an Arbery family member in court as long as there were no disruptions.

Sheffield, an attorney for Travis McMichael, said Friday that Gough’s comment was “totally asinine. Ridiculous,” and said, “In no way do we want to exclude anybody from this process.”

The trial continued Monday with testimony from an agent who interviewed Bryan on two occasions more than two months after the shooting. The interviews were conducted while Gough was present.

Georgia Bureau of Investigation Assistant Special Agent in Charge Jason Seacrist testified last week that Bryan told him during a May 11, 2020, interview that he knew Gregory McMichael from seeing him around the neighborhood but said he did not know his son Travis.

Bryan had followed the McMichaels as the trio pursued Arbery in their vehicles, with Bryan videotaping the moment Travis McMichael and Arbery wrestled over McMichael’s firearm before Arbery was shot.

In a May 13, 2020, interview, Bryan told Seacrist he was doing work on his porch when the sound of someone running and a vehicle engine caught his attention, the agent testified.

Bryan told the agent he said, “You got him? You need help?” but not loudly, and said he did not believe anybody heard him, according to the interview transcript.

Bryan said in the interview he then grabbed his keys, “I guess just to go see what was going on, if anything needed to be done, if I could help,” according to the transcript.

“I’m thinking through my mind that maybe he’s done something, the guy running,” Bryan said, according to the interview transcript.

Bryan said he tried to slow down Arbery during the chase to get a picture of him, so “something would happen in the end other than just him getting away and cops not knowing who he was.” Seacrist testified he asked Bryan why police would need to know who Arbery was.

“Because I figured he had done something wrong,” Bryan responded, according to the transcript. “I didn’t know for sure.”

When the agent asked Bryan what made him think Arbery had done something wrong, Bryan said, “It was just instinct man, I don’t know,” according to the interview transcript.

“I figured he stole something,” Bryan later added, according to the transcript.

Defense attorneys began their cross-examination late Friday and questioned Seacrist for more than an hour before court adjourned for the weekend.

The confrontation between the McMichaels and Arbery on the day of the shooting came minutes after a neighbor called police to say Arbery was at homeowner Larry English Jr’s property that afternoon.

A police officer testified Friday that English had contacted authorities numerous times in the months before the shooting about trespassers on his property — which was undergoing construction — and English had provided video of an unidentified individual on the premises.

Gregory McMichael, investigators testified, said he initiated the pursuit that led to the shooting after seeing Arbery speedily run by McMichael’s home, and he believed Arbery matched the description of someone who’d been recorded at the construction site in the past.

But prosecution witnesses have testified McMichael did not know at the time Arbery was at the site that day or whether the man in English’s surveillance videos had ever stolen anything.
The prosecution has said surveillance videos show Arbery at the site multiple times but always without breaking in and without incident. In his deposition, English denied he ever authorized the McMichaels to confront anybody on the construction site.