Shakira is defending her decision to perform for the 2020 Super Bowl halftime show.

The hip-shaking superstar, 44, was asked by Cosmopolitan about taking the gig. While it was historic — co-headlining with Jennifer Lopez made it the first time two Latina women starred on that stage — and got rave reviews, the pair took the job on the heels of other artists, including Rihanna and Cardi B, turning it down in support of Colin Kaepernick.

“J.Lo, as a Latina born in the U.S., and me, as a Latin American woman in the U.S., had a huge responsibility and opportunity to represent all different minorities through our performance,” the “Whenever, Wherever” songstress, 44, told the outlet. “In my case, I also wanted to pay homage to my Middle Eastern culture. I feel that we did it.”

She went on to admit, “It wasn’t an easy show to put together. There was a lot of work behind it, a lot of stress. But it was one of the highlights of my career.”

Shakira said she’s “the type of person who really needs to genuinely believe in what I do or I’d rather pass.” For her, the Super Bowl show was “a great opportunity to make a strong statement about what an important part of the American fabric the Latino community is. An opportunity that we couldn’t miss.”

With her first album coming out when she was just 13, Shakira said she’s “proud of having succeeded on my own terms. When I first came out, there wasn’t really an audience for Latin pop or Latin female pop artists.” She purposely “didn’t make the music I made just to please a type of audience or to accommodate a specific need of the market. I did what felt honest.” 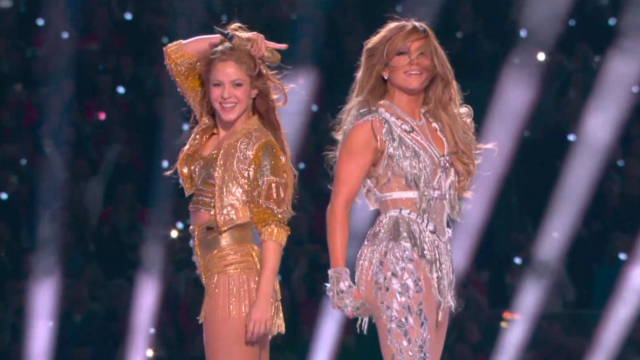 When she entered the U.S. market, it was important to her to “honor my Latin roots.” As she did, she faced “prejudice.”

“Many magazines would put emphasis on the fact that I was Colombian,” she said. “I was called the second finest export of Colombia. I guess they were referring to cocaine as the first one. I was like, Why are journalists asking me about drug trafficking? My country’s so much more than that… I wonder sometimes what would happen if a media outlet said similar things about me today. Back then, the gatekeepers could get away with stuff like that.”

So she was especially proud to take the Super Bowl stage and “introduce champeta, a street dance that belongs to a virtually unknown corner of my country. I’m always trying to be unafraid through my career.”

Kaepernick, who was quarterback for the San Francisco 49ers, protested racial injustice and police brutality by taking a knee during the national anthem of his NFL games. In 2017, he opted out of his contract with his team — and hasn’t been hired by another team since. In 2019, he reached a settlement with the NFL after alleging that league teams colluded to deny him a contract after his controversial protests.

As all this played out, Rihanna turned down the 2019 show, giving the reason that she “stands with the players and Colin Kaepernick.” Cardi B did the same thing for the same reason. That year, the NFL ended up booking Maroon 5 with Travis Scott, but then forged a partnership after with Jay-Z’s Roc Nation. Now Hova is behind the booking for the league’s important music events, including the halftime show.