Takeaways from the Rams’ lopsided loss to the 49ers 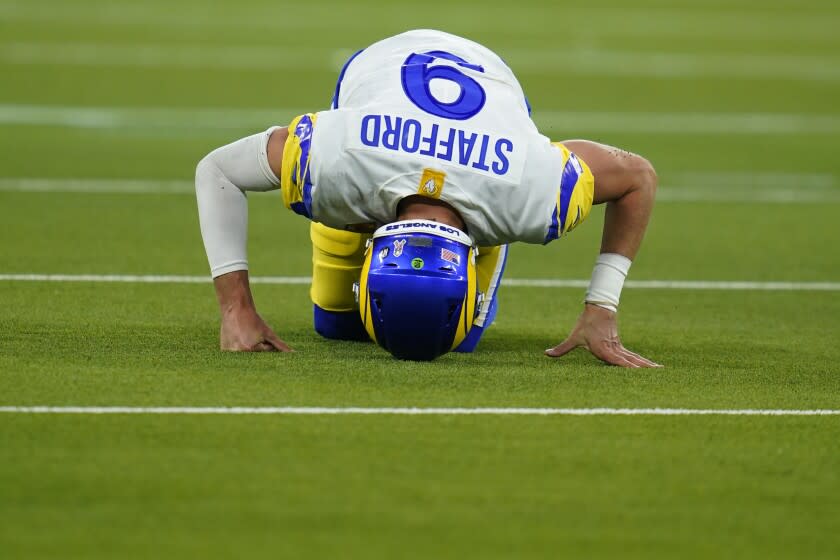 The Rams’ record fell to 7-3 with a 31-10 defeat by the San Francisco 49ers at Levi’s Stadium on Monday night.

Here’s what we learned from the loss:

The Rams got pushed around … again

For the second game in a row, the Rams’ opponent asserted dominance.

On their first possession, the 49ers launched an 18-play scoring drive. Yes, that is not a typo. Kyle Shanahan’s team ate up more than 11 minutes running 18 soul-sucking plays.

The Rams, the NFL leaders in sacks, got to 49ers quarterback Jimmy Garoppolo only twice and did not force a turnover.

The Rams offensive line, which gave up five sacks in a loss to the Tennessee Titans, gave up only two against the 49ers. The linemen did not have much chance to assert themselves: McVay called only 10 running plays.

Stafford had four passes intercepted in the first eight games.

He matched that total in the last two.

On Monday, he misfired on a deep pass to Odell Beckham Jr. It was clearly a bad decision.

But the second interception, which bounced off Tyler Higbee’s hands, was not Stafford’s fault.

Stafford is one of the best quarterbacks in the NFL at engineering comebacks. However, he cannot keep putting the Rams in holes too deep to climb out of.

The loss of Robert Woods goes beyond the passing game

We knew that Woods’ season-ending knee injury would have far-reaching effects.

But we didn’t expect them to be revealed so quickly.

Despite the next-man-up mantra, rookie Ben Skowronek cannot be expected to replace Woods, who excels as a pass catcher, runner and blocker. Neither can Beckham.

Woods’ absence does not account for dropped passes by receivers.

Cooper Kupp caught 11 passes for 122 yards — but he also was not immune from drops.

Odell Beckham Jr. will be fine

McVay did not waste any time getting Beckham involved. Stafford completed a five-yard pass to him on the first play.

Beckham also caught a pass for a 13-yard gain. He played 15 snaps.

Nothing spectacular, but it was a good start for a player who had exactly one day of practice.

With an open date this week and a week of practice before the Rams play the Green Bay Packers, Beckham has time to absorb more of the playbook and acclimate to Stafford and other teammates.

Von Miller is excited about contributing

Miller did not play against the Tennessee Titans because he was still recovering from an ankle sprain, but he played 45 snaps against the 49ers.

Miller made three tackles, one for a loss.

After the game, he spoke enthusiastically about teaming with Aaron Donald and playing in the same stadium where he earned most valuable player honors in Super Bowl 50.

Like Beckham, Miller now has more time to acclimate before facing Aaron Rodgers and the Packers.

Johnny Hekker can still sling it

Unfortunately for the Rams, Blanton was tackled short of the first down.

Why McVay opted to entrust Hekker rather than Stafford to convert a fourth-down opportunity inside the 20-yard line is a mystery.