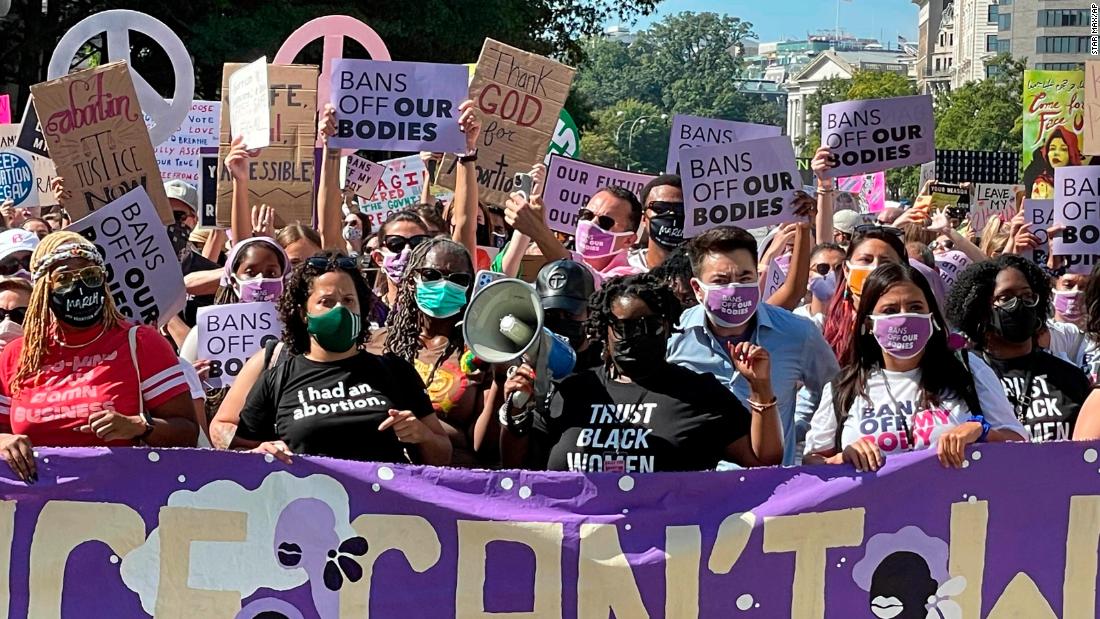 “I knew that I was not ready to go through with the pregnancy,” McLean said. “I was still a child myself.”

McLean, now 31, still believes she made the right choice. She was able to finish college, pursue her career goals and now has a job as a social worker for the Texas Equal Access Fund.

But with recent threats to abortion rights in states such as Texas and Mississippi, McLean worries that other women, particularly Black women who already face higher rates of complications and death during pregnancy and childbirth, won’t have the same access to abortion.
Both Texas and Mississippi are in ongoing legal battles over abortion rights. On Friday, a federal appeals court put a temporary hold on a judge’s order that had blocked Texas’ six-week abortion ban. Meanwhile, on Dec. 1 the Supreme Court is set to hear a case involving a 2018 Mississippi law that bans abortions after 15 weeks of pregnancy. The ban was blocked by federal courts after the Jackson Women’s Health Organization, the state’s lone abortion clinic, filed a legal challenge.

Advocates say the bans will disproportionately impact Black women who will be forced to carry their pregnancies to term despite potential health risks and will be left with few options for abortion care if they don’t have the means to travel out of state for the procedure or raise a child.

The concern has been raised by lawmakers such as Rep. Cora Bush who last month shared her personal experience getting an abortion after she was raped and became pregnant as a teenager.
Bush recalled feeling like she’d be unable to raise child at 18 and said she experienced discrimination when she sought health care for her pregnancy.

“To all the Black women and girls who have had abortions or will have abortions, we have nothing to be ashamed of. We live in a society that has failed to legislate love and justice for us. So we deserve better. We demand better. We are worthy of better,” the Missouri congresswoman said. “So that’s why I’m here to tell my story.”

‘Preparing for the worst’

As the block on Texas’ six-week ban was short-lived last week, abortion rights advocates and providers said their fight continues.

Monica Simpson, executive director of Sister Song, said she recognises that anti-abortion groups and lawmakers are still working hard to outlaw abortions at the state and federal level.

She plans to focus her attention on Mississippi in the coming weeks, building collective power to show the Supreme Court that abortion access is critical.

“I think we have to look at this with very clear eyes and not with rose-coloured glasses,” Simpson said. “Even the Supreme Court is not set up in our flavor and we have to be honest about these things.”

Monogamy Conner, executive director of the Texas Equal Access Fund, said in the last month, the state’s abortion ban caused “unique and devastating harm” to Texans seeking care. Her organisation, she said, received an influx of calls from panicked women requesting help finding abortion care in other states as well as funds to travel and get the procedure.

Conner said about 74% of the women who call her organisation for financial help with abortion procedures are Black. And Black women, she said, are more likely to struggle with access to health care.

“Everyone should be able to get abortion care when they need it — without stigma or harassment,” Conner said last week. “These extremists are relentless, but so are we. We will continue to fight back against these politically motivated efforts to control our bodies and lives, and we will continue our work to ensure that all people in Texas who need abortions can get them.”

Preparing for another court battle

At Mississippi’s Jackson Women’s Health Organisation, the majority of the patients are Black women and many of them low income, said Shannon Brewer who heads the clinic.

It is the only abortion clinic in the state and is housed in a pink building in the majority Black city of Jackson. The city is 82% Black and 16% White. And 25% of the population lives in poverty.

Patients travel from across the state by car, bus and even Tuber to get abortions at the clinic, Brewer said. Some pregnant women never make it because they can’t find transportation. Brewer said her staff was overwhelmed with women from Texas calling to schedule abortions when the state’s ban went into effect.

If the conservative majority Supreme Court rules in flavor of Mississippi’s 15-week ban, it would disproportionately impact Black women in the state, particularly those who often can’t afford to go to a private physician or travel for abortions, Brewer said.

Jackson Women’s Health Organisation has been fighting for years to protect abortion access in Mississippi. In 2018, the clinic sued to block a 15-week abortion ban in Mississippi and a federal judge ruled in its flavor.

In the Supreme Court case, the state is asking justices to overturn Roe v. Wade, a 1973 landmark decision that protects a woman’s right to legally access abortion.

Brewer said she is “hoping for the best but preparing for the worst” in the case.

“I feel very uneasy and I feel the Supreme Court should never have taken this case in the first place,” Brewer said. “I don’t feel like it’s fair. Roe v. Wade has already been set in place.”

Some activists argue that abortion bans are unfair because they strip Black and brown mothers of their right to forgo a pregnancy if they are concerned about health risks and quality of life for the baby.

Michelle Hope, an activist and founder of Mixed Moxie, a social impact firm focusing on the advancement of reproductive justice, said too often Black mos are bringing children into environments where there is poverty, joblessness, low quality schools, high incarceration rates and other socioeconomic issues.

Many also don’t have access to good reproductive health centres and their giving birth in states with high maternal death rates, she said. Texas has one of the highest maternal mortality rates in the country.

“All of these offences can be reasons why someone might choose not to carry a pregnancy to term,” Hope said. “There is this constant cycle of raising children in poverty.”