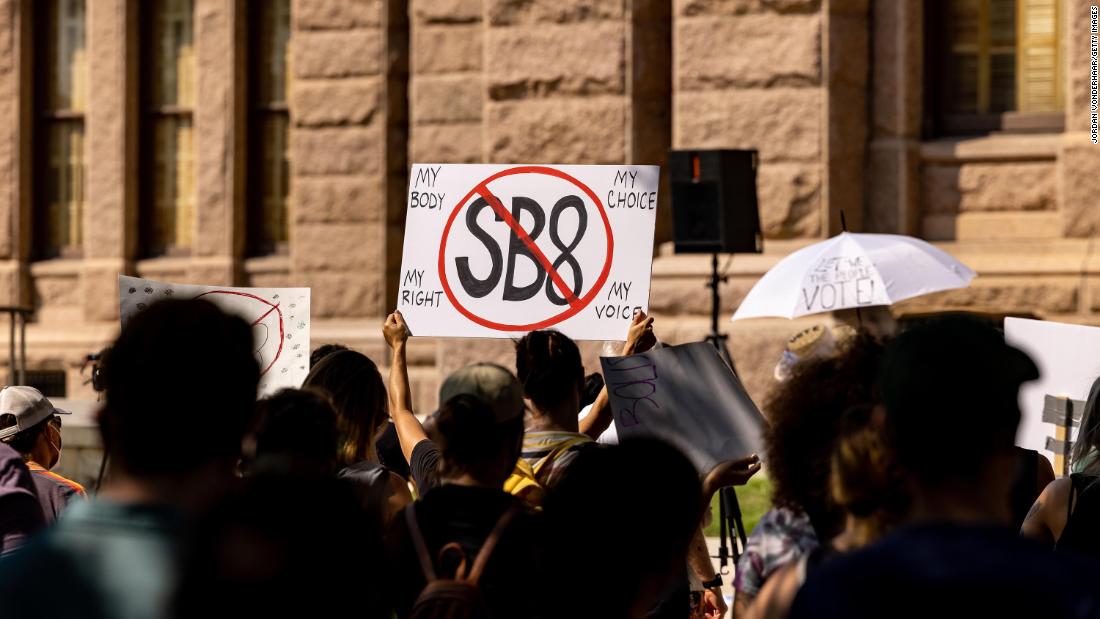 Every day working under this cruel law has been heartbreaking and unjust. One of my patients — who I had to turn away because she was more than six weeks pregnant — curled up and started to cry uncontrollably. All I could do was hold her hand.

Another patient canceled her graduate school admission interview in order to make it to her appointment, only to find out that she too was no longer eligible for an abortion under SB 8. She would now need to find a way to leave the state.

I saw another patient who had to leave her young child — who is undergoing treatment for cancer — to come straight to our health center. She did not want to delay her appointment for fear that she would be unable to get an abortion under the new law.

I could go on and on. There are so many stories of people whose lives have been damaged by this draconian law. Even the very rare moments of relief illustrate SB 8’s underlying brutality: when one of my patients found out she was still able to access an abortion under the new law, she just hugged me, sobbing and repeating the words “thank you.”

SB 8 has now been in effect — with one short respite — for weeks. On Friday, the US Department of Justice announced it would ask the US Supreme Court to block SB 8 after the Fifth Circuit Court of Appeals allowed the law to remain in effect.

This reality is most horrific for my patients, but it’s harrowing for me as well. Each time I have to deny a patient their right to an abortion — a safe and constitutionally protected medical procedure — I am being forced to carry out the state’s agenda, a radical agenda that was always about scoring a political victory.

Every time this happens, each instance is a moral injury. I am being forced to inflict pain on my patients when the reason I became a doctor is to heal and to help them. This law itself — designed to make it harder to challenge in federal court — turns communities against my patients and me by deputizing private citizens (from anywhere in the country) to bring a civil suit against anyone who helps a pregnant person to obtain an abortion in violation of the law.
Even before SB 8 went into effect, Texas already imposed stigmatizing and onerous mandates on people seeking abortion care. Every person has to receive a state-scripted lecture and medically inaccurate information, and almost all patients are forced to wait a minimum of 24 hours before they can have an abortion, requiring two separate visits to the health center.

Most of my patients are already mothers — and even though as parents they make countless decisions every day on behalf of their families, Texas apparently doesn’t trust them to make decisions about their own bodies and what is best for their families.

Earlier this month, when we had a brief reprieve from the abortion ban after a federal judge entered a preliminary injunction (calling SB 8 an “offensive deprivation”), our staff called patients and worked to schedule abortion appointments in multiple cities so that people didn’t have to leave Texas and travel hundreds of miles for abortion care.

For the patients who could make it to our health center when the injunction was in effect, it was an immense relief to access abortion safely in their community, rather than be forced to go out of state.

But many patients faced the familiar hurdles of accessing child care, getting time off work, and finding transportation, and weren’t able to access an abortion during that short time period.

Then, just 48 hours later, the 5th Circuit put a stay on the injunction and SB 8 was back in effect and remains so. We had to call back many of those same patients and tell them that yet again, we could not provide them the care they wanted and that we were trained to provide.
We’ve unfortunately experienced this kind of legal whiplash before. In the spring of 2020, Gov. Greg Abbott banned abortion at the onset of Covid-19 for approximately a month. We witnessed the disruption firsthand, as our services were turned on and off, and Texans were forced to travel hundreds of miles outside of the state — during a pandemic — to access an abortion.

At this moment, I am completely drained and terrified because there is no end in sight. I am an abortion provider because it is rewarding and important work. My patients trust me and count on me for safe, caring, and nonjudgmental treatment. I went through extensive medical training to be a resource for them, and nothing matters more to me than being able to provide them with medical care at such an important time.

But Texas’s abortion ban in effect says that none of this matters. According to statewide political officials, my medical skills and the needs of my patients don’t matter. The lives of Texans who are being put at risk are not important and neither am I. None of us are as important as the political victory being scored.

No health care provider should ever find themselves in this position. And, more importantly, no one seeking an abortion should either.