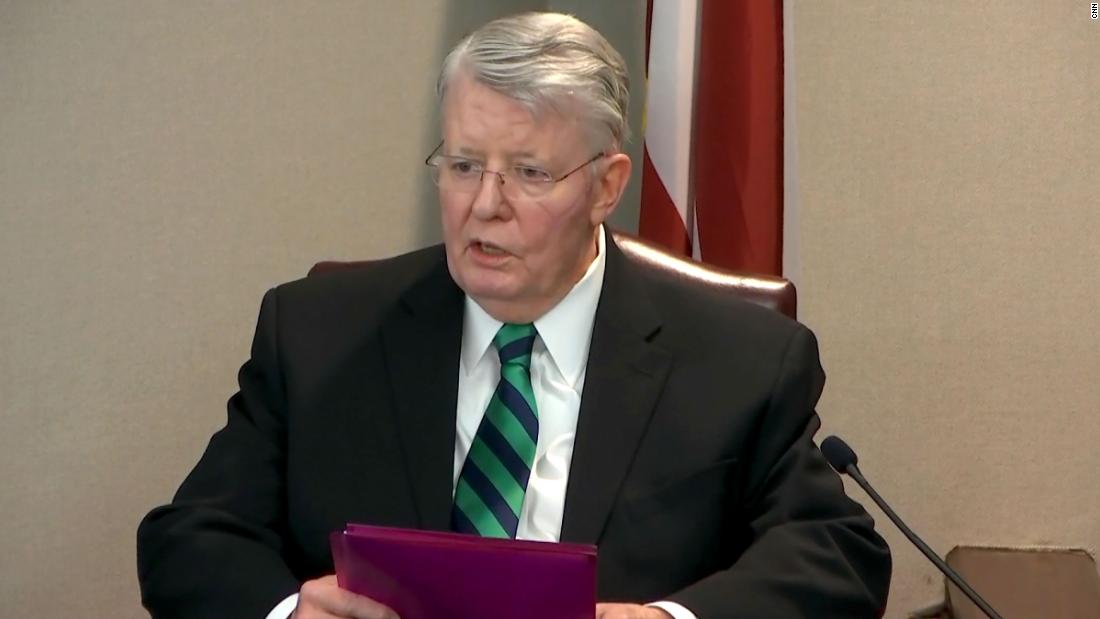 The jury has heard transcripts of interviews from all three of the accused, along with several clips of cell phone video of the shooting, and a frame-by-frame showing of the video.

The judge denied the motion.

Earlier Tuesday, the state called several witnesses, all employed by the Georgia Bureau of Investigation (GBI), to help explain evidence in the case entered into record.

Among them was Assistant Special Agent in Charge Richard Dial, the lead GBI investigator, who testified on the timeline of events in the case, once the state was requested to conduct an investigation on May 5, 2020.

Prosecutors presented maps showing the path traveled by Arbery and the defendants on the day of the shooting and showed the jury drone videos, taken by the GBI, of the area where the shooting happened, with Dial explaining what the drone video showed as it played in court.

Donoghue’s autopsy report from April 2020 did not detail the order in which Arbery’s gunshot wounds happened. But he testified Tuesday he could do so now, combining the autopsy with widely seen cell phone video taken by Bryan. Arbery and Travis McMichael can be seen in the video wrestling over the firearm before the shooting.

Though three shots were fired, only the first and third struck Arbery, Donoghue testified. The first not only grazed his right wrist — hitting an artery and causing severe bleeding — but also struck his center chest, he said.

While a tourniquet could have remedied the wrist injury, nothing could be done on scene to save Arbery’s life after either of the torso wounds, Donoghue said.

“It could be, yes,” Donoghue answered to both questions.

Donoghue testified he initially thought the distance between the gun and Arbery’s body was 3 to 4 feet when the gun fired, because he had not yet seen the cell phone video. However, having seen the video, he now believes the distance was 3 to 20 inches, or “close-range to near-contact.”

That dovetails with testimony from Monday, when a GBI firearms examiner testified Arbery was shot at close range.
The final shot effectively paralyzed Arbery’s left arm because it injured a complex of nerves. Donoghue pointed to video of Arbery’s hand, which had rotated to a position that indicates “Erb’s Palsy,” the type of nerve injury Donoghue said Arbery suffered.

In cross-examination, Donoghue testified he could see Arbery’s hand on the shotgun in still frames taken from the video.

And, he testified, even after the first gunshot wounded his wrist and chest, Arbery was able to hold onto the gun with one hand and hit Travis McMichael with the other, citing the video evidence.

An autopsy report, written by Donoghue, lists the manner of death as “homicide.” Arbery died “of multiple shotgun wounds sustained during a struggle for the shotgun,” the report says.

Thirteen shotgun pellets exited Arbery’s back, and 11 more were recovered from his wounds, the report says.

Defense attorney files motion about who appears in public gallery

Kevin Gough, the attorney for Bryan who apologized last week for arguing “we don’t want any more Black pastors coming in here” to potentially influence the jury, again raised concern Tuesday about who is allowed in the courtroom’s public gallery during trial.
Gough’s string of complaints began last week after the Rev. Al Sharpton joined Arbery’s parents and held their hands to pray together during a break in court proceedings. Gough objected again Monday, when civil rights leader the Rev. Jesse Jackson made his first appearance in the gallery of the courtroom in support of the Arbery family.

Gough told the court Tuesday morning — before jurors entered the courtroom for the day — he had filed a paper motion “to prohibit any further conduct that may intimidate or influence jurors, otherwise interfere with a fair trial.

‘It raises the same issues, perhaps with more authority than were raised previously,” Gough added.

Gough indicated the motion would raise the issue of whether the court should keep a record of who is in the courtroom.

On Monday morning, Gough had asked the judge to order a court employee to preserve a record of people in the courtroom the jurors could see, in case any of the three defendants are convicted and an appeal is filed. The judge denied the motion Monday.

On Tuesday morning, the judge said the court was “working through the issues presented,” and would “get you the court’s ruling as quickly as possible.” Details about the full motion weren’t immediately available.

Jackson spent a short time Wednesday in the courthouse’s overflow room before speaking to reporters outside, alongside Arbery’s father.

Having been in the courtroom on Monday, Jackson wanted to support the family without becoming a distraction, a source close to Jackson told CNN.

Outside the courthouse Tuesday, Jackson said Arbery’s family “has withstood lots of pain,” and the details and pictures displayed in court were “a lot to take.”

Sharpton has a rally and a march planned for Thursday, and Jackson has said he plans to be in court during the week.

Monday, Judge Timothy Walmsley said the court’s position — not making any blanket rules over attendance as long as everyone is respectful in court — had not changed. “It’s almost as if you’re just trying to continue this for purposes other than just bringing it to the court’s attention,” he said to Gough.

Walmsley on Monday called some of Gough’s previous comments “reprehensible” and stressed to all the attorneys their words were having an impact. He told them they needed to understand “that your words in this courtroom have an impact on a lot of what’s going on.”

The McMichaels, according to their attorneys, were trying to conduct a citizens arrest on Arbery, whom they suspected of burglary after neighbors became concerned about people entering an under-construction home.
The confrontation came minutes after a neighbor called police to say Arbery was at the under-construction home alone that afternoon. Gregory McMichael, investigators testified, said he initiated the pursuit after seeing Arbery run speedily by McMichael’s home, and he believed Arbery matched the description of someone who’d been recorded at the construction site before.
However, prosecution witnesses have testified McMichael did not know at the time of the chase that Arbery was at the site that day, or whether the man in the surveillance videos had ever taken anything from the construction site.
The prosecution has said videos do show Arbery at the site multiple times, including the day he was killed, but always without breaking in and without incident.
The owner of the under-contstruction home, Larry English Jr., testified in a September deposition — played for jurors last week — that he “probably” had told the McMichaels about incidents on his property. But English said he never authorized the McMichaels to confront anybody on the construction site.
Bryan, who joined the McMichaels’ chase in his own vehicle, recorded cell phone video of the pursuit and shooting. Prosecutors contend he struck Arbery with his vehicle during the pursuit.

In addition to malice and felony murder, the defendants also face charges of aggravated assault, false imprisonment and criminal attempt to commit a felony. All have pleaded not guilty. If convicted, each man could face life in prison without the possibility of parole.