What happens in Vegas? The KC Chiefs win. Here’s what we learned in their 41-14 victory 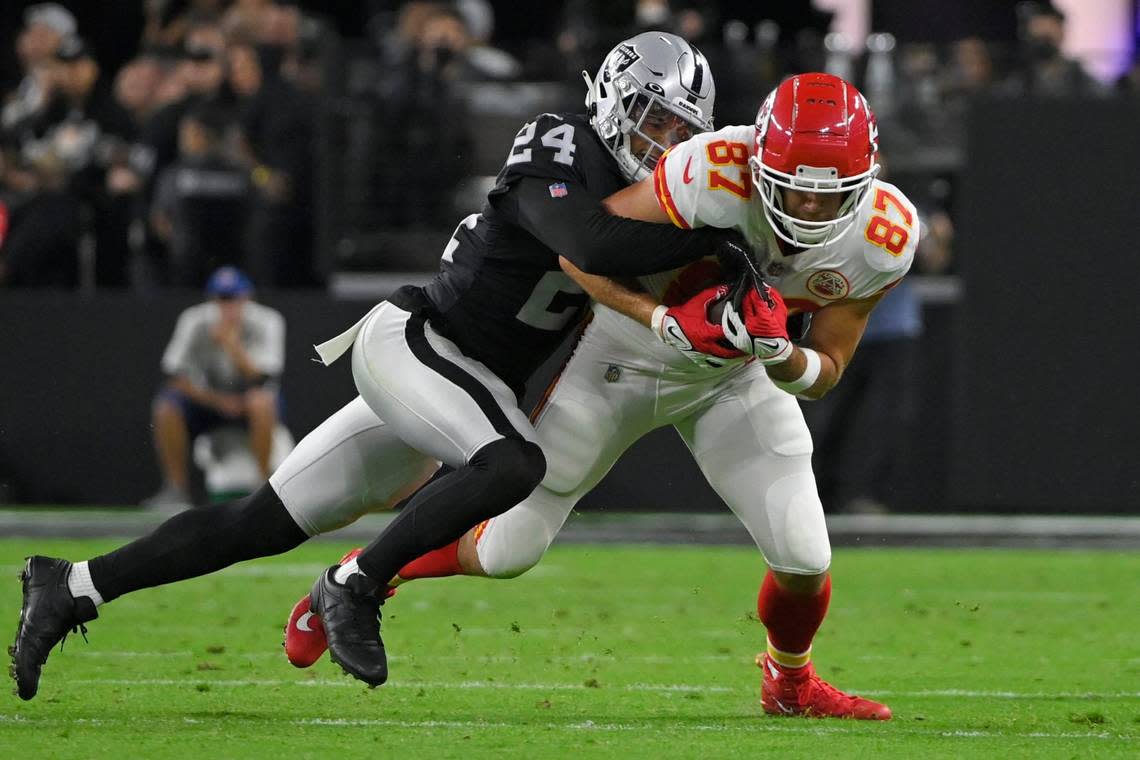 The Chiefs sure looked like the Chiefs of old Sunday night.

After plodding their way to a 5-4 record before Week 10, the Chiefs resembled the team many thought they would be entering the 2021 season. They came out firing on all cylinders, on both sides of the ball, and beat the Las Vegas Raiders 41-14 at Allegiant Stadium.

“It’s a good one to get against a talented football team,” Chiefs coach Andy Reid said.

Offense? No problem, to the tune of 516 total yards.

What about the defense? Well, there was that, too, as the Chiefs limited quarterback Derek Carr to 261 passing yards, 59 below his season game average, and held the Raiders to 299 overall.

“Defensively, I thought we really came out with a great plan,” Reid said. “The guys executed very well.”

Then there was special teams with punter Tommy Townsend executing a fake punt perfectly by completing a 16-yard pass to gain a first down. The Chiefs scored a touchdown three plays later.

“Listen, this probably goes for any team in this league but when all three phases are clicking, then you’re going to be tough to stop,” Reid said.

Add it all together, and the Chiefs had an impressive night. More important, the win improved their record to 6-4, tops in the AFC West a little more than a month after being in last place.

The Chiefs never lost faith in themselves, even with the slow start to the season, and it paid off.

“We’re coming out of this and we’ve got room to improve, and these guys, they believe in that,” Reid said. “That’s how they come out to practice. They got a confidence about them that they understand that if we put it all together, then good things can happen.”

Sunday’s convincing win also sent a message to the rest of the league that it’s always been foolish to count out the Chiefs.

Mahomes entered the evening without posting a passer rating above 91.0 in five straight games.

The dubious streak is over after Mahomes completed 35 of 50 passes for 406 yards and five touchdowns with no interceptions for a 127.6 passer rating.

Mahomes connected with Hill for two touchdowns, threw a 1-yard score to rookie tight end Noah Gray, found running back Darrel Williams for a 38-yards score, and capped off the touchdown frenzy with a 22-yard strike to wide receiver Byron Pringle.

The Chiefs’ quarterback hardly looked like himself though the first nine games of the regular season, but he looked perfectly fine against the Raiders.

Hill points out there was never any worry about Mahomes during any of the perceived struggles in the first half season.

Mahomes had averaged 313.6 yards passing and 2.5 touchdowns per game in his previous six career matchups against the Raiders. Those numbers will now go up.

With Mahomes going off, his top receivers posted excellent production. Hill finished the game with seven catches for 83 yards and two touchdowns on 10 targets, while tight end Travis Kelce hauled in eight catches for 119 yards on 10 targets.

The Chiefs posted seven explosive plays of 20 or more yards, six coming on Mahomes completions down the field.

The Raiders entered the game averaging 394.5 yards, sixth in the league, but nothing went right for them Sunday night because of the surging Chiefs’ defense.

Kansas City had two sacks and four quarterback hits, an interception and a fumble recovery.

The Chiefs will eventually get starting running back Clyde Edwards-Helaire into their lineup again, but Sunday showed that they don’t need to rush his recovery.

Williams, who has filled the role as the lead rusher in Edwards-Helaire’s place as he works his way back from a knee injury, gashed the Raiders with 144 total yards (101 receiving).

The Chiefs’ rusher did it all with physical, punishing runs and versatility as a receiver out of the backfield, hauling in nine catches on nine targets.

Sunday’s matchup against the Raiders’ run defense, which entered the game ranked 28th in the league, set up well for the Chiefs. Williams took full advantage of the opportunity.

O-LINE STEPS UP AGAINST DOUBLE TROUBLE

The Chiefs entered the game with concerns at right tackle.

Mike Remmers landed on injured reserve over the weekend and Lucas Niang was ruled out with an injury to his ribs. The duo’s absence meant that veteran Andrew Wylie would have the unenviable task of holding down Maxx Crosby, who entered the game with five sacks.

Crosby had his moments against Wylie with spin moves to get in the backfield and record two quarterback hits, but the Raiders’ pass rusher didn’t tally a sack.

The same applied on the left side of the Chiefs’ offensive line, where Orlando Brown squared off against Yannick Ngakoue. Ngakoue didn’t record a statistic in the game.

Games are won and lost in the trenches, and on this night, the Chiefs held the advantage.

Cornerback Charvarius Ward left the game in the second half.

“He had a bit of a stomach illness,” Reid said after that game.

Reid added that linebacker Willie Gay Jr. also dealt with an illness before the game.

The Chiefs return home to host the Dallas Cowboys in Week 11 action at GEHA Field at Arrowhead Stadium.