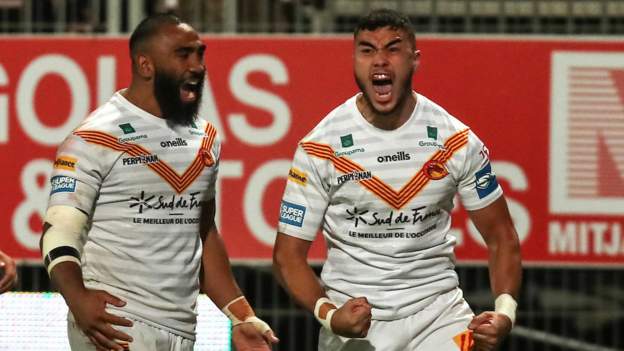 Catalans Dragons wrote themselves into Super League history by beating Hull KR in the play-off semi-finals to book their first Grand Final appearance.

They built a first-half lead through Ben Garcia and Josh Drinkwater tries before Shaun Kenny-Dowall got a late Rovers score before the hooter.

After the break, Catalans pulled away from the Robins with Arthur Mourgue, Fouad Yaha, and Joe Chantries.

Ryan Hall’s late effort was merely a consolation for the spirited visitors.

Catalans will play the winner of Friday’s second semi-final between St Helens and Leeds Rhinos on Saturday, 9 October at Old Trafford.

The anticipation of a first Grand Final for either of the two teams sparked a buzz in Perpignan, as the city got behind its team with a colorful, noisy sell-out crowd.

It made for a partisan atmosphere that not even the traveling Hull KR fans could match in their corner of the Stade Gilbert Brutus, as the play-offs crackled with energy.

Steve McNamara’s hosts played with precision, patience, and power, building pressure through their forward pack and earning the rewards through the kicking games of Drinkwater and James Maloney.

Even without the injured Sam Tomkins, they looked a threat – Drinkwater, in particular, following up his intercept try with perfect kicks to tee up Garcia and Chan scores, while Mourgue’s try came from Maloney’s bomb.

Despite the disappointment of defeat, Tony Smith’s men showed just why they are one of the division’s most entertaining sides. Merely reaching the last four was an impressive feat given the club finished bottom of the table last season.

Their free-spirited attacking style caused Catalans problems at times and it took immense defensive scramble and discipline to shut down the threat.

But the hosts never got dragged into the off-the-cuff tussle, keeping their cool and poise to beat Hull KR for a fourth time this season.

“I thought we put in one of our not-so-good performances in the first 40, we were well off with our skill level and sloppy with the ball.

“It was a well-deserved effort from Catalans, they got into their flow in the second half, they weren’t in great flow in the first.

“We were still in the game at half-time but unfortunately they came up with a whole load of kick plays which really hurt us and they took advantage of that.

“People out there were trying like anything to do the right thing for each other but we had one of those days where the passes go behind and even when we put up kicks that terrorized the full-back, the bounce went their way because they had more urgency.

“One of our challenges next season is to back up week after week, that’s where we want to get to but we’re making progress.”