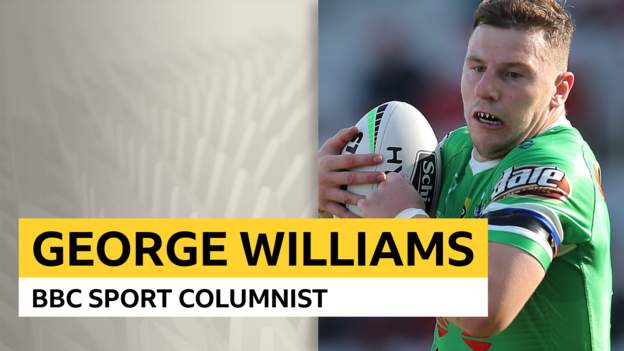 After 18 months with Canberra Raiders in the Australian National Rugby League, England half-back George Williams has returned home to be closer to his family, particularly as he and partner Charlotte are expecting a baby later this year. In his BBC Sport column, Williams talks about the factors behind the return to England and what the future holds for him in rugby league and life in general.

After what has been a crazy few weeks, we’re finally back in England after my release by Canberra Raiders.

It was pretty big news in Australia, a few tales were told and it ended up being a frustrating end.

It was a disappointing way to finish with the Raiders as I did enjoy it there, it was good and I was hoping to do good things there.

But everything happens for a reason, I suppose.

My missus is pregnant and we were struggling with homesickness, due to Covid really, and weren’t able to get home at the end of the year.

I’d asked for a release at the end of the year and the Raiders said no. I’d asked three times before it all went wrong. It got a bit messy.

The club has to do what’s best for the business, I’m not delusional about that, and they have to make a decision. I’m just glad I can put it all behind me, it’s all settled.

Even though it ended sourly, I’m happy with what I achieved, proud of what I did, and the life experience of playing in the NRL.

The positive is my partner is pregnant and we can have our kid at home around family and friends. It’s not all bad. We also brought our pug over too, we couldn’t leave him as he’s part of the family.

Sometimes in sport, it doesn’t go the way you’d want it to, it’s a life lesson for me and the Raiders probably too.

What went wrong with Ricky Stuart

Another hard part was what happened with Ricky Stuart – the Raiders head coach. For a long time, I couldn’t speak more highly of him. Everything from when I first got there, even up to the first conversations we had about homesickness.

When it actually came to me leaving, everything took a turn really. The talks, and texts, went back and forth. I was asked politely to leave at the end of the season, I wasn’t just saying: ‘I’m going to shoot off’, I had some discussions, I was trying to see what we could put in place.

I’m just sad that the relationship is pretty sour, I’ve not spoken to him since the release. He was brilliant and I’ll never forget that, but when things went bad he turned his back on me.

Becoming the focus of the media

It was pretty mad. Rugby league is a growing game over here and football is the main sport, but if you go over there, particularly in Sydney, it’s all about rugby league.

Everybody recognizes the players, it’s huge, just like a Manchester United footballer walking around Manchester.

Any story about a player makes the front page of the papers, it makes the news; you turn the TV on and your face is all over it and we’re not used to that kind of coverage in England.

That was a shock to the system. They’ve got to tell their side of the story I suppose, but I was disappointed how some of the stuff did reach the media.

I spoke to the club in-house, and I believe they leaked it to the media and that was disappointing.

It was a chance to be over the TV when you turn it on but that’s all over now. It’s dealt with.

The hardest part was saying goodbye to the lads. I’ve been there 18 months, you build friendships and the playing group is unbelievable.

You spend five or six days a week with these lads and they’re the closest thing you’ll get to a family.

Some spoke publicly in support of me and others sent me some really nice messages. I look back and smile about those friendships, and I’m sure I’ll stay in touch with those blokes for a very long time.

As for my old mate Ryan Sutton, he’s got his Aussie girlfriend so she’ll keep him in check.

Need to have family close

It was a bit tougher for Charlotte. The pregnancy made us realize that even more so.

She had friends there, and those who she will keep in touch with forever. But when we thought about it, what we wouldn’t have are the best friends or family who will pop round for an hour or two to help when you most need it.

That was a massive part of wanting to come home, Covid had a massive impact too. If it were normal times Charlie could have gone home but it’s just not possible, so we made a decision to go home and I stand by that 100%.

No regrets – ‘You have to chase the dream’

I don’t regret going to Australia because of how it ended and I would never put it in a bad light to a mate or another player. ‘Gilly’ [Oliver Gildart] is a really good friend of mine and he’s off to Wests Tigers next season.

You’ve got to go and chase your dreams and he’s doing that so good on him.

The one thing he will find different, as I’ve said, is the media coverage. But he’s a bit of a pretty boy so I’m sure he’ll like that – he’ll hate me for saying that.

He’ll see the difference straight away, especially going to a Sydney-based team, but I’m sure he’ll do well and I back him 100%.

I’ll miss the lads, not just at the club, the people who I met in the Canberra community – those who reached out and I made friendships with – some really good people.

I’ll also miss going to the beach every now and then, even if we went to Sydney for a shop. It was a good lifestyle to live.

And chicken schnitzels – they’re good. It’s simple pub food. It’s basically crumbed chicken but I miss having them because they don’t sell them over here. Every time I’d get one the lads would say ‘You having one of those again?!’. I was just making the most of it.

Looking to the future

I’m just looking forward now. I’m home. It was so good to see the family at the airport, there were a few tears and it was really nice – it made all the stress and drama all worth it as I knew I’d made the right decision.

The baby’s due in September so I can’t wait to be a dad, I’m sure it’ll be pretty hard but I’ll learn on the run.

Career-wise, I’ve still not signed for anybody yet despite the reports, but I am hoping to get back to playing as soon as I can, and as it’s a World Cup year I’m looking forward to that. I’ve got to produce some form and that’s a big goal of mine.

I’m just looking forward to the next part of my life now.